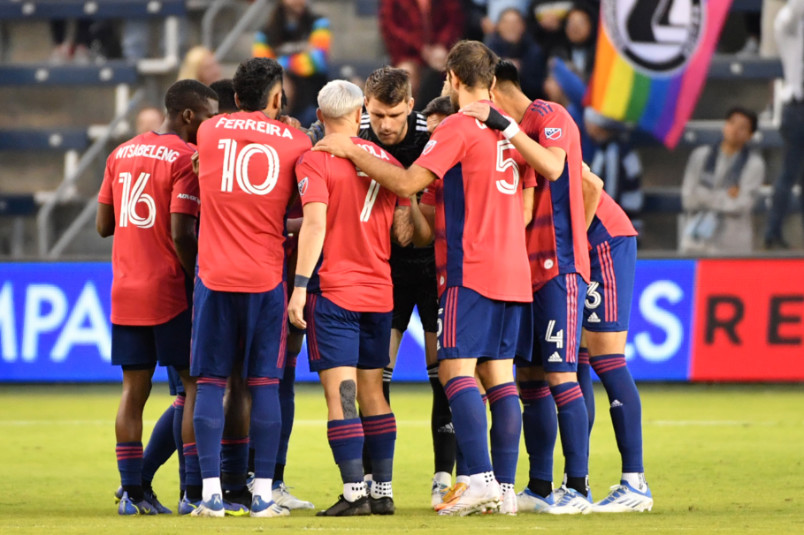 By Jason Davis – WASHINGTON, DC (May 18, 2022) US Soccer Players – If the end of the 2021 Major League Soccer regular season didn’t represent an existential crisis for FC Dallas, it presented questions trending in that direction. The club’s reputation as the country’s best developer of soccer talent was well-won through years of work. FC Dallas committed money and attention to creating a structure that lifted players through its ranks. The club invested, baking into its culture a willingness to give that young talent a chance with its first team. While that is no longer unique in MLS, FC Dallas remains a standard-bearer for its devotion to the player development cause.

Pride in the ability to turn out top professionals and help the USMNT, a stated goal of club president Dan Hunt. That went a long way in getting the club’s ownership a pass on the occasionally poor season. Throwing young players onto the field to better prepare them for their futures as stars for club and country naturally came with growing pains. Sometimes those growing pains meant missing the playoffs. Or worse, finishing at the bottom of the standings.

There was always bound to be a moment when the fans wouldn’t accept more failure, kids or no kids. It didn’t help that the Philadelphia Union seemed to have bettered the FC Dallas model, despite a commitment to similar principles of development and a modest payroll. Philadelphia was a contender while Dallas struggled.

Parting ways with head coach Luchi Gonzalez in September of 2021 was described by Hunt as an attempt to make a push for the playoffs. Though the club didn’t make the postseason, the move pointed to a new intent to win in Frisco. The club brought in USMNT assistant Nico Estevez, bringing in a strong resume from his time in his native Spain and with the Columbus Crew.

When the attention turned to 2022, FC Dallas didn’t hesitate to make big roster moves. It traded a fortune of allocation money for US international Paul Arriola. Signing 19-year-old Argentine attacker Alan Velasco broke the club’s transfer record. Signaling to the league and to the future stars currently making their way through its academy that the club is prepared to pay its best young talent when it inked USMNT forward Jesus Ferreira to a Designated Player contract. Ferreira is the first homegrown player in league history to sign a DP contract with the club that developed him. It’s no surprise that it was FC Dallas that made that bit of history.

Ferriera is the perfect focal point for the club’s new focus on winning. No one expects FC Dallas to change its priorities. Hunt’s consistent refrain about the club’s academy and the number of big-dollar transfers out of Frisco suggest that would be bad for business. Locking down a player good enough to break into the national team at 20 while layering on better use of player acquisition mechanisms allows FC Dallas to stay true to itself while improving its chances at trophies.

There are equal measures of good work and luck involved in bringing Ferreira and FC Dallas to this moment. The son of a former Dallas player comes through the academy and turns out to be good enough to earn the status of “franchise player” as the club pivots to a more aggressive approach to winning.

“Jesus is getting better and better every year,” FCD technical director Andre Zanotta said with the announcement of Ferriera’s new deal. “It’s a World Cup year and he’s being called up to the national team. For us, it’s really exciting to see his development and how mature he is right now. It’s great to have Jesus here for the long term and he deserves this new contract to become one of our Designated Players and to carry the number 10 on his back.”

The decision is already paying off. Aided by new head coach Nico Estevez’s system and a shift into the center forward position, Ferreira is making the leap to stardom. Last year he put up good, if not spectacular, numbers: eight goals and nine assists in 27 appearances playing behind Ricardo Pepi.

Ferreira set a new career-high for goals with nine through eleven games in 2022. That’s good enough to lead the league and put Ferreira in contention to win the first Golden Boot by an American since Chris Wondolowski in 2012. His goal-per-90-minutes is second only to DC United’s Ola Kamara, though Ferreira has played 450 more minutes than Kamara and at least 100 more minutes than every other player in the top nine for that category.

The arrivals of Velasco and Arriola have turned Dallas into a dynamic attacking team that keeps defenders on their heels. The club’s 3-1 win over the Galaxy in California on Saturday came from three goals in the first 23 minutes of the match, two of them scored by Ferreira. With the speed available on the wings, Ferreira will get his share of taps in like his first goal in LA.

The second goal, FC Dallas’s third, came from a turnover that FC Dallas used to spring Ferreira behind a pushed-up Galaxy back line. The young DP kept his composure, beat Galaxy keeper Jonathan Bond to the ball, and walked the ball into the net. The tally was a perfect summation of Ferreira’s season so far: Everything he’s done he’s made look easy.

FC Dallas’s second goal came from Arriola, who looks reinvigorated by his move to Frisco. The USMNT winger’s qualities are well known, but an injury-laded 2021 and the pressure of working under a first-year head coach in Hernan Losada muted his production. So far with FC Dallas, Arriola has looked dynamic and dangerous. The 27-year-old is a leader in a squad with a core of young players like Ferriera, Brandon Servania, Paxton Pomykal, and others.

The upshot of Ferreira’s fast start, Arriola’s quick adjustment to Texas, and the rest of the positive signs for FC Dallas is that there can be no grumbling about the team’s place in the table. Saturday’s win lifted FC Dallas into 2nd-place in the Western Conference, just a point behind 1st-place LAFC.

If a visit to Vancouver goes well on Wednesday night and the result of LAFC-Austin isn’t a win for the Californians, FC Dallas could wake up on Thursday morning on top of the table. It would be a well-deserved achievement built by a change in attitude in Frisco.

No one in Frisco would celebrate, of course. The season is long and nothing is guaranteed. Even making the playoffs can’t be assumed, not yet. Still, for the first time in years, fans in North Texas have reason to believe that their team isn’t just going through a good stretch of the season. FC Dallas is a contender.