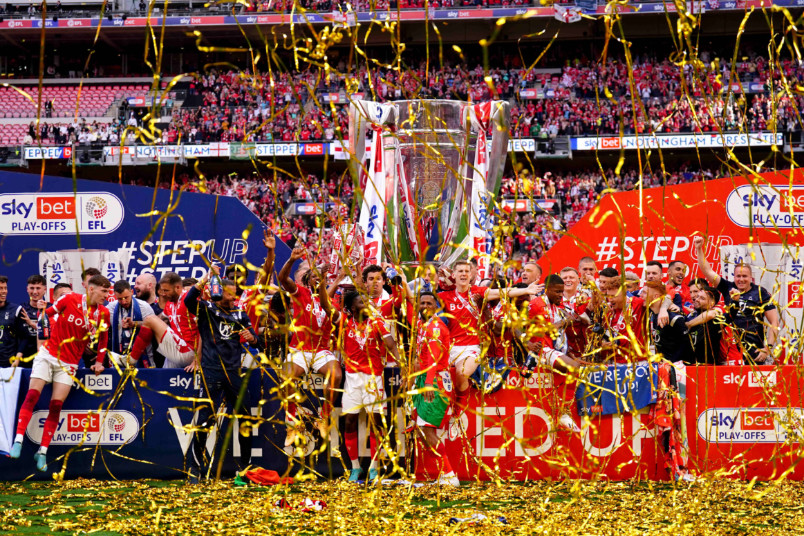 Tuesday’s soccer news starts with Ethan Horvath’s Nottingham Forest winning promotion to the Premier League. Forest beat Duane Homes’s Huddersfield Town 1-0 in front of just over 80,000 at Wembley. A 43rd minute own-goal was the difference. Horvath subbed on in the 89th minute for Forest and Holmes came on in the 66th for Huddersfield Town.

“The players have been incredible this season,” Nottingham Forest head coach Steve Cooper said. “They were at the very bottom and it is hard to get off the canvas, but they deserve it. We deserve to get promoted. The football that we’ve played, the young players who have thrived, scoring lots and lots of goals, keeping clean sheets. Every time we’ve had a setback, we’ve recovered. That’s what winners do. Nottingham turned out at Wembley, the supporters deserve this. It’s what they’ve been waiting for and it’s what they deserve. It’s a day to be proud of and they deserve to be back in the Premier League where we belong.”

Huddersfield Town finished 3rd in the Championship, two points ahead of 4th-place Nottingham Forest. Huddersfield Town knocked out Luton 2-1 on aggregate and Forest advanced past Sheffield United on penalties in the playoff semifinals.

“It was a very balanced game,” Huddersfield Town coach head coach Carlos Corberan said. “Both teams weren’t able to create enough chances. I think in the first-half we were more solid, in the second-half we were more aggressive…. I have the frustration with the result, but in all my players I didn’t find any gap or possibility to criticise, because for me today they were competing really well.”

“This is a difficult decision, but one we feel is best for the team at this time,” Charlotte FC investor/operator David Tepper said in a press statement. “I want to thank Miguel and his staff for their hard work during our first season and wish them the best in their future endeavors.”

Charlotte is in 8th-place in the Eastern Conference with 16 points from 14 games played, losing 2-1 at Seattle on Sunday. They trail 7th-place Inter Miami by two points.

The USMNT plays Morocco in a friendly on ESPN2 at 7:30pm.

Cup of Nations qualifying on beIN Sport: Ghana vs Madagascar at 3pm. Cup of Champions on FS1: Italy vs Argentina at 2:45pm. UEFA World Cup qualifying on ESPN2: Scotland vs Ukraine at 2:45pm ET.