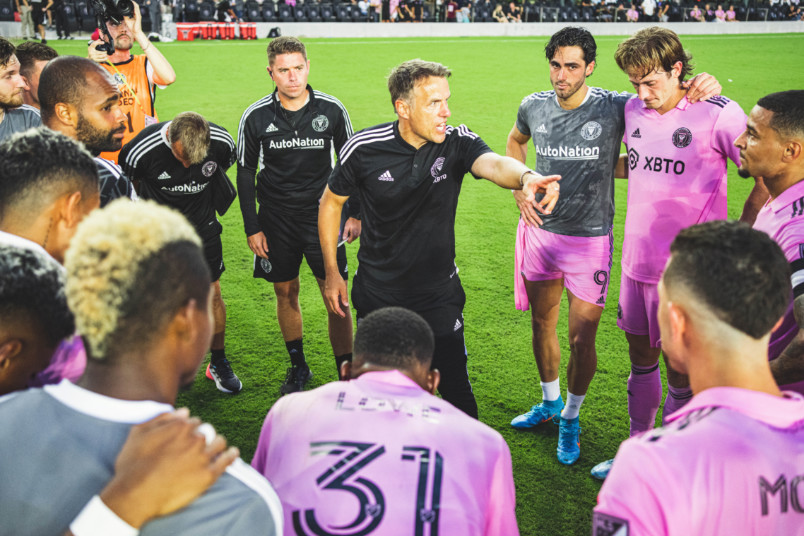 By Jason Davis – WASHINGTON, DC (May 25, 2022) US Soccer Players – For all the drama that followed the club for the first two seasons of its Major League Soccer existence, Inter Miami is suddenly decidedly ordinary. General manager Chris Henderson is working through a roster overhaul while second-year coach Phil Neville keeps the team within reach of the top-seven in the Eastern Conference.

So far, the biggest moment of 2022 for Inter came not on the field but in the chambers of the Miami City Commission. It was there on April 29 that four of the city’s five elected commissioners, the minimum needed, approved a plan for a soccer-specific stadium on the city’s western edge. The vote was the culmination of years of work from Inter Miami investor/operator Jorge Mas in particular and signals a bright future for a franchise with a short but difficult history.

For now, Inter Miami is working on its soccer product in Fort Lauderdale. Because of early mistakes, that has meant turning to a cadre of unheralded players with a sprinkling of better-known veterans. Neville’s team is holding its own in the Eastern Conference, not because of flashy names drawn to the glamorous South Florida location, but because of players anxious to prove they can play.

Much of that is a function of budget concerns. MLS handed Inter Miami a record-breaking sanction last season for evading limits on Designated Player-level contracts in its first year. The club lost $2.27 million in allocation money spread over the 2022 and 2023 seasons, prompting a reckoning over the roster.

Significant additions were few but did include US international DeAndre Yedlin, arriving in Miami after seven years spent playing in the English Premier League and the Super Lig in Turkey. Yedlin has been a rock for an Inter Miami team in flux, starting 12 games and ranking second on the team in minutes played. Neville can trust that Yedlin can man his position at a high level, leaving the coach to focus on other areas in the lineup. That meant resetting the attack.

The exits of Designated Players Rodolfo Pizarro on loan to Monterrey but still taking a DP slot and Blaise Matuidi means a club with big expectations and massive built-in advantages when recruiting famous names has just one DP left: Argentine striker Gonzalo Higuain.

How Neville is using Higuain this season speaks to this latest rebuild. In preseason, Inter Miami personnel talked up Higuain as a playmaker instead of the center forward he’s been for most of this career. The thought was that he would sit behind the lead attackers orchestrating play with his superior abilities on the ball. Instead, Neville opted to keep him at center-forward. When Higuain was out for three weeks in April with that injury, on-loan player Leo Campana moved into the starting center forward position. Campana rewarded his coach with a burst of goals, including a hat trick against New England on April 9.

With that piece suddenly in place, Higuain returned as a late threat. To his credit, Higuain appears invigorated by the new challenge handed to him by Neville. This is team soccer, doing what’s necessary to get results.

“I’m really pleased,” Neville said following Sunday’s 2-0 home win over the Red Bulls. “There’s a great spirit and togetherness there’s a great belief that we are headed in the right direction. We are now beginning to make DRV PNK Stadium a tough place to go.”

It’s worth asking if we’re seeing a broader change of approach for Miami. The club can certainly count on famous players in Europe showing interest in an MLS move if it means a South Florida address. As a host of other clubs have shown, signing the big draw doesn’t necessarily promise a shot at a title.

Henderson arrived from Seattle, a club that is known for making the right signing, not just the biggest one. The scarcity of Designated Player contracts and the impact DPs can have on a team demand a conscientious approach. Before 2022, Miami seemed more focused on bringing in the most famous player.

The story of Inter Miami in 2022 still has several chapters left. Whatever the club’s ending this season, the final page will be an interesting read.