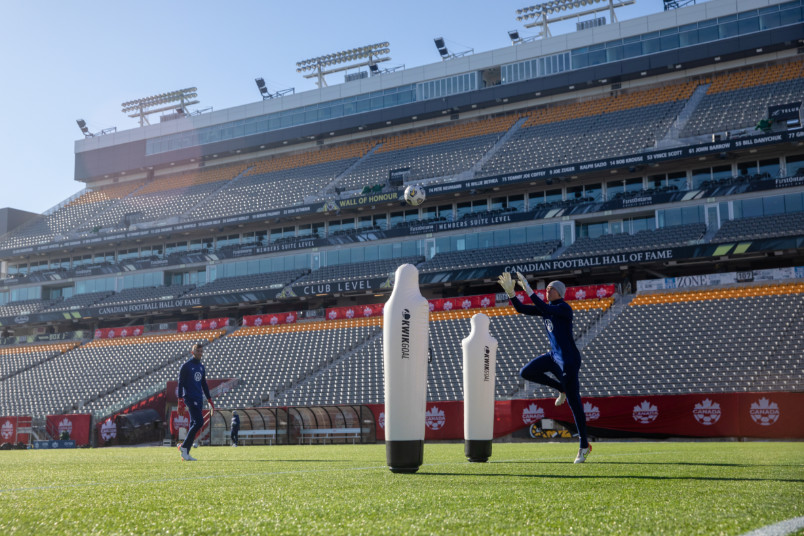 By Clemente Lisi – NEW YORK, NY (May 2, 2022) US Soccer Players – MLS has no shortage of great goalkeepers. It never has. This country has turned developing goalkeepers into almost a cliche. Add to that recruiting from overseas, and there’s an expectation in Major League Soccer. A competitive team needs a standout goalkeeper. That’s already holding in 2022.

For an MLS side to be successful, the choice of starting goalkeeper is an essential one, akin to a team’s defensive shape or choice of strikers. While there are various ways to gauge which shot stoppers are the best, a team’s overall record and a keeper’s goals-against average are the two major ways to tell the story.

The Philadelphia Union has the best in the Eastern Conference. However, they trail Western Conference leaders LAFC in the Supporters’ Shield race. While the Union drew 1-1 at Nashville on Saturday, LAFC picked up three more points with a 2-0 home win over Minnesota. A look at the goalkeeping of both these teams gives us a window into their early success.

The Union’s Andre Blake won MLS Goalkeeper of the Year in 2020 and has remained near the top of the list in this league. This season, the Jamaican international has conceded six goals in nine matches (four of those matches clean sheets) for a remarkable 0.66 goals-against average. LAFC’s Maxime Crepeau has given up eight goals in nine games, which includes three shutouts. Crepeau had signed with LAFC this past winter, leaving the Whitecaps after four seasons. LAFC tried goalkeeper by committee last season.

“We consider Maxime to be one of the top goalkeepers in MLS,” John Thorrington, LAFC’s co-president and general manager, said in January when Crepeau was signed. “Like us, we know he is committed to winning and his leadership and experience will contribute to our success on the field.”

Austin FC, who has surged in recent weeks and temporarily took hold of the Western Conference before LAFC’s win, has grabbed headlines because of their scoring. Fair enough, but goalkeeping remains one of the keys to their success. Starting keeper Brad Stuver has made nine appearances, giving up eight goals in the process. Stuver was subbed off nine minutes into Austin’s 2-1 win against the Houston Dynamo after suffering a laceration to his right knee.

Beyond these three, there are a few others who have shined early on this season using different metrics. Pedro Gallese of Orlando City ties with Chicago’s Gabriel Slonina for the league lead in shutouts with five. That’s part of what has helped propel Orlando to 3rd-place in the Eastern Conference, tied on points with the 2nd-place New York Red Bulls. For Gallese, his MLS exploits could very well result in a roster spot for his native Peru at the upcoming World Cup.

Matt Turner set a new standard last year with the New England Revolution. The Revs won the Supporters’ Shield in no small measure because Turner, who would win MLS Goalkeeper of the Year, had five shutouts and a save percentage of 72.3.

Turner may have given up 35 goals in 28 games, but his save percentage, combined with being on a team that scored 65 goals, made him a key contributor. As a result, Turner became a regular call up to the USMNT and signed a deal with Arsenal earlier this year that will take him to the Premier League for the 2022-23 season. Turner follows in the footsteps of other MLS keepers who ended up in England.

“At the end of the day, it’s going to be how I continue to progress,” Turner told reporters via Zoom this past February during MLS Media Day. “I will play in almost 20 games in the early parts of the season, and then get the move overseas and get to work in understanding a new culture, a new way of life, a different league, quality players from top to bottom that will really help me.”

Unavailable due to a foot injury, Turner got his first game this season over the weekend in a 2-0 shutout of Inter Miami. Turner’s absence in net may be why the Revs are 9th in the Eastern Conference, giving up a combined 16 goals in nine MLS games. Unfortunately for the Revolution, his move to Arsenal will leave them once again looking for goalkeeping stability later this season.

Sometimes success between the pipes is independent of a team’s overall performance. That’s the case with Slonina, who signed with the team at age 14 and made his MLS debut last season. In 2022, he played in nine games and given up just seven goals. His 70.8% save percentage is only a few points below last season’s 74.2, which also included giving up 16 goals in 11 games with a defense in front of him that wasn’t the sharpest.

Chicago is in 13th-place because they have only scored six goals. Slonina, meanwhile, has drawn interest from clubs in Europe, primarily England and Spain. Slonina has played for the USMNT at the Under-15, U-16, U-17 and U-20 levels, becoming part of the senior squad in December. The Fire recently announced that the team picked up his contract option for the 2023 season on the heels of his strong start this spring.

What Slonina represents is another generation of standout American talent getting his early experience in Major League Soccer. There’s a legacy of players that have done the same, going back to the league’s beginnings.