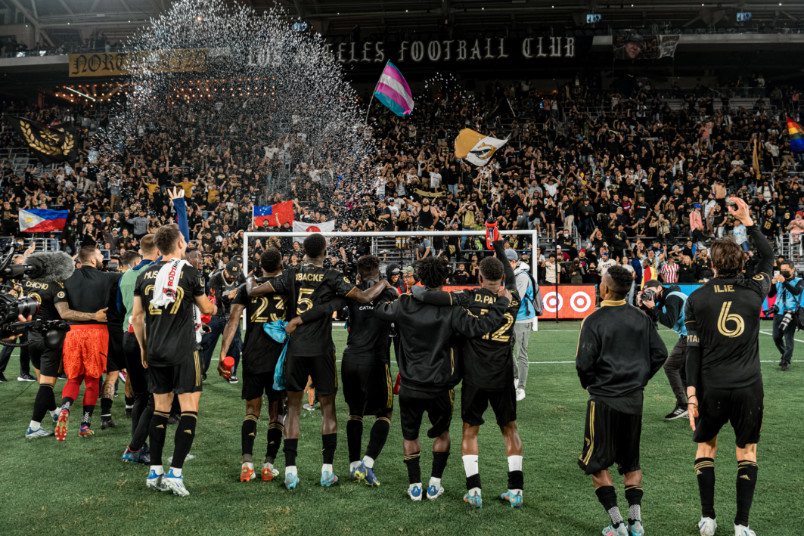 By Luis Bueno – RIVERSIDE, CA (May 4, 2022) US Soccer Players – LAFC lost a game in April to local rivals the LA Galaxy, but they’re still the clear-cut front runner in Major League Soccer. LAFC leads the league with 22 points, has scored the second-most goals, and has the second-best goal-differential in MLS. LAFC and Philadelphia, the 2nd-place team in the rankings, seem set to stick around near or at the top throughout the entire season.

Other teams that could close in on them, like NYCFC, Austin, and FC Dallas, face pivotal games this month. That will determine their position in these rankings and in the league table. But, more importantly, it will send a message to the rest of MLS, letting the league see what they’re up against.

The best team in MLS. LAFC isn’t solely relying on goals to overwhelm its opponents like the 2019 version, but this version is just as decisive in front of goal. We already know what that means, though it’s tough to fully discount that slip against the Galaxy. If LAFC feels they have something to prove, hosting the Union on Saturday gives them an ideal situation.

The Eastern Conference leaders started April with a pair of shutout wins but have just two points from their last three matches. The draw at Nashville was solid, though, given the hostile environment and big event feel of a stadium opener. The club visits LAFC next and will get a great read on where it stands.

In year two, this team has gone from the abyss of the Western Conference to a bona fide contender in a year-plus. Austin enters May with a four-match winning streak and conference opponents on the schedule. They play the Galaxy twice, RSL and LAFC.

Despite losing to Montreal, New York had a solid April, piling up wins against Eastern rivals New England, Orlando, and Chicago. Victories early in the season and against conference foes have helped the Red Bulls stay near the top of the Eastern table.

It’s our first big jump in the rankings, though a 2-2 draw at Sporting Kansas City might take some gloss off of a strong month. How Dallas scored those goals is indicative of their form, particularly Alan Velasco’s freekick. With Velasco and Jesus Ferreira leading the attack, FC Dallas isn’t going anywhere.

NYCFC found the switch to activate its offense. NYCFC had a 6-0 rout of RSL, survived an epic 5-4 contest over Toronto FC, and had a nice and tidy 3-0 win over San Jose. That means in the last three games, NYCFC has scored more goals (14) than 20 teams have this entire season.

NYCFC embarrassed RSL with that 6-0 win on April 17, but the club has not allowed a goal since. Real Salt Lake shut out the LA Galaxy in its latest win. That awful scoreline may have been a bit of a one-off outing instead of a symptom of greater ills.

After strong wins against Portland and LAFC to start the month, the Galaxy’s offense has gone quiet, with just one goal in three games since. Their sluggish attack gets no chance of a respite as it plays a tricky slate in May that includes two games against Austin and a trip to Minnesota.

It was just one win, but shutting out Portland 2-0 at home might be telling us more about the Rapids. That snapped a five-game winless streak and, more importantly. they looked rather dominant in the process. The addition of Gyasi Zardes may end up being a boost that pushes Colorado.

CF Montreal came from out of nowhere to post a 4-0-1 record last month, including a 2-1 win at New York. Montreal moved into 4th-place as it got some separation from the pack in the East. Only NYCFC has scored more goals than Montreal.

Minnesota had scored six goals in two games and was probably feeling good about itself. Those good feelings continued through halftime of their last match against LAFC. Minnesota could not keep up with LAFC and lost 2-0. Still, the club turned a corner after losing to Seattle and Austin to start off the month.

Orlando suffered through a 4-2 loss to LAFC and a 3-0 loss to New York. Still, the club picked up nine points last month and is still in 3rd-place in the Eastern Conference. Orlando does not seem as strong as they were this time last season, but it’s hard to argue with the table.

April was a rough month for the Crew, shut out in four consecutive matches. A 3-0 rout of lowly DC might not seem impressive, but it’s the kick start the club needed before a tricky slate of games this month.

Concacaf Champions League finalists on the brink of history will get back to focusing on the league table soon enough. That’s a good thing, considering the club is three spots from the bottom of the Western Conference.

Texas has seen a resurgence in MLS with its three clubs doing quite well this season. Houston lost at FC Dallas and home to Austin FC, suggesting an order that doesn’t flatter the Dynamo. Still, there’s plenty of room for all of them in the top-half of the Western Conference table.

Nashville finished its run of eight consecutive road games with a solid 3-3-2 record. Their home opener at GEODIS Park got them a point against the Union. Three of the next four matches will be at home, giving Nashville the chance to get back up to within a playoff spot.

The Revs showed signs of life in a solid 2-0 win over Inter Miami on the weekend. That brought their win total in April to two. Matt Turner back in goal is an obvious plus, but what’s causing the problems in New England is more about the offense. Coach Bruce Arena’s postgame assessments are always entertaining, but he has a point. This is a team that could be in a much better position based on the same performances.

Winless in April and scoring just once in five games, the questions are getting louder for this version of the Fire. Offseason signing Jairo Torres might make his Chicago debut this weekend and is the type of player who could begin to immediately answer some of them.

The club was already searching for consistency when disaster struck. Goalkeeper Brad Guzan tore his Achilles tendon and is out for the season. Scoring goals was more of a concern (11 goals in 11 games) but now the club faces challenges on both ends of the field.

Inter Miami lost at New England, but the club is in form and showing well. Their three-game winning streak going into that game against the Revs wasn’t easy. The club is still technically in 12th-place but, at 10 points, is even with four other teams and within three points of another four teams in a wide-open Eastern race.

When Bob Bradley took over at Toronto FC, he had a large project to oversee. Part of that process was to rebuild the defense, and that hasn’t quite happened yet. Toronto FC has not had a shutout this season and has allowed the second-most goals in the league. Somehow, the club still sits in 8th-place in the Eastern Conference despite having a lot of room left for improvement.

Sporting KC suffered through a terrible April, losing its first three matches before finishing the month off with two draws. The latest, a come-from-behind 2-2 tie against FC Dallas, might give the team a spark. Then again, visiting NYCFC might be another cold splash of reality.

FC Cincinnati held a halftime lead over LAFC on April 24, only to lose 2-1. But they came right back and beat Toronto FC 2-1 next time out. FC Cincinnati still has a ways to go, but they’re showing an ability to stay in games. That’s a noticeable change this season.

Portland hasn’t scored in three consecutive matches and the club’s lone win last month was against Vancouver. The reigning Western Conference champion has fallen off badly from its 2021 form.

Ten points from ten games is a decent haul from expansion Charlotte, but the team needs help on the attack. Charlotte scored five goals in its last two games of March but has just four goals in the other eight games this season. They scored just two goals in the five games last month. With three consecutive home games coming up, there’s an opportunity for this team to figure a few things out.

DC got an interim coach bounce, beating New England 3-2. They followed that up by losing 3-0 to Columbus. DC is in last place on nine points, but there’s time for adjustments to take hold.

The other club to make a coaching change is still mired near the bottom of the table. The Quakes did have a nice 4-3 win over Seattle to show for its efforts last month. They were no match for NYCFC last time out, an indication of the amount of work necessary.

Vancouver has played eight matches this season with only Seattle playing less due to Champions League obligations. What’s stalling the Whitecaps is their 0.5 points per game average, the lowest in the league. An April win over Sporting KC was nice, but the club looked hopeless in the other three games last month.