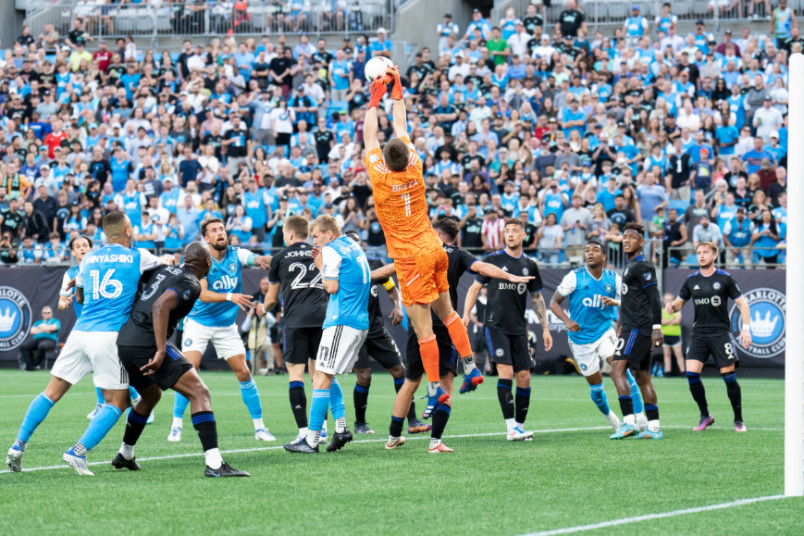 Colorado shutout LAFC 2-0 at home. Gyasi Zardes opened the scoring from the penalty spot in the 17th and Diego Rubio converted a penalty in the 28th minute. Rapids goalkeeper William Yarbrough made two saves.

“The amount of adversity we’ve had to deal with this week, extremely, extremely challenging circumstances,” Colorado Robin Fraser said. “I mean, we were playing 48 hours ago. That’s unprecedented. I said to the team, I love being tested. Because then you really see the character of the group. And we were on the front foot from the beginning of the game.”

Montreal won 2-0 on the road in Charlotte. Djordje Mihailovic scored for Montreal in the 45th and Alistair Johnson doubled the lead in the 67th minute. Montreal goalkeeper Sevastian Breza made four saves to keep the clean sheet.

NYCFC shutout Columbus 2-0 at Yankee Stadium. Talles Magno scored in the 9th and Valentin Castellanos made it 2-0 in the 57th. NYCFC goalkeeper Sean Johnson didn’t have to make a save to keep the clean sheet.

Vancouver and San Jose finished 3-3 at BC Place. Lucas Cavallini put the Whitecaps up in the 52nd with San Jose’s Jamiro Monteiro equalizing in the 62nd. The Earthquakes took the lead from a Jeremy Ebobisse goal in the 73rd. Ryan Raposo equalized for Vancouver in the 75th. Ebobisse scored again in the 81st with the Whitecaps’ Erik Godoy equalizing in the 90th minute.

Philadelphia and the Red Bulls finished 1-1 in Chester. Daniel Gazdag put the Union up in the 47th with New York going a man down in the 55th with a red card to Dylan Neilis. Luquinhas equalized for the Red Bulls in the 66th minute.

FC Cincinnati beat Chicago 2-1 at Soldier Field. Cincinnati went up from a 33rd minute own-goal. The Fire’s John Duran equalized in the 83rd with Luciano Acosta scoring for Cincinnati in the 85th minute.

“I’m certainly very pleased with the result,” Cincinnati coach Pat Noonan said. “I was really pleased with what these guys did on the defensive side of the ball. We did not make it easy on ourselves with just being cleaner in moments to get us moving forward, we missed out on some easy passes. And that would have really allowed us to push the numbers forward. But we couldn’t get those moments right, and credit to Chicago. Chicago was better with the ball, and they were throwing a lot at us. I can’t say enough about the group as far as how we defended the box, how we defended set pieces.”

Inter Miami and DC United drew 2-2 in Fort Lauderdale. Leonardo Campana scored for Inter in the 31st and Damion Lowe doubled the lead in the 45th. DC’s Taxiarchris Fountas pulled a goal back in first-half stoppage time with Ola Kamara equalizing in the 74th. DC went a man down with a red card to Christopher Durkin a minute into stoppage time.

Houston shutout Nashvillle 2-0 at home. Adalberto Carrasquilla scored for the Dynamo in the 16th. Houston went a man down in the 35th with a red card to Adam Lundqvist in the 35th. Darwin Quintero converted a Dynamo penalty in the 53rd. Houston goalkeeper Steve Clark made two saves to keep the clean sheet.

“Amazing,” Houston coach Paulo Nagamura said. “It was a great team performance to play the way that they did with a man down for most of the game. It was a very gutsy performance. That’s what I said to the guys in the locker room. It was a performance of warriors and very pleased. Very, very pleased with the performance of the team in general.”

Real Salt Lake came back to beat Austin 2-1 at home. Alexander Ring scored for Austin in the 24th, going a man down with a red card to Daniel Gil in the 47th. Maikel Chang equalized for Salt Lake in the 55th and Andrew Brody scored in the 88th minute.

Portland beat Sporting Kansas City 7-2 at Providence Park. Bill Tuiloma put Portland up in the 12th with Sebastian Blanco scoring in the 46th and 52nd and Nathan Fogaca adding a goal in the 56th. . Sporting’s Johnny Russell pulled a goal back in the 57th. Fogaca scored again in the 69th. Portland went a man down with a red card to Jose Van Rankin in the 74th. Sporting’s Marinos Tzionis scored in the 75th and Robert Voloder saw red in the 78th. Marvin Loria scored for the Timbers in the 88th and Santiago Moreno got a goal two minutes into stoppage time.

FC Dallas beat the LA Galaxy 2-1 on the road. Jesus Ferreira opened the scoring for Dallas in the 11th and Paul Arriola made it 2-0 in the 20th. Ferreria scored again in the 23rd. LA’s Douglas Costa pulled a goal back in the 67th minute.

Atlanta and New England drew 2-2 at Mercedes-Benz Stadium. Thiago Almada put Atlanta up in the 15th. New England’s Adam Buksa equalized in the 30th and scored again in the 55th. Luiz Araujo equalized for Atlanta in the 63rd.

“Yes and let’s be fair, not our best day,” New England coach Bruce Arena said when asked if things were improving recently. “We made some mistakes, obviously, in the game and probably could have done a little better job of protecting the lead in the second half. But the one thing that was a positive at the end of the game, we at least closed the game out and didn’t concede a goal like we’ve done in a number of games this year, so that side of it is positive.”

Seattle came back to beat Minnesota 3-1 at home. Robin Lod put United up in the 34th. Seattle converted a 50th minute penalty and Cristian Roldan scored in the 74th. Nicolas Lodeiro scored for the Sounders four minutes into stoppage time.