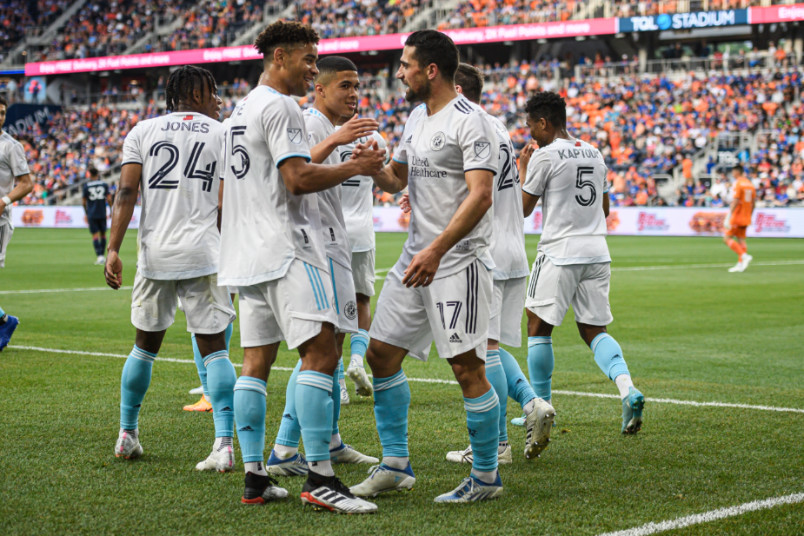 The roundup of week 13 of the 2022 Major League Soccer season starts with LAFC shutting out Columbus 2-0 on the road in a game with lengthy weather delays. Carlos Vela put LA up in the 62nd and Jose Cifuentes made it 2-0 in the 73rd. Maxime Crepeau made three saves to keep the clean sheet.

DC and Toronto drew 2-2 at Audi Field. Edison Flores put United up in the 7th with Ayo Akinola equalizing for Toronto in the 36th. Michael Estrada returned DC’s lead in the 56th with Jonathan Osorio equalizing in the 89th.

“Listen, games on the road are hard,” Revs coach Bruce Arena said. “We got a break tonight. We haven’t had a break all year, basically. And tonight we got a break getting a call at the end of the game. But, we scored in the last, I don’t know how many road games, we score at least two goals a game. Tonight we had three. So, we’re in position to win games.”

Nashville and Atlanta drew 2-2 at GEODIS Park in a game also delayed due to weather. CJ Sapong put Nashville up in the 24th with Atlanta’s Thiago Almada equalized in the 26th. Nashville’s Hany Mukhtar scored in the 31st with Dom Dwyer equalizing for Atlanta in the 88th minute.

“I think it certainly affects,” Atlanta coach Gonzalo Pineda said about the weather. “I can not tell you more us than them, I think it was the same. In that sense, it’s not an excuse for anything. I think it’s just part of the adversity that sometimes you have to face. The good part is that it was even, it was for both sides. It was certainly an issue, but I think it didn’t affect the result of the game.”

Inter Miami shutout the Red Bulls 2-0 in Fort Lauderdale. Ariel Lassiter opened the scoring in the 29th and Robert Taylor made it 2-0 in the 88th. Drake Callender made four saves to keep the clean sheet.

NYCFC shut out Chicago 1-0 at Citi Field. Heber converted a 23rd minute penalty with Sean Johnson making one save to keep the clean sheet.

“Well, I didn’t think this was one of our better performances this year,” Chicago coach Ezra Hendrickson said. “Normally, even in our losses, our previous losses, I thought, you know, we were in the game a bit. But I thought tonight, we just… we turned the ball over a lot and we were forced to defend a lot and that’s very difficult to do, and in these conditions, that type of hot weather, it becomes difficult for you. So I thought we suffered from that.”

Charlotte came back to beat Vancouver 2-1 at Bank of America Stadium. Tossaint Ricketts put the Whitecaps up in the 2nd minute with Andre Shinyashiki equalizing in the 8th. Daniel Rios scored Charlotte’s winner in the 85th minute.

San Jose and Sporting Kansas City drew 1-1 at PayPal Park. Johnny Russell scored for Sporting in the 45th and the Earthquakes’ Jackson Yueill equalized in the 46th.

Minnesota beat FC Dallas 2-1 away. Robin Lod put United up in the 20th and DJ Taylor made it 2-0 in the 55th. Dallas’s Paul Arriola pulled a goal back in the 59th.

Houston shut out the Galaxy 3-0 on the road. Sebastian Ferreira scored in the 11th and Tyler Pasher doubled the lead in the 58th. Thorleifur Ulfarsson scored LA’s third goal in the 62nd. Galaxy goalkeeper Jonathan Bond made eight saves to keep the clean sheet.

Week 13 ends at Providence Park with Philadelphia shutting out the Timbers 2-0. Daniel Gazdag put the Union up in the 5th with Sergio Santos doubling the lead in the 48th. Union goalkeeper Andre Blake made two saves to keep the clean sheet.