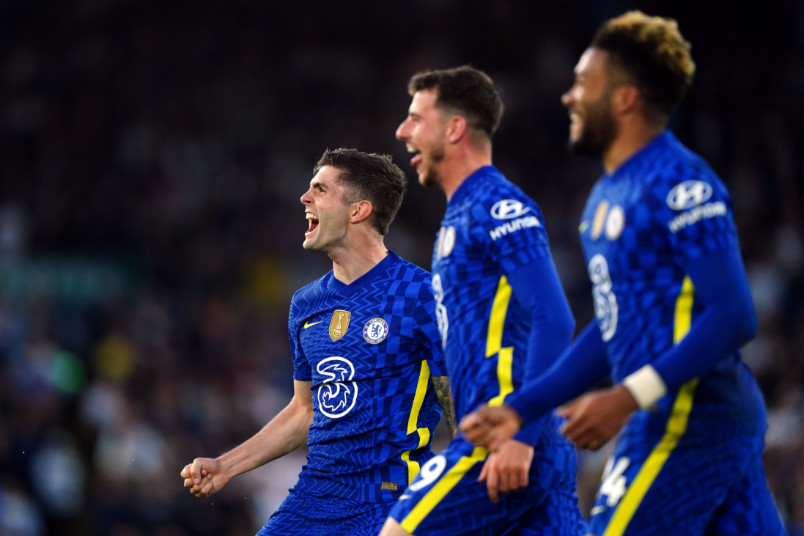 Thursday’s soccer news starts in the Premier League. Christian Pulisic scored for Chelsea in their 3-0 win at Leeds. Mason Mount opened the scoring for Chelsea in the 4th with Leeds seeing red in the 24th minute. Pulisic doubled the lead in the 55th and Romelu Lukaku finished off the goals in the 83rd. Pulisic subbed out in the 78th minute.

“I thought we started really well,” Pulisic said. “We came out with a lot of intensity and got a goal and then obviously the red card made it a bit easier. All around it was a good performance, but we still have some important games coming to focus on. We knew how they like to play as a team and we knew it was important, especially coming here with the atmosphere and everything, to start well and come out, and we showed that.”

Josh Sargent wasn’t in the squad for Norwich City’s 3-0 loss at Leicester City. The goals came in the 54th, 62nd, and 70th minutes. Zack Steffen was on the bench for Manchester City’s 5-1 win at Wolverhampton. Kevin De Bruyne scored for City in the 7th minute with Wolverhampton equalizing in the 11th. De Bruyne added goals in the 16th, 24th, and 60th with Raheem Sterling scoring in the 84th minute.

“It’s pretty overwhelming at the moment,” Celtic manager Ange Postecoglou said. “It’s been such an epic season for us, it started off a fair way back and to finish up on top is pretty special. I’m just really proud of the players and staff, and the way they’ve tackled very challenge this year. That’s 31 games without losing and we had to be unbelievably strong through that period to be where we are today, and I think we’re worthy champions.”

James Sands was on the bench for Rangers in their 4-1 home win over Ross County. Scott Wright put Rangers up in the 13th with James Tavernier converting a 29th minute penalty. Ross County pulled a goal back in the 72nd, but Rangers added goals from Fashion Sakala (82nd) and Amad Diallo (90th).

Weston McKennie wasn’t in the squad for Juventus’s 4-2 loss to Inter Milan in the Coppa Italia final. Falling behind in the 6th minute, Alex Sandro equalized for Juve in the 50th and Dusan Vlahovic put them ahead in the 52nd. Inter converted an 80th minute penalty with the game finishing 2-2 in regulation. Moving to extra time, Inter converted a 99th minute penalty and scored again in the 102nd.

Matt Miazga was on the bench for Alaves’s 2-1 home win over Espanyol in La Liga. Miguel De la Fuente put Alaves up in the 7th. Espanyol equalized from the penalty spot in the 14th and went a man down in the 46th. Gonzalo Escalante scored for Alaves in the 59th minute. Matthew Hoppe was on the bench for Mallorca’s 0-0 draw at Sevilla.

Cole Bassett subbed on at halftime for Feyenoord’s 1-0 win at Go Ahead Eagles in the Eredivisie. Bryan Linssen scored in the 71st minute. Richy Ledezma subbed on in the 88th for PSV’s 3-2 home win over NEC Nijmegen. Ritsu Doan scored for PSV in the 26th, Erick Gutierrez doubled the lead in the 36th, and Eran Zahavi scored in the 61st. NEC pulled a goal back in the 66th and converted a 72nd minute penalty. Luca de la Torre’s Heracles lost 2-0 at Waalwijk to goals in the 20th and 59th minutes.

In Belgium, Owen Otasowie wasn’t in the squad for Club Brugge’s 1-0 home win over Union Saint-Gilloise. Playing a man up from the 59th, a 65th minute own-goal was the difference. Club Brugge finished a man down with a red card to Tajon Buchanan in stoppage time.

Moving to the US Open Cup round of 32, Charlotte won 5-1 at Richmond. Daniel Rios put Charlotte up in the 34th with Richmond equalizing in the 53rd. Yordy Reyna had Charlotte in the lead again in the 54th and McKenzie Gaines added goals in the 58th and 61st minutes. Andre Shinyashiki finished off the Charlotte goals in the 86th.

New England came back to beat FC Cincinnati 5-1 at home. Alvaro Barreal put Cincinnati up in the 12th minute. New England’s Carlos Gil converted a 34th minute penalty, scoring again in the 37th. Adam Buksa made it 3-1 in the 47th with Gill finishing his hat-trick in the 53rd. Buksa scored again in the 57th minute.

NYCFC knocked out Rochester 3-1 at Belson Stadium in Queens. Thiago scored for NYCFC in the 23rd with Heber making it 2-0 in the 31st. Rochester pulled a goal back in first-half stoppage time. NYCFC’s Maxime Chanot scored in the 76th minute. Both teams saw red in stoppage time, with Gabriel Pereira exiting for NYCFC.

Nashville came back to beat Atlanta 3-2 at home in extra time. United took a 2-0 lead through Thiago Almada in the 13th and Luis Araujo in the 29th. Nashville responded with a Hany Mukhtar penalty in the 50th and CJ Sapong’s equalizer two minutes into stoppage time. With the game in extra time, Nashville’s Ethan Zubak scored in the 93rd minute.

Seattle and San Jose finished 2-2 in regulation with the Earthquakes advancing 10-9 on penalties. Jack Skahen converted a 10th minute penalty for San Jose and Cade Cowell doubled the lead in the 50th. Seattle came back through goals from Jimmy Medranda (54th) and Fredy Montero (77th) to send the game to extra time. San Jose failed to convert in the second round of penalties and Seattle didn’t score in the third round. Seattle failed to convert in the 11th round.

MLSsoccer’s Ari Liljenwall talks to new Chicago Fire signing Chris Mueller about his time at Hibernian. The Ringer’s Musa Okwonga with what Erling Haaland will mean for Manchester City. Inside World Football’s Andrew Warshaw on FIFA investigating Ecuador over a player eligibility issue.