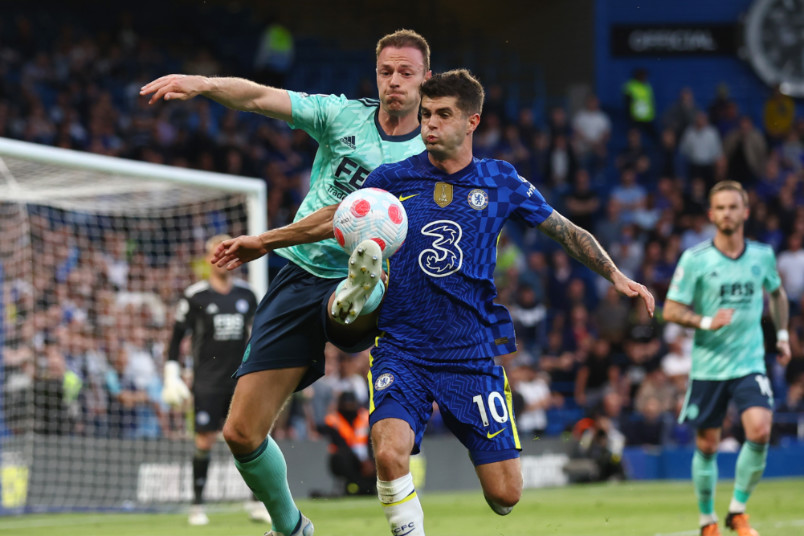 Friday’s soccer news starts with Christian Pulisic’s Chelsea drawing 1-1 at home with Leicester City. Down a goal from the 6th minute, Chelsea’s Marcos Alonso equalized in the 35th. Pulisic subbed out in the 72nd minute. Chelsea hosts Watford on the final matchday of the 2021-22 Premier League season on Sunday knowing they will finish in 3rd-place.

“It’s the story of the season,” Chelsea manager Thomas Tuchel said. “We need an assist from a wing-back and a goal from a wing-back. You can see the numbers of our offensive players and you can see the numbers from the teams in front of us. Still today was the day we secured third place, we have been all season in the top three and we have in mind where we come from. We had some obstacles to overcome and some circumstances around the club which was not easy so full credit to the team.”

Zack Steffen’s Manchester City enters the final matchday a point ahead of Liverpool. City hosts 14th-place Aston Villa while 2nd-place Liverpool is at home to 8th-place Wolverhampton who can finish no higher.

“We cannot control it, it’s just a football game” Manchester City manager Pep Guardiola said. Don’t think about the consequences of if we win or not. Think about what we have to do to beat Aston Villa. Are they going to play with Ings and Watkins or just with Watkins? Play with a holding midfielder or not? Digne on the outside or inside? This is what we have to handle. We have to be anxious? No, go there to try to enjoy the moment. If we are struggling, let’s go again and try to enjoy it. From my experience, that’s the best way to approach this situation.”

Also in the soccer news, Gio Reyna will have a new coach next season after Borussia Dortmund “parted company” with Marco Rose. “Despite a difficult season with many uncertainties, I was convinced by our path,” Rose said in the press statement announcing the move. “During our discussion, I developed the impression there was no longer a one hundred percent conviction among all those responsible. We therefore ultimately decided together to end the cooperation.”

Saturday has the Super Lig on beIN Sport: Yeni Malatyaspor vs Fenerbahce at 12pm. DFB Pokal on ESPN Deportes: Freiburg vs RB Leipzig at 2pm.Ligue 1 on beIN Sport: PSG vs Metz at 3pm.

Sunday has the final day of the Premier League season on NBC: Manchester City vs Aston Villa at 11am. USA has Liverpool vs Wolverhampton at 11am. Arsenal vs Everton is on CNBC at 11am. Golf Channel for Burnely vs Newcastle at 11am. Norwich City vs Spurs is on Syfy at 11am.

Super Lig on beIN Sport: Basaksehir vs Trabzonspor at 9am. Serie A on CBS Sports: Inter Milan vs Sampdoria and Sassuolo vs AC Milan at 12pm. La Liga on ESPN Deportes: Osasuna vs Mallorca at 2pm.

Liga MX on Univision: Pachuca vs Club America at 9pm. MLS on FS1: Portland vs Philadelphia at 10pm.

No games on Monday’s schedule.