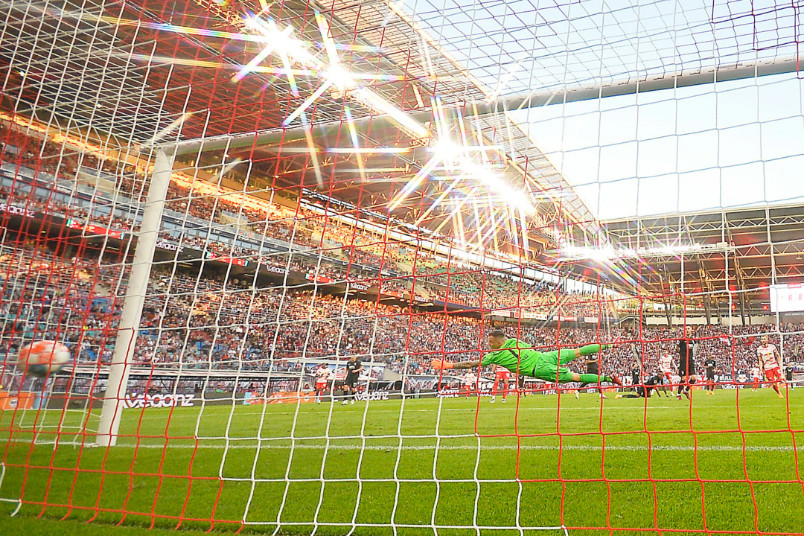 The roundup of USMNT players in Europe and Brazil starts in the Bundesliga. Tyler Adams subbed on in the 71st minute of RB Leipzig’s 4-0 home shutout of Augsburg. Ricardo Pepi subbed on for Augsburg in the 58th minute. Leipzig’s Andre Silva opened the scoring in the 40th with Christopher Nkunku adding goals in the 48th and 57th. Emil Forsberg converted a 64th minute Leipzig penalty.

“It’s not every day that you lose a European cup semifinal,” RB Leipzig coach Domenico Tedesco said. “We had to swallow that. To deliver such a performance three days later makes me relieved and happy for the team. It was not an easy game. The start was a bit rough. That makes the way we found our way into the game more impressive.”

John Brooks’s Wolfsburg shutout Cologne 1-0 away. Yannick Gerhardt scored in the 43rd minute. Timmy Chandler’s Eintracht drew 1-1 at home with Gladbach. Falling behind in the 4th minute, Eintracht’s Goncalo Paciencia equalized in the 65th. Julian Green subbed out in the 71st minute of Furth’s 3-1 home loss to Borussia Dortmund. Julian Brandt put Dortmund up in the 26th with Furth’s Jessic Ngankam equalizing in the 70th. Brandt put Dortmund up for good in the 72nd and Felix Passlack scored in the 77th minute.

George Bello subbed on in the 77th for Arminia Bielefeld’s 2-1 loss at BfL Bochum. Down a goal from the 21st, Arminia’s Joakim Nilsson equalized in the 35th. Bello was credited with the 89th minute own-goal that sent the three points Bochum’s way. Andrew Wooten subbed on in the 76th minute of Osnabruck’s 1-0 win at Havelse in the 3.Liga. Lukas Gugganig scored in the 82nd minute. Terrence Boyd saw yellow in the 55th and subbed out in the 65th for Kaiserslautern in their 2-0 loss at Viktoria Koln. The goals came in the 26th and 38th minutes.

Christian Pulisic’s Chelsea drew 2-2 at home with Wolverhampton in the Premier League. Romelu Lukaku converted a 56th minute Chelsea penalty and doubled the lead two minutes later. Wolverhampton pulled a goal back in the 79th and equalized seven minutes into stoppage time.

“I was very happy with the way we started the second-half,” Chelsea manager Thomas Tuchel said. “We created chances and enough situations to be in front but we were 2-0 up and then we took too much risk. We invited the counter-attacks and big chances. Once you do this you lose confidence and invite the opponent to smell that something is possible when it is unnecessary.”

Tim Ream and Antonee Robinson’s Fulham lost 4-0 at Sheffield United in the Championship. The goals came in the 10th, 21st, 25th, and 49th minutes. Duane Holmes’s Huddersfield Town shutout Bristol City 2-0 at home. Harry Toffolo scored in the 33rd and Danny Ward doubled the lead in the 44th minute.

Cameron Carter-Vickers’s Celtic beat Hearts 4-1 at home in the Premiership. Hearts scored in the 3rd minute with Daizen Maeda equalizing for Celtic in the 30th. Kyogo Furuhashi put Celtic up for good in the 37th with Matt O’Riley (69th) and Giorgos Giakoumakis (90th) adding goals. James Sands’s Rangers shutout Dundee 2-0 at home. James Tavernier converted a Rangers penalty in the 55th and Amad Diallo scored in the 78th.

Tim Weah’s Lille lost 2-1 at home to Monaco in Ligue 1. Falling behind in the 42nd, Angel Gomes equalized for Lille in the 69th. Monaco scored again in the 75th minute. Erik Palmer-Brown’s Troyes drew 2-2 at PSG. Trailing from a goal in the 6th and a 25th minute penalty, Ike Ugbo scored for Troyes in the 30th. Florian Tardieu converted a Troyes penalty in the 49th minute. Nicholas Gioacchini subbed on in the 86th minute of Montpellier’s 2-1 loss at Clermont Foot. Down from a 4th minute goal, Montpellier’s Joris Chotard equalized in the 32nd. Clermont Foot converted a 69th minute penalty.

Luca De la Torre’s Heracles lost 2-0 at Willem II in the Eredivisie. Giving up goals in the 15th and 17th, Heracles went a man down in stoppage time with a red card to Sven Sonnenborg. Mark McKenzie’s KRC Genk drew 2-2 at Charleroi in Belgium. Trailing from the 45th, Paul Onuachu equalized for Genk in the 80th and Kristian Thorstvedt put them up in the 84th. Charleroi equalized in stoppage time. Sam Vines’s Royal Antwerp lost 4-0 at home to Anderlecht.

Reggie Cannon’s Boavista drew 1-1 at home with Vitoria in the Primeira Liga. Down a goal from the 25th, Boavista’s Paul-Georges-Ntep equalized in the 70th. Boavista played a man up from the 77th minute. Jordan Pefok subbed out in the 34th minute of Young Boys’ 3-1 loss at Lugano in the Swiss Super League. Mohamed Ali Camara scored for Young Boys in the 46th. Lugano scored in the 49th and 70th, going a man down in the 88th. They added a third goal in stoppage time.

Brenden Aaronson subbed on at halftime of Red Bull Salzburg’s 4-0 home win over Wolfsberg in the Austrian Bundesliga. Karim Adeyemi scored for Red Bull in the 2nd with Chukwubuike Adamu doubling the lead in the 31st. Adeyemi scored again in the 37th. Playing a man up from the 40th, Oumar Solet added Salzburg’s fourth goal in the 84th minute. Ulysses Llanez subbed out at halftime of St Polten’s 3-0 loss at Austria Lustenau in the Erste Liga. The goals came in the 9th, 23rd, and 29th minutes.