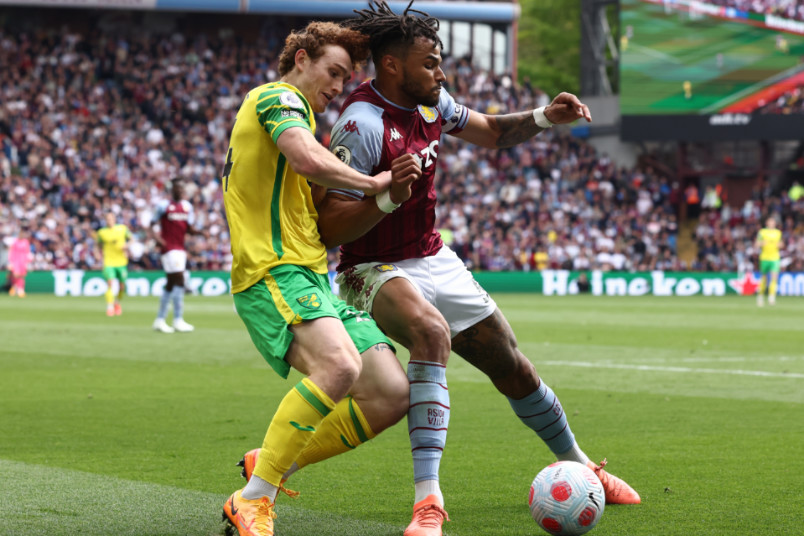 The roundup of USMNT players in Europe and Brazil starts in the Premier League. Josh Sargent subbed on in the 67th and exited in the 81st with an injury in Norwich City’s 2-0 loss at Aston Villa. Norwich fell behind in the 41st and Villa scored again three minutes into stoppage time. The result officially drops Norwich to the Championship next season.

“It was always going to be a bit of a punt with Josh but we felt we might need his physicality late on in the game and he just re-aggravated his injury,” Norwich head coach Dean Smith said. “It’s nothing too serious. Pierre got caught as well so we wanted to get some fresh legs on for him.

Christian Pulisic’s Chelsea lost 1-0 at Everton to a 46th minute goal. Duane Holmes subbed out in the 65th minute of Huddersfield Town’s 2-1 win at Coventry City in the Championship. Harry Toffolo put Huddersfield up in the 45th and Tino Anjorin converted a penalty in the 79th. Coventry pulled a goal back in the 90th. Lynden Gooch’s Sunderland won 1-0 at Morecambe in League One. Nathan Broadhead scored in the 10th minute.

Cameron Carter-Vickers’s Celtic drew 1-1 with Rangers at home in the Scottish Premiership. Jota put Celtic up in the 21st with Rangers’ Fashion Sakala equalizing in the 67th. Christian Ramirez’s Aberdeen won 1-0 at home over Dundee. Lewis Ferguson converted a 73rd minute penalty. Sebastian Soto subbed on in stoppage time for Livingston’s 1-0 home win over Hibernian.

In the Austrian Cup final, Brenden Aaronson subbed on in the 63rd minute of Red Bull Salzburg’s 3-0 shutout of Ried at Worthersee Stadion. Luka Sucic scored in the 27th and Maximilian Wober doubled the lead in the 52nd. Benjamin Sesko finished off the goals in the 87th.

“I really felt pressure for the first time today,” Red Bull coach Matthias Jaissle said. “We have worked our way to that in the past months and years too. The roles were clearly defined, and we are hugely relieved. Compliments to Ried, as they did really, really well right until the end.”

Moving to Austria’s second division, Ulysses Llanez scored in St Polten’s 4-1 home win over Kapfenberger. Falling behind to a 12th minute penalty, Dognimani Silue equalized for St Polten in the 18th with Thomas Salamon scoring in the 41st. Llanez made it 3-1 in the 54th. Playing a man up from the 68th, Kresimir Kovacevic scored St Polten’s fourth goal in the 84th. Llanez saw yellow in stoppage time.

Julian Green subbed on in the 73rd minute of Furth’s 1-1 draw at Union Berlin in the Bundesliga. Branimir Hrgota scored for Furth in the 33rd and Union Berlin equalized in the 72nd. George Bello subbed on in the 72nd minute of Arminia Bielefeld’s 1-1 home draw with Hertha Berlin. Trailing from the 54th, Arminia’s Joakim Nilsson equalized a minute into stoppage time. Terrence Boyd’s Kaiserslautern lost 3-1 at home to Borussia Dortmund II in the 3.Liga. Down 3-0 from goals in the 32nd, 59th, and 81st, Felix Gotze scored for Kaiserslautern three minutes into stoppage time.

Andrija Novakovich subbed out in the 75th minute of Frosinone’s 3-0 loss at SPAL in Serie B. SPAL scored in the 8th and 12th, going a man up in the 67th with a red card to Frosinone’s Przemyslaw Szyminski. SPAL scored again in the 88th minute.

Yunus Musah subbed on in stoppage time for Valencia’s 1-1 home draw with Levante in La Liga. Hugo Duro scored for Valencia in the 27th, going a man down with a red card to Jose Gaya in the 31st. Levante equalized in the 81st. Matthew Hoppe subbed on in the 89th minute of Real Mallorca’s 2-1 loss at Barcelona. Memphis Depay put Barca up in the 25th and Sergio Busquets doubled the lead in the 54th. Mallorca’s Antonio Raillo scored in the 79th minute. Shaq Moore subbed on in the 87th minute of Tenerife’s 2-0 loss at Lugo on the Segunda Division. Mario Gonzalez scored in the 64th and Andres Martin doubled Tenerife’s lead in the 78th minute.

Erik Palmer-Brown’s Troyes shutout Lille 3-0 at home in Ligue 1. Troyes opened the scoring from a Florian Tardieu penalty in the 43rd, going a man up from a Renato Sanches red card in the 50th. Ike Ugbo converted another Troyes penalty in the 55th, with Lille going two men down following a red card to Burak Yilmaz. Tardieu converted his second penalty of the game in the 86th minute. Nicholas Gioacchini subbed on in the 86th minute of Montpellier’s 2-2 home draw with Metz. Trailing from goals in the 24th and 70th, Arnaud Souquet scored for Montpellier in the 80th and Elye Wahi equalized a minute into stoppage time.

Luca De la Torre subbed out in the 78th minute for Heracles in their 1-1 home draw with Twente in the Eredivisie. Heracles went a man down following a 16th minute red card to Anas Ouahim. Noah Fadiga put Heracles up in the 36th with Twente equalizing in first-half stoppage time.

Mark McKenzie’s KRC Genk won 4-2 at Mechelen in the Belgian Pro League. Daniel Munoz put Genk up in the 31st. Mechelen equalized in the 60th. Genk’s Theo Bongonda scored in the 80th with Mechelen equalizing again in the 84th. Bongonda returned Genk’s lead in the 87th and Joseph Paintsil scored four minutes into stoppage time. Sam Vines subbed out in the 71st minute of Royal Antwerp’s 0-0 home draw with Union Saint-Gilloise.

Reggie Cannon’s Boavista won 2-1 at Moreirense in the Primeira Liga. Kenji Gorre scored for Boavista in the 20th. Moreirense equalized in the 88th with Boavista’s Petar Musa scoring a minute later. Moreirense went a man down in stoppage time with Boavista’s Musa and Sebastian Perez also seeing red.

Jordan Pefok scored in Young Boys’ 2-1 win at Sion in the Swiss Super League. Vincent Sierro put Young Boys up in the 65th with Sion equalizing in the 79th. Pefok converted a penalty seven minutes into stoppage time. Tyler Boyd subbed on in the 63rd minute of Rizespor’s 7-1 win at Goztepe. Falling behind in the 7th minute, Rizepor equalized from an own-goal in the 16th. Papiss Cisse put Rizespor up for good in the 19th with Gedson Fernandes scoring in the 34th and 54rd. Yusuf Sari (68th), Joel Pohjanpalo (78th), and Ronaldo Mendes (88th) added goals.