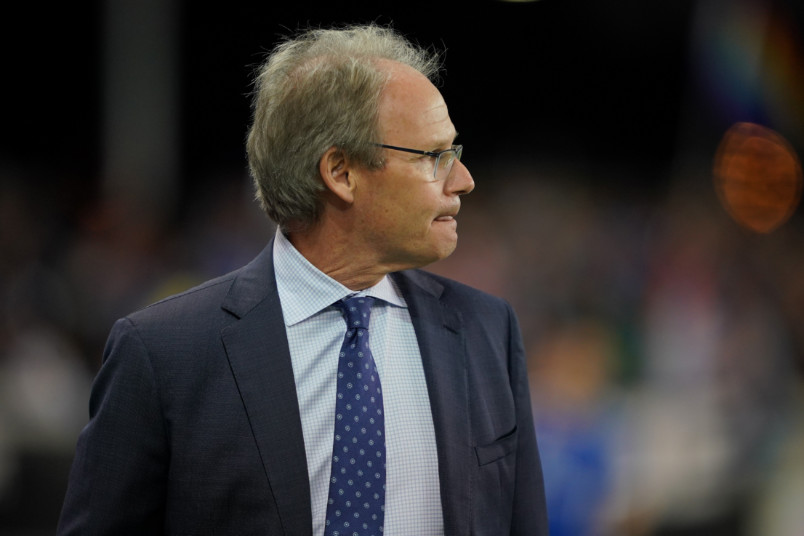 By Clemente Lisi – NEW YORK, NY (May 9, 2022) US Soccer Players – Seattle Sounders coach Brian Schmetzer is so successful in part because he truly worries about the little things. Whether it’s scribbling notes on a pad during games or watching hours of videotape in between matches, Schmetzer is always concerned about what comes next. The Sounders made history last Wednesday night by defeating Pumas UNAM to become the first MLS team to capture the Concacaf Champions League since the tournament format changed in 2008. With the trophy secured and confetti cleaned up, Seattle had little time to regroup.

“Give me six months,” Schmetzer told reporters after the game. “Let me get past Dallas, get past the Open Cup game at Starfire, which is going to be a big deal. Let me get through some of those games and maybe I can reflect a little bit more.”

Schmetzer was referring to this past Saturday night’s MLS regular season game against FC Dallas at Toyota Park and their upcoming US Open Cup round of 32 game against the San Jose Earthquakes this Wednesday at Starfire Soccer Stadium, just outside Seattle. Once again using a highly rotated squad, Schmetzer’s men lost 2-0 to FC Dallas, pushing Seattle even further down the Western Conference standings. Key starters such as goalkeeper Stefan Frei and striker Jordan Morris stayed in Seattle to get some rest.

The historic Champions League run has come at a cost. Seattle had to play games just days apart, trying to manage minutes and rest players in-between midweek CCL games and weekend MLS matches. The next stop for Seattle is representing the region at the FIFA Club World Cup. But the real next stop will be trying to be competitive again in MLS after slumping to a 2-5-1 record to start the season. The defeat to Dallas marked Seattle’s third consecutive MLS loss.

Seattle general manager Garth Lagerwey had made winning the CCL a priority. In a message to fans last month posted to the team’s official website, Lagerwey called the CCL final “the biggest game in club history. “This game on May 4 is for immortality,” he said. “This game is for the whole city of Seattle, the whole community.”

The Sounders pulled no punches. Local sports legends like baseball legend Ken Griffey, Jr. and NFL star Marshawn Lynch did promos for the game, an effort that helped build excitement for the final and helped the team draw a record-breaking crowd of 68,741 fans at Lumen Field. It’s a bargain MLS teams have been willing to make if they want to win the CCL, a move that paid off for Seattle when so many other MLS sides had failed in the past. The euphoria that comes with winning a big trophy has to certainly work as motivation for Schmetzer and his players heading into the summer.

It’s the type of risk-reward proposition that Seattle as a club has thrived on since joining MLS in 2009. The team won the US Open Cup in its expansion year, winning the championship again in 2010 and ’11. Seattle added a fourth US Open Cup to its trophy case in 2014 before winning two MLS Cups in 2016 and ’19.

Recent history, however, may serve as a guide for what Seattle does this season. In 2020, LAFC lost the CCL final to UANL and finished seventh in MLS that season. LAFC made the playoffs that season, eliminated in the first round by Seattle. Two years earlier, Toronto FC lost the CCL final to Chivas. They would finish ninth in MLS that season, failing to make the postseason. During the 2014-15 CCL season, the Montreal Impact lost the final to Club America, but the Canadian representative finished third in the Eastern Conference during the 2015 season. They would get as far as the conference semifinals, where they were eliminated by Columbus.

There’s still plenty of time for Seattle to course correct. Schmetzer is known for figuring such things out. Winning the Concacaf Champions League was historic. Failing to make the MLS Cup Playoffs would be catastrophic. Seattle isn’t known to back down from a challenge. The next few weeks will set the tone for how the Sounders do in MLS this season. The time for rotating squads is over. It’s time for the real Sounders to show up in MLS.