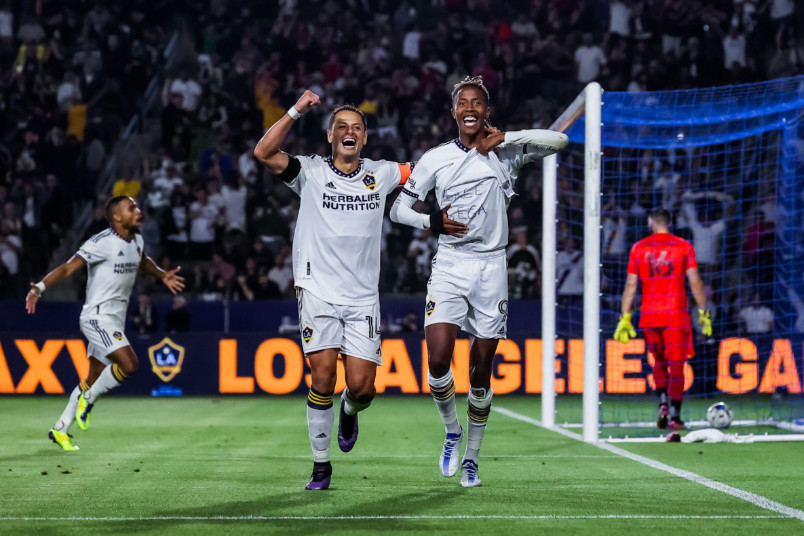 The soccer news starts in the round of 16 in the US Open Cup. Nashville came back to beat Louisville City 2-1 on the road. Falling behind in the 37th minute, Ake Arnaud Loba equalized in the 39th and Hany Maukhtar scored Nashville’s winner in the 89th minute.

Orlando City and Inter Miami finished 0-0 in regulation and drew 1-1 in extra time. Orlando advanced 4-2 on penalties. Jean Mota scored for Inter in the 94th and Orlando’s Facundo Torres equalized in the 97th minute. Inter Miami had a penalty saved in the second round and failed to convert in the third.

NYCFC shutout New England 1-0 at Belson Stadium after finishing scoreless in regulation. Santiago Rodriguez scored the game’s only goal in the 94th minute.

“I thought our team played a real hard game and it was a very competitive game,” New England coach Bruce Arena said. “After 90 minutes, their chances were as good as ours, and obviously we made a mistake turning the ball over that created their goal, but I thought the effort by our guys tonight was outstanding.”

The New York Red Bulls beat Charlotte FC 3-1 at MSU Soccer Park. Patryk Klimala scored for New York in the 2nd minute with Daniel Rios equalizing in the 8th. Dylan Nealis put the Red Bulls up for good in the 63rd with Tom Barlow scoring two minutes into stoppage time.

“Not the result that we wanted,” Dynamo coach Paulo Nagamura said. In the first-half, we were really, really good. Good pressing on Sporting KC, we controlled the game pretty well, having a lot of the ball
scoring a great goal. The second-half was totally the opposite. It was a tale of two halves. I think they pressed us and we were not able to get out of that press.”

Sporting Kansas City came back to beat Houston 2-1 at home. Corey Baird scored for Houston in the 41st. Sporting’s Johnny Russell equalized in the 52nd and converted a 73rd minute penalty.

The LA Galaxy beat LAFC 3-1 at home. Kevin Cabral put the Galaxy up in the 51st with Javier Hernandez doubling the lead in the 57th. Dejan Jovelic made it 3-0 in the 81st minute. LAFC’s Ryan Hollingshead pulled a goal back in the 85th.

“The response of our guys, was not just about LAFC,” Galaxy coach Greg Vanney said. “It’s about losing two games, back to back, on our field. 3-1 and 3-0. That was a part of our response and a part of our emotion, and the team on the other side happened to be LAFC. Which, is a rivalry, which, also obviously adds a little bit of spice to the game. But our guys, I challenged them after the last game, they challenged each other and themselves. They couldn’t play in the LA Galaxy stadium and field the way we lost the games, the previous two.”

“It’s always interesting to see how the first 15 minutes go,” Feyenoord coach Arne Slot said. In that phase we had good control of the match. But a half is 45 minutes long. And our problems were to do with the choices our players made, with and without the ball. I told the players during the break what they had to do better. In the second half, we were sharp from the first moment, but you need a bit of luck and we didn’t get it. We had the time and opportunity to score, and we didn’t. Maybe that’s to do with the quality of the opponent.”