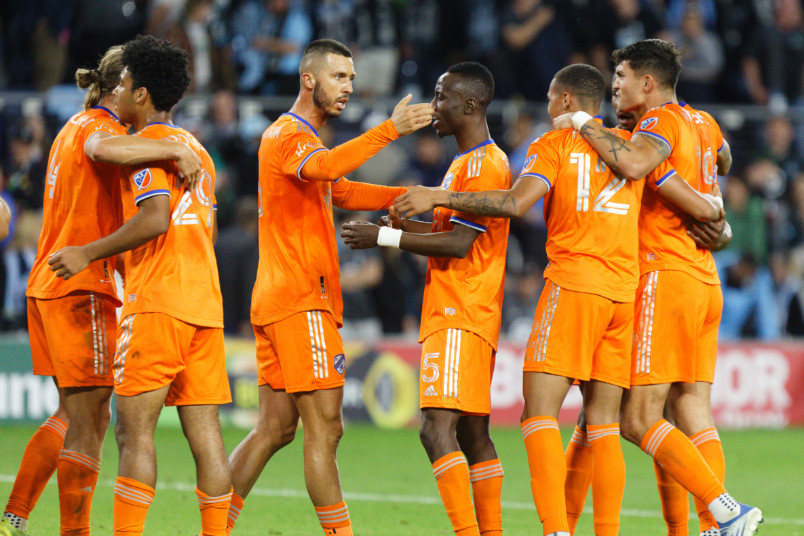 By Jason Davis – WASHINGTON, DC (May 11, 2022) US Soccer Players – When Chris Albright arrived at FC Cincinnati in October of 2021 as the club’s new general manager, his challenge was daunting. Albright represented the third attempt by FCC to get its soccer leadership right. Following three straight seasons of last-place finishes, the club finally secured someone with deep MLS experience to turn around its fortunes.

Albright’s first task was the biggest, hire a head coach. Get the choice wrong, and any good work remaking a dysfunctional roster might not yield significant improvement. The simplest thing to do was to hire someone who understood the intricacies of the league and would accept a rebuild they wouldn’t fully control.

Cincinnati’s ownership empowered Albright to make the hire without regard for name recognition or pedigree. That the club gave Albright the freedom to bring in Philadelphia Union assistant Pat Noonan, a man with no head coaching experience but with an excellent reputation as an assistant under Jim Curtin, spoke to a radically new approach.

A first-time GM and a first-time head coach normally don’t make for a quick turnaround. While it’s important to note that the 2022 season is just one-third complete, Albright and Noonan are showing tangible progress in Cincinnati. A three-game winning streak is an undeniable indicator that the sun is shining brighter in Cincinnati.

There are plenty of reasons for the recent turnaround, but they all come down to the new brain trust in Cincinnati. Albright, as architect and guide through the byzantine MLS roster rules, and Noonan, executor of the vision.

Albright has had just a single transfer window to improve the roster. Most of his moves involved acquiring free agents or executing mid-level trades within the league with a sprinkling of smart SuperDraft picks to round out the changes.

FC Cincinnati remade its goalkeeper position and most of its defense while also augmenting the established parts of its midfield and forward line, mostly through operating within the league. Working that way helped FCC work around past wasteful spending while upping the quotient of MLS-savvy veterans.

Among FCC’s leaders in minutes so far in 2022 are several key offseason additions, all of them with MLS experience. Junior Moreno, formerly of DC United, has started every game in midfield. Forward Dominique Badji, a man who has played for three other MLS teams, including two different stints with the Rapids, is a fixture up top.

Albright’s lone signing from outside of the league is very recent but already having an impact. Needing more of a defensive presence in midfield, the club brought in 25-year-old Nigerian Obinna Nwobodo from Turkish Super Lig club Goztepe. FCC took pains to point out Nwobodo’s ability to break up play in its press release about his signing. That reinforced that the club is fully committed to Albright’s vision, even if that means spending a coveted DP slot on a defensive-minded player joining from a small club in Turkey.

So far, the reviews of Nwobodo’s play have been excellent. In three appearances, two of them starts, he’s added the necessary bite in front of Cincinnati’s back line playing alongside Moreno. The marked improvement in FCC’s defensive record isn’t entirely down to Nwodobo’s arrival, but the club has collected two clean sheets since he took his place in the starting lineup.

Picking new players to make Cincinnati better is Albright’s job. Putting the new arrivals in a position to succeed is Noonan’s. But the head coach also has another task: getting the most out of the club’s holdovers. Two players, in particular, are reaping the benefits of Noonan’s arrival. Whatever Noonan lacked in head coaching experience, he’s already made up for in his sense of how to maximize the existing talent in his squad. Luciano Acosta and Brandon Vazquez stand out.

Once a bright young talent in the Atlanta United system, Vazquez found himself blocked from earning significant minutes by Josef Martinez and the club’s veterans. After three mostly anonymous years in Atlanta and plenty of reserve minutes, Nashville SC took Vazquez in the Expansion Draft. The club immediately traded him to FC Cincinnati.

2022 is Vazquez’s breakout moment. He established himself as a starter in 2021, but with the club sinking to another last-place finish, only managed four goals in 31 games. In 10 appearances so far this season, Vazquez already has six goals and is near the league leaders in a host of attacking analytic categories.

Vazquez is playing like a talented player finally given both the confidence of his coach and the requisite service with which to score goals. Noonan’s influence is obvious in both areas, with the latter part of the equation a result of how the new head coach is deploying Argentine playmaker Luciano Acosta.

Acosta was a known quantity when FCC acquired him from Atlas in 2021. Though his production fell off following the departure of Wayne Rooney and the collapse of a deal that would have sent him to Paris Saint-Germain, there was no question Acosta had the talent to drive an MLS attack.

Noonan put Acosta into a system that maximizes his time on the ball, ability to scan the field, and the options making runs ahead of him. With his ability to pick out teammates with laser-like accuracy from distance as well as play short, slipped-in passes behind back lines, Acosta is proving utterly dominant as a chance-creator because teams don’t know whether to close him down or sit back.

No one should be ready to start talking about Cincinnati as a “contender” if that word means “team with a realistic chance to win MLS Cup.” Regardless, Albright and Noonan’s double act is already changing Cincinnati for the better. What that means over the scope of the 2022 season could mean trouble for other Eastern Conference hopefuls.