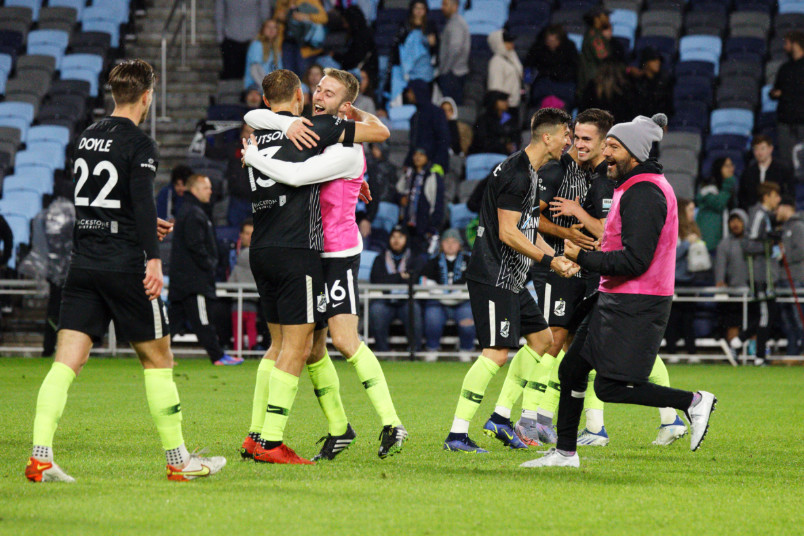 By Jason Davis – WASHINGTON, DC (May 27, 2022) US Soccer Players – Cinderella is still dancing in the 2022 edition of the US Open Cup. America’s knockout cup tournament hit the round of 16 on Wednesday night, with MLS teams dominating the proceedings. By the time the US Open Cup reaches this stage, it’s often lacking for teams from the lower leagues of American soccer.

Union Omaha defeated Minnesota United at Allianz Field 2-1 on goals from Hugo Kametani and Joe Brito. It was a battle of the birds that saw the Owls knock the Loons from the sky.

With all due respect to Sacramento Republic, the USL League One club’s win deserves the most attention. Third-division teams just don’t make runs like this. It’s tough to make comparisons to past tournaments because professional third divisions are a relatively new development for American soccer. Regardless, any third division presence at this stage of the Open Cup is a surprise.

Union Omaha didn’t have it easy, either. The club started its tournament against an amateur team, Des Moines Menace of USL League Two. They benefited from being drawn into a home match against fellow USL League One club Northern Colorado Hailstorm in the fourth round, but both of its wins over MLS opponents came on the road.

The first of those wins was on penalties over the Chicago Fire at Soldier Field in the third round. Omaha’s humbling of a top division club sparked an emotional response from Fire head coach Ezra Hendrickson.

“It was just not intense enough. We didn’t play fast enough and I felt like we were too casual on the night,” Hendrickson said. “We warned these guys that, when you play a team like this from a lower division, they feel like they have a lot to prove. They’re gonna come, they’re gonna bring intensity, they’re gonna bring the effort and we have to match that. And I don’t think that we did that tonight.”

Minnesota United head coach Adrian Heath was slightly more circumspect in his postgame comments, but he didn’t hesitate to call the Loons crashing out of the Open Cup against Union Omaha “embarrassing.”

“As I’ve just said to them, I’ve been here before and the longer I’m in football I’ll be here again,” Heath said. “The game is littered with it all over the world, Premier League clubs getting beat by fourth division clubs, and it’s invariably because you don’t approach the game in the right manner. I couldn’t have said anymore to the guys from Monday, Tuesday and tonight’s game of what to expect and what was to come.”

This group of giant-killers from the middle of the country is getting the kind of mainstream coverage that only comes with a Cinderella run in a tournament like the US Open Cup. Life in the lower division of American soccer is never easy. While Union Omaha had plenty going for it even before it took out two MLS teams in the tournament, the attention it’s getting now is invaluable to capturing attention in Nebraska and beyond.

“Expansion team” is less of an issue when the league didn’t exist until 2019, and Omaha worked to immediately compete for a championship. The club turned to a coach with local connections, former Creighton University assistant and first head coach of the University of Nebraska-Omaha soccer program Jay Mims, to lead the team on the field.

Omaha finished second in the standings in a pandemic-truncated 2020 season and advanced to the championship game against Greenville Triumph. COVID-19 canceled that game, with Greenville taking the title due to its higher points per game average. Omaha had already served notice to the rest of League One that the club would be a contender for the foreseeable future. That’s what happened last season when they finished in 1st-place and beat Greenville in the 2021 championship at home. While home might be a minor league baseball stadium, it’s what you make of it.

The Open Cup run is capturing attention outside of the diehard soccer faithful in Nebraska’s largest city. Suggestions that a soccer stadium in the city’s growing downtown area would fit the region’s changing demographics and entice young professionals to live in Omaha are popping up in the local press. What was a lower league soccer team tentatively beginning life in a growing city with no professional soccer history is becoming something of a movement.

It will stay that way, even if Union Omaha can’t knock off a third MLS team in the US Open Cup when it travels to Kansas City to face Sporting next month. But don’t put it past the plucky little club from Nebraska to spring another massive upset. At this point, it’s kind of their thing.