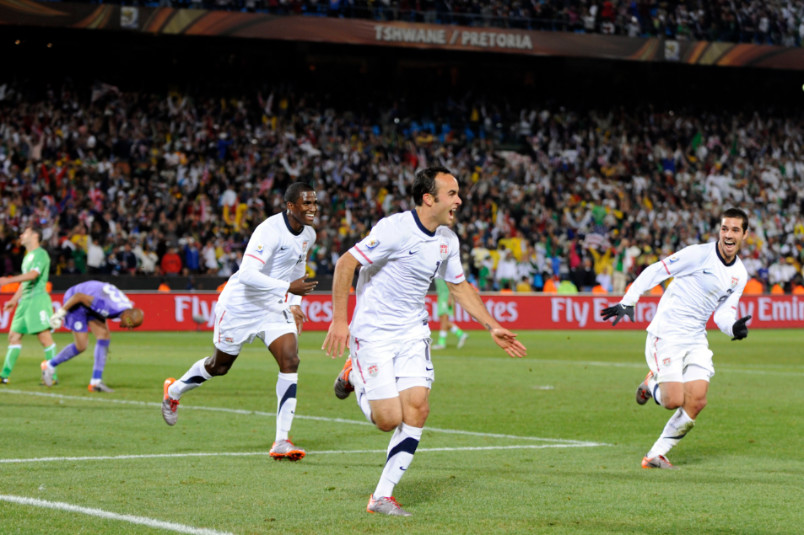 By Charles Boehm – WASHINGTON, DC (May 5, 2022) US Soccer Players – If USMNT coach Gregg Berhalter and his colleagues at US Soccer ever had any doubts about that power to inspire, a recent informal poll of the current USMNT swept them away.

“When I talk to our team, that diverse group of players that we have about their most memorable experience with the World Cup, the first thing that comes to mind to them is Landon Donovan’s goal against Algeria in the 2010 World Cup,” Berhalter said at the Aspen Institute’s Project Play Summit at Audi Field on Wednesday. “So the 2026 World Cup is an opportunity for us to inspire a nation, but inspiring individuals, in particular, under-served communities. Because our team represents them.”

Berhalter spoke alongside US Soccer Federation president Cindy Parlow Cone, US Soccer Foundation president and CEO Ed Foster-Simeon, and National Women’s Soccer League commissioner Jessica Berman in a keynote session about diversity and accessibility titled “How Soccer Can Transform Youth Sports.” While their conversation was wide-ranging, the World Cup’s impending return to North America was a key facet.

The 2026 edition of the tournament has long been branded as a watershed moment for soccer here. That could, perhaps must, be much more than just a lucrative business opportunity, though. For a sport with persistent, lingering problems around representation, the stakes are much higher than that.

“Everyone knows that access is a problem. Soccer is largely viewed as a rich white kids’ sport, and so I wanted to really find out and get data: OK, why is it that way? What are the real issues that are facing our sport and how do we remove those barriers?” she said. “And many from the soccer community have participated in the study and donated to have the study done. We’re just receiving the results and really analyzing that. But a lot of it comes down to how our sport is viewed – marketing, and how do we shift that thinking from ‘it’s a white kids’ sport’ to ‘this is a sport that is literally in every country around the world.’ And as the most diverse country in the world here in the US, how do we take that focus and make sure that every kid feels welcomed into our game?”

It may be a case of some forward progress highlighting how much distance remains. The USMNT’s combined talent and diversity has drawn praise. Berhalter pointed to the impact of the Development Academy, the elite national youth league USSF operated for more than a decade before shuttering it in 2020.

“What that did was provide opportunities, scholarships, for players to play in elite competition. What we saw was an increased level of scouting,” said the former Columbus Crew coach. “So these MLS clubs, and I was part of an MLS club, we actually went into under-served communities looking for players, wanting to bring them into our academy teams. And you’re seeing the fruits of that now with our team being an incredibly diversity team, and an absolute joy to be around. You see all these different backgrounds coming together. So I think part of it was scouting. Part of it was scholarships, and then finally, having standards, so, what coaching needs to look like, what the structure needs to look like to ensure that there’s a pathway for a player to make it from a youth academy all the way up to the pro team.”

Yet he also admitted that he wants to see more. More sustained outreach among working-class communities, more facilities, more access, on a greater scale. Parlow Cone acknowledged that it’s lower down at the grassroots that the greatest shortcomings remain, not only in soccer but across many youth sports.

“The top of the pyramid is looking pretty good right now. And it’s really that base that I am concerned about,” said the former USWNT and WUSA standout, who also manages and coaches youth soccer in North Carolina. “The value proposition can’t just be about making it to Gregg’s team, or making it into the NWSL and the professional leagues.”

It’s not just about nurturing future pros but future fans as well.

“The money in youth soccer is mostly at the elite level, which is taking away the focus from where I really think it should be, that entry level into the game, so that U-10 and under age group,” said Parlow Cone. “And really making sure that those kids are coming into the game and have a positive experience, have fun in the game while learning the skills, both soccer skills and life skills that we know are important, so then they become fans of the game.”

In fact, one less-positive aspect of the Development Academy was its policy of not allowing players to take part in outside competitions like high-school soccer. That detached many of the game’s top youth players from scholastic sports, a bedrock of US family life, in ways that still reverberate, especially for those without full access to club soccer.

“One of the things that I think is coming out of a study that I’m really interested in is bringing soccer to the schools, instead of requiring kids to go to soccer,” said Parlow Cone. “Because we know transportation is a problem and cost is a problem. So how can we bring soccer to the kids? And so you’re increasing exposure right there. Access is easier. There’s still a cost, but it’s a smaller cost. And so how do we all work together to create these programs, implement these programs, run them and make sure that they’re sustainable for a long period of time? These programs can take a lot of different looks. You can be in a PE class, after-school program, what have you. I think that’s one area that we all collectively need to work on.”

Could Parlow Cone be preparing a significant shift in US Soccer’s approach to the grassroots? It’s a striking possibility. This week’s conversation hinted at a wider understanding that the sport’s base is in need of attention.