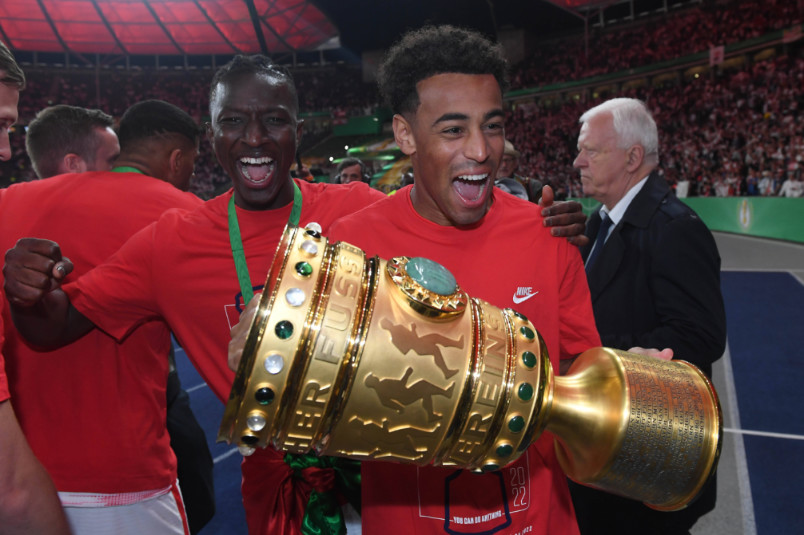 The roundup of USMNT players in France with the conclusion of the Ligue 1 season. Timothy Weah scored both goals in Lille’s 2-2 home draw with Rennes, finishing 10th. Weah put Lille up in the 11th with Rennes equalizing in the 41st. Weah made it 2-1 in the 88th. Rennes leveled the score three minutes into stoppage time.

“The players responded,” Lille coach Jocelyn Courvennec said. “We said we would go all the way. We missed a little thing to be in the fight for the last places, we missed the last quarter of the season, but we don’t miss our last games. I am nevertheless very proud of what the players and the staff have given since the beginning of July.”

Erik Palmer-Brown’s Troyes drew 1-1 at Lorient. Yoann Touzghar scored for Troyes in the 22nd and Lorient equalized in the 74th. Troyes’s Issa Kabore saw red in the 85th minute. Nicholas Gioacchini subbed on in the 64th minute of Montpellier’s 2-0 loss at Angers. Montpellier fell behind to a 45th minute penalty with Angers scoring again in the 67th. Montpellier finished 13th in Ligue 1.

Tyler Adams subbed on in the 99th minute of RB Leipzig’s DFB Pokal final win over Freiburg in Berlin. The game finished 1-1 in regulation with RB Leipzig falling behind in the 19th. Leipzig went a man down in the 57th and Christopher Nkunku equalized in the 76th minute. Kevin Kampf saw red for Leipzig in the 118th minute. Freiburg failed to convert in the second and fourth round of penalties with RB Leipzig winning the tiebreaker 4-2.

“I can only praise the boys for the performance,” RB Leipzig coach Domenico Todesco said. “It’s one thing to change the approach, and another thing to perform so well when you’re a man down, to defend so passionately. I’m incredibly proud of the team, all the players. Jesse Marsch has also played his part in the success, winning the earlier rounds. He left an intact team. It’s the same team, we just made a few adjustments.”

Manchester City clinched the 2021-22 Premier League title on the final day of the season with a 3-2 home win over Aston Villa. City fell behind to goals in the 37th and 69th minutes. Ilkay Gundogan scored in the 76th and Rodri equalized for City in the 78th. Gundogan scored Manchester City’s third goal in the 81st minute. Steffen wasn’t in the squad for City.

“We are legends,” Manchester City manager Pep Guardiola said. “When you win four in five then it’s because these guys are so special. We will be remembered. We won with 100 points, second one at Brighton, winning at home with our people is the best. Four Premier Leagues in five years is probably the best achievements we have done in our careers.”

Lynden Gooch’s Sunderland beat Wycombe Wanderers 2-0 at Wembley to win promotion to the Championship. Elliot John Embleton scored for Sunderland in the 12th and Ross Stewart doubled the lead in the 79th.

Yunus Musah subbed on in the 77th minute of Valencia’s 2-0 home win over Celta Vigo. Maxi Gomez subbed on in the 28th and an own-goal doubled the lead in the 60th. Valencia finished in 9th-place. A league down, Shaq Moore’s Tenerife lost 2-0 loss at Eibar. The goals came in the 19th and 84th minutes. With a game remaining, Tenerife has qualified for the promotion playoffs.

Luca De la Torre subbed out in the 62nd minute of Heracles’s 3-1 home loss to Excelsior, exiting the relegation playoffs 6-1 on aggregate in the semifinal round. Heracles will play in the Eerste Divisie next season. Sinan Baksis put Heracles up on the night with Excelsior scoring in the 47th, 63rd, and 83rd minutes. Mark McKenzie’s KRC Genk drew 0-0 at Mechelen to finish 2nd in Belgium’s Europa League playoffs. McKenzie saw yellow in the 49th minute. Sam Vines’s Roylan Antwerp won 1-0 at Union Saint-Gilloise. Michael Frey scored in the 71st minute. Antwerp finished fourth in the playoff round.

Brenden Aaronson subbed out in the 77th minute of Red Bull Salzburg’s 1-1 home draw with Austria Klagenfurt, seeing out their championship season. Falling behind in the 48th, Sekou Koita equalized for Red Bull three minutes into stoppage time.