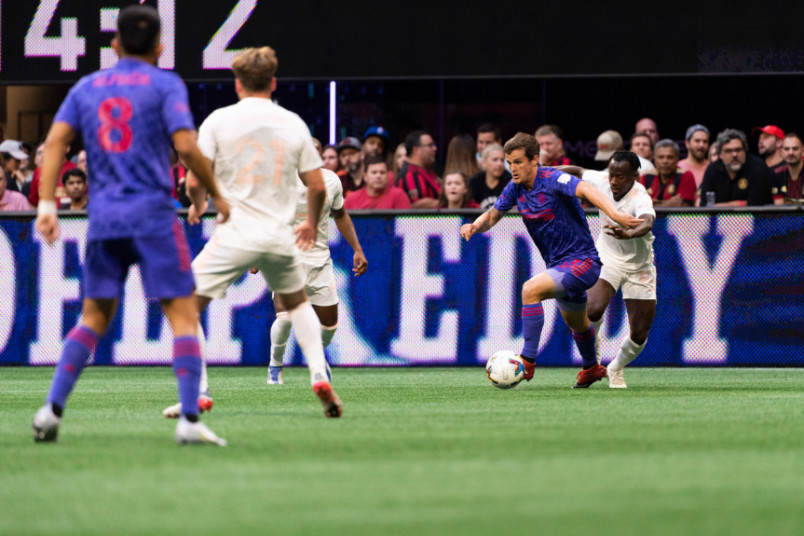 By Jason Davis – WASHINGTON, DC (June 3, 2022) US Soccer Players – Equal records don’t necessarily make for equal teams. Still, in a league famous for unbalanced schedules there’s something to learn from three teams in the same conference with identical records a third of the way through the season. Three teams in the East entered the international break with four wins, four draws, and five losses. That’s 16 points from 13 games. It’s a number that’s not good enough to put any of the trio in the playoffs, which makes for some soul-searching in early June.

We’re talking about the Columbus Crew, Atlanta United, and the New England Revolution. All three began the schedule with high hopes for a championship, though only one carried any momentum into 2022.

That, of course, was the Revolution. 2021 was one for the ages in Foxboro, a record-breaking campaign that saw the Revs set new MLS standards for points and wins in a season. Everything turned to gold last year in New England, with Matt Turner winning Goalkeeper of the Year and Carles Gil the league’s MVP.

Gil led the way, but New England secured the club’s first MLS trophy on the back of excellent seasons from all three of its DPs. Designated Player performance in MLS is much more hit-and-miss than clubs would prefer. The difference between a good season and a great one can come down to what returns a club gets on the biggest investments in the roster.

Forward Adam Buksa led the team in scoring with 16 goals and Gustavo Bou came in just behind him with 15. That’s 31 goals from two players. While there have been better singular seasons in MLS history, that kind of balanced production is rare.

2022 hasn’t been the same for the Revs. Things aren’t bad, exactly. Buska already has seven goals this year and Gil is still a maestro with the ball at his feet. Still, the three-headed DP monster is less dangerous. Part of that is the absence of Bou through injury. He returned to the field for the first time in two-and-a-half months against the Union on Saturday and scored his first goal of the campaign from the penalty spot in the 1-1 draw.

Even as Bou gets back on the field, the Revs face the end of this DP era and Turner’s time in goal. Credible reporting links Bou with a move to RC Lens of Ligue 1 in France. With New England not playing again until June 12 and the transfer window opening in France on June 10, Buksa’s time in Foxboro may already be up. Turner is expected to play one more game for New England after the end of the USMNT June camp before heading to London to join Arsenal for his first season in the Premier League.

It will fall to Bou and Jozy Altidore to pick up the scoring slack. Turner is almost impossible to replace.

Last year’s team already feels like distant memory. The sale of winger Tajon Buchanan ensured that Arena would have to remake the attack. Few teams in MLS could navigate the loss of such talented players and stay at a high level. When injuries exacerbate big changes, the process only gets more difficult.

Bruce Arena is too good a coach, and the Revs too talented even with those outgoing transfers to slip out of contention in one season. US international Sebastian Lletget (2 goals, 2 assists) has fit in nicely and figures to be a part of the solution.

While injuries have limited the Revs, they’ve devastated Atlanta United. That’s slowed the club’s resurgence under head coach Gonzalo Pineda. Thanks to those setbacks, Atlanta’s potential is a mystery.

The latest addition to the long list of United’s sidelined players came on Tuesday. The club announced that defender Ronald Hernandez will miss 3-to-4 months with a knee injury. Hernandez suffered an MCL tear in Atlanta’s 2-1 loss to Columbus on Saturday while filling in for injured fullback Andrew Gutman.

Atlanta lost Gutman last week to a long-term quad injury, a blow that came just a week after USMNT center back Miles Robinson ruptured his left Achilles tendon. Robinson ranked among the top center backs in MLS and anchored the Atlanta backline: His presence there was supposed to help the club better navigate a season without goalkeeper Brad Guzan. He suffered a ruptured Achilles tendon back on April 16. Veteran midfielder Ozzie Alonso also went down with an ACL tear on April 2.

“When it rains, it pours” doesn’t go far enough for Atlanta. Even positive news on the injury front like Josef Martinez’s return from a knee injury that robbed him of nearly two months is offset by another key player going down. The damage done to the backline is hard to fathom and forces Pineda to go well down the depth chart for cover.

The team that beat Atlanta on Saturday and ended United’s 18-game unbeaten run at Mercedes-Benz Stadium won’t shed any tears for their Eastern Conference rivals. The Crew needed the win in Atlanta to boost confidence in a group that has struggled to turn possession into points this season. Columbus doesn’t have the mass injury problem weighing down Atlanta, but it does have a problem finding goals.

Columbus’s win in Atlanta was its fourth away victory in 34 games going back to 2020 and gave the club its second win in its last ten league games. They need to make it the start of a trend, but they’ll be doing it without the magic of Lucas Zelerayan when the season resumes. A muscle issue will sideline the midfielder for 3-5 weeks.

If there’s such thing as “good timing” when it comes to an injury to your best player, this is it. The international break means Columbus won’t play again until June 18, limiting the number of matches Zelerayan will miss. There’s no scenario in which not having Zelarayan on the field is better for the Crew.

For the moment, Columbus is solidly part of the Eastern Conference’s soft middle. On paper, the Crew is a club that should be better than its standing. A bit of fortune, good or bad, might be all that determines if the club can live up to expectations. It’s the same situation for the other two teams with 16 points from 13 games.