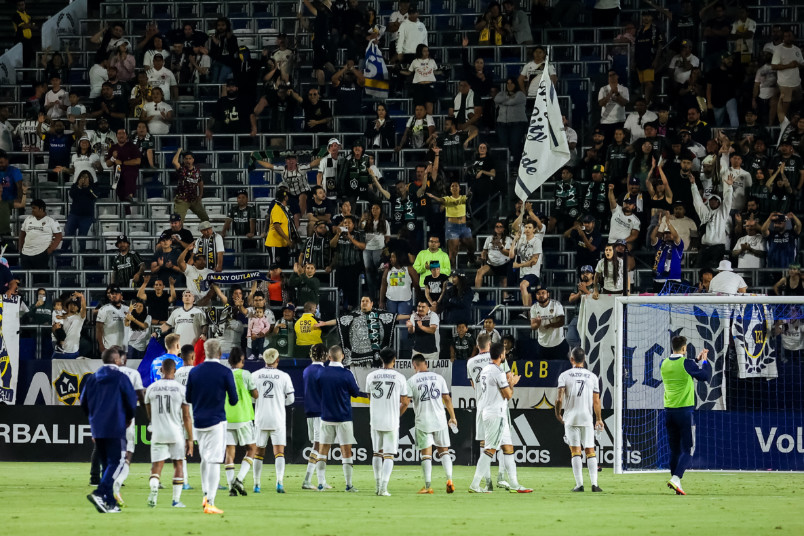 By Luis Bueno – RIVERSIDE, CA (June 22, 2022) US Soccer Players – Sitting in the Galaxy’s trophy display at StubHub Center are five MLS Cups and two US Open Cups. The problem for the most successful club in MLS history is that the last title came in 2014. That’s also the last time the Galaxy played for a trophy, a major issue for a club that has been to nine MLS Cup finals.

It looked like that might be nearing its end with the Galaxy reaching the US Open Cup quarterfinals. The Galaxy bested LAFC in the Round of 16 and had a lower-division team standing in the way of a semifinal appearance. Surely the club that claims its only plays for championships would have found the motivation to get past that round and into a semifinal.

Instead, the Galaxy exited the tournament with one of its worst losses, at least in recent years. The club fell to Sacramento Republic by 2-1 in an Open Cup quarterfinal match on Tuesday. The Galaxy is out of the tournament at least a round earlier than expected.

The loss is perhaps an unnecessary reminder for the technical staff that the squad remains a work in progress. The Galaxy has Western Conference rivals San Jose and Minnesota coming up in the next week and cannot afford to drop points in the Western Conference.

“I just feel like we didn’t adapt inside of the game,” LA Galaxy coach Greg Vanney said. “We didn’t have the right intensity. Some players. Some did. Some didn’t. The right intensity to dual and compete. And, I don’t have a great answer, but I would say guys who continually do that, won’t play. And that’s the message that they understand. Is, every player on the field has to play with the right intensity and the right intention. And not just play well, but play hard. And compete for those things. It’s a short turnaround. Them too. I don’t have anything other than what you would have as well. Is that the group needs to knuckle down and really fight and compete and battle. And the soccer game will come second.”

Seven-plus years have gone by without the Galaxy winning a championship, which alone is a troubling statistic, but it goes beyond that. The team has not come close to doing so. Since winning MLS Cup 2014, the Galaxy has reached the playoffs three times and has won all of two playoff games. The Galaxy did reach the 2016 US Open Cup semifinals but lost to eventual champions FC Dallas at home. That’s the closest the Galaxy has been to a trophy in that stretch.

The Galaxy is coming off two consecutive playoff misses, but last year’s squad gave hope that things were changing. The Galaxy looked strong, at least through the first three months of the season. In April and early May, they won four of six games, beating the likes of LAFC, Nashville, and Austin in making its presence felt in the Western Conference.

LA’s US Open Cup run was also going well. First, the Galaxy handled a tricky San Diego Loyal side, coached by club legend Landon Donovan and faced another lower-division side in Cal United FC in the following round. LAFC was up next. The Galaxy came out strong in that match even though LAFC started most of its regulars and came into Dignity Health Sports Park determined to win. Instead, it was the Galaxy who dominated and won handily, by 3-1 on May 25.

The Galaxy played a strong lineup against LAFC, starting six of the 11 players that were in the XI against Portland on Saturday. Their run to the quarterfinals showed a team that understood how to get Open Cup results. That changed against Sacramento Republic. Leveling the score from an own-goal, LA needed to press for a regulation winner at home. Instead, it was Sacramento scoring again. That game-winning goal came from a 40-yard strike from Luis Felipe with 20 minutes remaining. The Galaxy showed little fire in trying to get a second equalizer that never came.

“There’s disappointment. For sure,” Vanney said. “I think for the group, we’ve talked about this being something that we wanted to go for. And that was something important. And part of it was for the experiences like we had tonight. And, okay, it didn’t go our way, but this is what it feels like to lose in a knockout game. Games that matter. And, you only have so many games in the course of the season that are like this. Where there’s really something on the line. Where you really feel that…. That’s one of the reasons why we went for it. To have the emotion that is involved in a night like tonight. Good, bad or indifferent. Now we have to deal with it.”

On the road at San Jose on Saturday, they play the team Sacramento knocked out in the previous round. While there’s not as much surprise as there probably should be to see lower division success over MLS clubs in the Open Cup, it has to be an indicator of something. Used correctly, the Galaxy may be on their way to figuring out consistency in a Western Conference that’s only getting tougher once the transfer window opens.