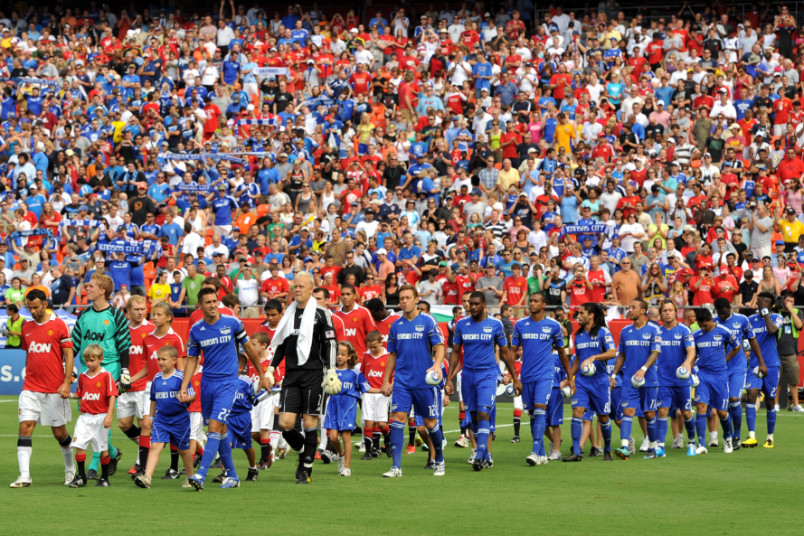 By Jason Davis – WASHINGTON, DC (June 22, 2022) US Soccer Players – Last Thursday, Kansas City was the lone Midwestern locale to be awarded matches for the 2026 World Cup. Of the 11 American cities chosen among 16 host cities in total, Kansas City ranks among the biggest surprises. They don’t have a new-ish NFL stadium like the other American hosts, and they’re the smallest metropolitan statistical area picked by FIFA.

That said, people in Kansas City will tell you it wasn’t an upset. Soccer is big in KC, and there is nothing undeserved about FIFA selecting their town to host games during the world’s biggest sporting event. Kansas City is a special place, and no one knows that better than Kansas Citians.

It was a different story the last time a World Cup happened in the United States. USA ’94 was a 24-team affair and featured nine host cities. Orlando was the outlier, the smallest metropolitan area but a familiar locale to anyone planning an American holiday. They got in over places like Philadelphia, Atlanta, and Miami, showing that picking the World Cup sites was about more than just making a list of those largest metropolitan areas.

USA ’94 sparked a soccer revolution in the United States, but the impact wouldn’t come to Kansas City for another two years. It was FIFA’s mandate that the US Soccer Federation launch a new national first-division league would prove a boon to soccer in Kansas City.

Major League Soccer placed one of its first ten franchises in Kansas City for the league’s launch in 1996, thanks to the longstanding soccer patronage of Kansas City Chiefs owner Lamar Hunt. The club was in the same position as the rest of the league, working for every bit of attention it could get in a sports scene dominated by the bigger pro sports leagues. The Wiz, then Wizards, played occasionally successful soccer in front of hearty crowds in an NFL stadium. The team boasted some of MLS’s early heroes like Preki and Tony Meola and won a league championship in 2000.

But the next decade did little to suggest Kansas City was on its way to becoming one of the country’s most vibrant soccer cities. While the new ownership that took over in 2006 opened a training facility the following year, a soccer-specific stadium would take longer. Attendance dipped at Arrowhead, with the club moving to a minor league baseball stadium in 2008.

History doesn’t often turn on singular moments, but there are often events that look like the beginning of a big shift in retrospect. Ask a Kansas City soccer fan or the club’s own website when things started to change for the sport in their city and they might point not to the opening of what is now Children’s Mercy Park in 2011 or Sporting Kansas City’s first championship under that name in 2013. Instead, they could name a friendly between the then-Wizards and Manchester United in the summer of 2010.

52,342 people filled Arrowhead Stadium two weeks after the end of the World Cup in South Africa to watch one of the world’s most famous soccer teams play a hard-scrabble MLS side from Kansas City. The crowd was hardly partisan for the home team, with most of those in attendance there to see United.

Despite playing down a man for more than a half, Kansas City pulled out a stunning 2-1 victory that captured attention around the region. Friendly or not, Kansas City beating Manchester United was the kind of news that resonated even with those sports fans unfamiliar with the intricacies of soccer.

The win couldn’t have been more perfectly timed. The club announced its name change from the Kansas City Wizards to Sporting Kansas City just a few months later and opened the doors to its new stadium the following June. All of a sudden, Kansas City was a soccer town.

Sporting didn’t end up playing in front of packed houses in its new building come 2011 because of one friendly, but it was a major step for building a soccer community. The 52,342 fans who showed up for that historic game against Manchester United in 2010 still represent a record soccer crowd for Kansas City, 12 years later. That record won’t last past the summer of 2026.

While most American cities would be able to draw big crowds for World Cup games regardless of the state of its soccer scene, Kansas City will do that while serving as an example of the rise of the game in the United States. It’s quite the story to tell.

It helped that Kansas City rolled out the red carpet to convince FIFA to give it serious consideration. Lawmakers passed a bill to suspend sales tax on match tickets. City leaders touted the construction of a new airport terminal and a plan to make $50 million worth of upgrades to Arrowhead Stadium. The city is also investing in public transportation, an exceedingly important thing during a World Cup. Then there were the fans, showing how much support exists in the region. The vibe in Kansas City was one of a true community effort to bring the World Cup to town.

41 bidding cities became 32 and then 26. Kansas City kept pushing forward. Its central location played a beneficial role, and other bids came up short in important areas clearing the way for what to outsiders seemed like an upset. It wasn’t. Thursday’s triumph belongs to Kansas City, adding to its well-earned reputation as one of the best soccer cities in the country.