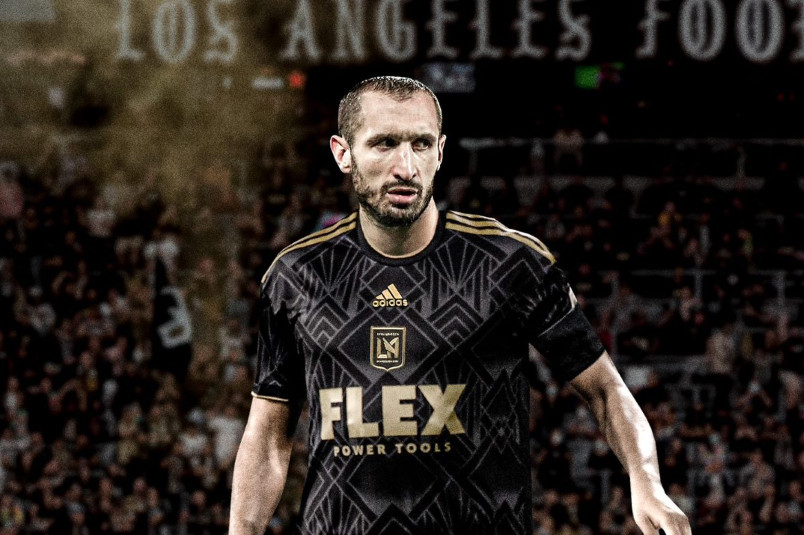 By Luis Bueno – RIVERSIDE, CA (June 15, 2022) US Soccer Players – Big-name players coming to Major League Soccer, particularly to Los Angeles, are not uncommon. Every season seems to add to a list that includes icons of the game. It’s no surprise that these big names have normally been attacking players. Goals and goalscorers, after all, sell tickets and create a buzz. LAFC is trying to make a splash now by bringing in a name player from Europe. Except this time, it’s their defense receiving an upgrade.

Giorgio Chiellini left Juventus after 18 seasons with the Old Lady and joined LAFC on an 18-month contract. At 37, Chiellini is still one of the best central defenders in the game, only recently calling time on his Italy career. The one where he made 118 appearances for his country.

“Giorgio’s experience will be invaluable to us,” LAFC head coach Steve Cherundolo said in the press statement announcing the signing. “He is one of the top defenders to ever play, he brings a deep knowledge of the game and an ability to have an impact on our young players both on and off the field. His addition is the perfect supplement to the work we are doing every day.”

Relative to scale and ambition, Chiellini joining LAFC is an outlier. Still, it’s not the first time an LA-based MLS club has brought in a veteran defender with international experience. In 2006, Claudio Suarez joined Chivas USA, making Mexico’s World Cup squad that summer at the age of 37. He would spend four seasons with Chivas USA, the only four seasons the now-defunct club reached the MLS postseason.

Few read the game like Suarez, something that made him invaluable in turning Chivas USA around. Off the field, Suarez also brought professionalism and leadership to a locker room that sorely lacked it. Suarez helped bridge the gap from Bob Bradley to Preki as Chivas USA switched coaches between his second and third seasons in MLS.

Bruce Arena took over with the LA Galaxy toward the end of the 2008 season. During that offseason he cleaned house and brought in many new players, young and old alike. One of the newcomers was Gregg Berhalter, who had spent his entire career up to that point in Europe. A veteran who played in the 2002 World Cup and was part of the 2006 World Cup squad, Berhalter had years of experience and a willingness to help make the players around him better.

Berhalter joined the Galaxy at age 35, making that irrelevant with his play. He helped stabilize what had been one of the worst defenses in the league. What worked for Berhalter was his positioning, quickly becoming an anchor on the backline and bringing professionalism to a team in flux. The Galaxy turned things around and made the MLS Cup in 2009 and won it in 2011, his last season of soccer.

It’s a different version of MLS and a different situation for
Chiellini. He isn’t joining a team in transition. LAFC is, in fact, in first place in the Western Conference and in the Supporters’ Shield standings as well. The team is not a lights-out defensive machine like NYCFC or Philadelphia but also not a shaky defensive team like Portland or Sporting KC.

Already solid defensively, with Chiellini LAFC could take the next step and become one of the toughest defenses in the league. The team has had some roster turnover on defense since the end of last season, which ended in an unceremoniously 5-2 loss at Colorado. The club acquired defender Ryan Hollingshead, goalkeeper Maxime Crepeau, and defensive midfielder Ilie Sanchez in the offseason. Chiellini is the crowning piece in that defensive makeover.

Playing in 21 games with Juventus this season, Chiellini went the full 90 three times in 2022. While he hasn’t logged more than 2,000 minutes in a season since 2017-18, it’s tough to compare Serie A to MLS. Then there’s what he did for Italy last summer at the delayed Euro 2022.

Chiellini played every minute of the quarterfinals against Belgium, the semifinals against Spain, and the final against England. The last two matches required extra time and penalties. Include the nine consecutive Serie A titles ending in 2019-20 and playing in two Champions League finals.

In their farewell letter to Chiellini, Juventus ignored all of that, writing, “You have seen that we haven’t dwelled on listing the medals you have won, the trophies you have raised or the awards you have earned, because those remain written in books. What we want to describe tonight, and throughout the week, so it remains forever, is your greatness as a person other than a sportsman.”

There’s the expectation that it won’t take long for Chiellini to find his role and figure MLS out. That’s the point of bringing in an elite player with his level of experience. Add to that improving the players around him, and it’s a sizeable upgrade for an already quality team.

LAFC has been the best team in the league so far this season, but clearly management did not feel comfortable maintaining the status quo. Adding Chiellini ensures that LAFC will be a bone fide MLS Cup contender once the playoffs start, probably the team to beat come October.