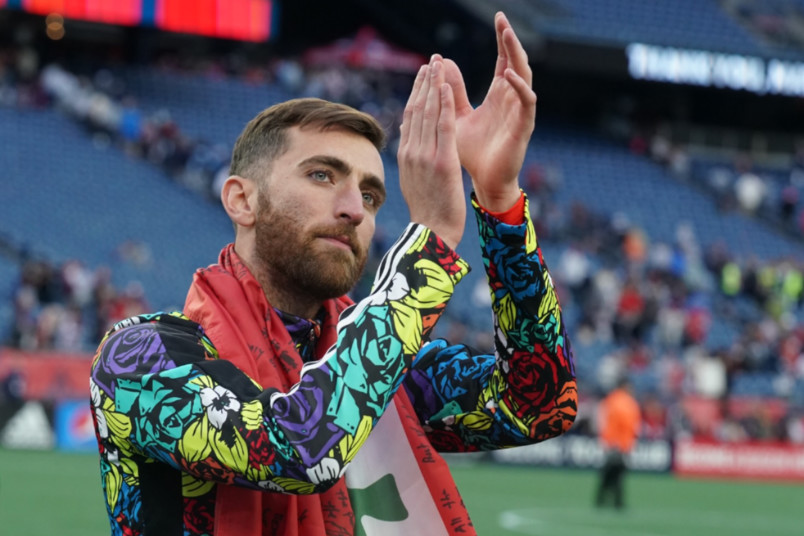 Monday’s soccer news starts at Gillette Stadium. Matt Turner didn’t play in his final game for New England, a 2-1 home win over Minnesota United that extends the club’s undefeated streak to eight games. New England is 6th in the Eastern Conference, tied on points with 5th-place Montreal but with an extra game played.

“I mean, it was on the cards, but at the end of the day, it’s about more than me,” Turner said. “This team has done well this week, got two good results, and Djordje (Petrovic) has been playing well. So, grow him into the role, you don’t need to throw me into a one-off game just to say goodbye. It was a perfect night in every sense of the word anyways, in my opinion, so it’s a results business and three points tonight, I think the correct decisions were made all across the board.”

Turner leaves this week for Arsenal after helping put together the best regular season in MLS history in 2021. Named MLS Goalkeeper of the Year and emerging as a contender for the USMNT starting job, New England announced in February that he would join Arsenal over the summer. An early season injury and international duty limited Turner to five games this season with the Revolution.

“You know, I’ve said this a lot of times. Matt’s a very good goalkeeper and an even better person,” New England coach Bruce Arena said. “So how he shows up every day is a real positive. He trains hard, he’s a good teammate, good person. We’ll miss that. He is a good story. It’ll be interesting to see how he does at the next level. Not only national team, but obviously, in the Premiership. It’ll be the next challenge in his life, and he’s not backed away from any challenges to date so it’ll be interesting to see how he does.”

With Turner joining Arsenal and Ethan Horvath’s Nottingham Forest winning promotion, the USMNT now has three Premier League goalkeepers alongside Manchester City’s Zack Steffen. The issue for all of them is getting cames with their clubs, something that has been an issue for Steffen with the Premier League champions and Horvath last season in the Championship with Forest.

There’s certainly value in any Premier League squad for having a strong backup goalkeeper. That works for club soccer, but it creates an issue with national teams where their best choices might not be regularly playing. What that means for USMNT coach Gregg Berhalter is an ongoing question. Before Steffen exited due to personal reasons, Berhalter’s goalkeepers for the June window were the three that will be playing in the Premier League this season.

Moving to the Segunda Division promotion playoffs in Spain, Shaq Moore’s Tenerife lost the playoff final 3-1 at home to Girona after drawing 0-0 in the first-leg. Girona converted a 42nd minute penalty with Carlos Ruiz Arenaga equalizing for Tenerife in the 59th minute. An own-goal put Girona up in the 68th and added a goal in the 80th minute.

Chelsea announced that chairman Bruce Buck is moving to the role of senior advisor. ‘I am proud to have helped Chelsea realize great success on the pitch and make a positive impact in the community,’ said Buck. ‘Now is the right time to step down and let new ownership build on the strong foundations we have in place. The owners have a compelling vision for Chelsea’s future, and I look forward to helping them achieve it in this new role alongside our incredible staff, players, coaches, and supporters.’

Concacaf U-20 championship on TUDN: Guatemala vs Panama at 8:30pm and Trinidad and Tobago vs Mexico at 10:30pm ET.