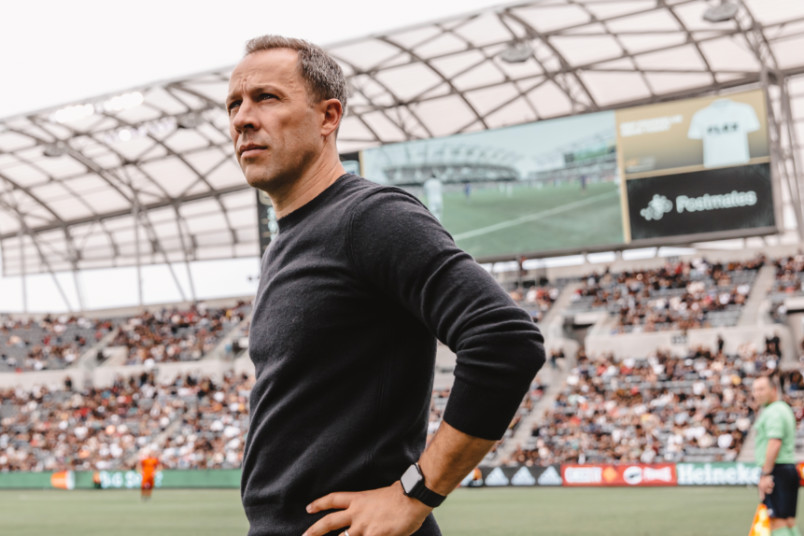 By Luis Bueno – RIVERSIDE, CA (June 1, 2022) US Soccer Players – As is commonplace during the summer now as the league has evolved, Major League Soccer will mostly take a break during the June international window. That break is great for some teams. For others, it could disrupt their momentum. So while the USMNT and the rest of Concacaf play friendlies and start the Nations League, MLS teams will try and rest, recover, and regroup to get right back at it come summer.

That could alter what we think we know in a league of week-to-week changes. Perhaps some of the teams can put the time to use as a way to find consistency and climb the power rankings.

Losing their derby at the Galaxy doesn’t count in these rankings because it happened in the US Open Cup. Losing to Colorado and Austin certainly do, but the churn of games keeps LAFC in the top spot. Once play resumes after the international break, LAFC will face three difficult tests from Seattle, the Red Bulls, and FC Dallas.

NYCFC has the eye-opening defensive stats to rely on, but the Union has allowed the same amount of goals as NYCFC (10) in one more match (14 versus 13). The Union needs a bit of spark to get out of its doldrums. Philadelphia had a rather astounding five draws and one win in May. The Union did have a five-game win streak earlier this season, but the recent lack of wins is now the story.

It’s hard for any team to top the month of May that NYCFC had. Not only did the club compile a 5-0-1 record, but the reigning MLS Cup champs did not allow a single goal over those six games. Only Toronto FC has been able to figure out NYCFC. In two games against the Reds, NYCFC has allowed six goals. The rest of the league has combined to score just four goals against NYCFC this season.

An international break? What’s that? Real Salt Lake will plow right ahead this weekend as the club visits Vancouver in the only MLS regular-season game on June’s first weekend. RSL remains the biggest mystery in the league. The club does not feature any big-name high-salaried players, has a very nondescript roster in general, but churns out result after result. RSL beat Austin, Montreal, and Houston in three of four games last month, unbeaten at home and four points out of 1st-place in the Western Conference.

FC Dallas had been doing well before a bad loss to Vancouver and followed that up with a rough loss to Minnesota. But FC Dallas showed why the club is in contention with a 3-1 win at Orlando City. Dallas had a solid month with wins over Seattle and the LA Galaxy, but scoring three second-half goals to overturn a 1-0 road deficit was a bit of a statement. This team still has potential.

After starting the season off with three consecutive losses, CF Montreal has been one of the best teams in the league. Montreal picked up its seventh win of the season on the weekend as it downed FC Cincinnati by 4-3, equaling an identical scoreline against the same club earlier in the season. Montreal has scored the most goals in the Eastern Conference (28) but has allowed 26 goals to offset that a little bit. Some more balance and this team could be even stronger.

New York won’t get much of a break. They get one weekend off before returning to action on June 11 against Charlotte and will play four games this month. Lewis Morgan is hitting his attacking groove as he scored twice last month, including a thundering volley against DC United, and has scored three of his six goals since April 24.
8. LA Galaxy (8). Certainly, the 4-1 shellacking of a very good Austin team to close out the month – and a notable win there to start it off – is fresh on everyone’s minds. May also featured two bad losses to the other Texas clubs (3-1 to FC Dallas, 3-0 to Houston Dynamo).

LA was Austin’s nemesis in May, at least half of the city anyway. Austin was no match for the Galaxy, losing 1-0 at home to open up the month and by 4-1 at the Galaxy to close out May. The club has that bad loss left to linger during the international break. The break is actually coming at a good time as Austin had a meager 1-3-1 record last month, only winning at LAFC.

Forgive the Sounders for a subpar month of league outings. Seattle was certainly competitive but managed just two wins from five league games in May. The Sounders had other things to worry about, as in winning the Concacaf Champions League. Winning that championship and still plowing through with league fixtures is rather remarkable. The break will give the Sounders some much-needed downtime before games return quickly. Seattle will play four league games between June 14-29.

Orlando could have had much more to show from May than a 1-2-1 record. They held a 2-0 lead at Austin before seeing two players get sent off and watching Austin come back to tie the match deep in stoppage time. Orlando may have had residual effects after as the club lost 3-1 to FC Dallas next time out.

Colorado is nothing if not inconsistent. Over the last six games, the club has followed up a solid win with a bad loss. Colorado shut out Portland at home on April 30, then fell to lowly San Jose. Then, the Rapids beat LAFC on May 14 by 2-0 at home but lost to Sporting KC 2-1. Colorado recovered with a 1-0 win over Seattle but was no match for Nashville, losing 3-1.

The Crew finally picked up a road victory in its seventh attempt, beating Atlanta 2-1 to close out the month. Jonathan Mensah scored his first goal of the season, and Eloy Room made some critical saves as the Crew showed some grit and determination on the road for a change.

Houston made some solid gains early in the season, but the team now lacks consistency. The Dynamo has not had consecutive games with points since early April. Overshadowing some nice wins over Nashville and the LA Galaxy were bad losses to DC United and Real Salt Lake as well as a tough setback against Seattle.

Nashville SC finally opened its stadium on May 1, and the club has done well to establish some solid footing at GEODIS Park. The club has yet to lose in four games there, but two wins and two draws leave some room for improvement. The team will get one week off, not too much downtime, before going right back at it. The next four games are against teams that have combined for 13 wins this season which gives Nashville a chance to climb up the table.

The Revs are doing just enough to hang around, winning one game in May and drawing the other three. The team will face some challenges upcoming as goalkeeper Matt Turner will play one more game in MLS before departing for Arsenal. Also, striker Adam Buksa is reportedly set for a move to French side RC Lens.

Minnesota finished April with two consecutive wins as it looked like the club had shaken off some early-season struggles. Instead, Minnesota had about as poor of a month as possible. The Loons picked up just one point out of a possible 18. And while outside competitions have no bearing on these rankings, they lost at home to lower-division side Union Omaha in the US Open Cup.

Inter Miami is one of the teams that the break might not have come at a great time. Miami has two consecutive wins and is on a four-match unbeaten run. They’re 5-2-2 in its last nine games as the club looks like it has turned things around somewhat. Leo Campana has been a revelation and a big part of the success, scoring six of his seven goals over this stretch.

FC Cincinnati did well to win the first three games of the month but lost two high-scoring games. That the club has six wins already is rather remarkable. FC Cincinnati had six wins in its inaugural season, then had four wins in 2020 and again in 2021. This season might feature more growing pains, but not like the kind the team had from 2019 to 2021.

A 4-1 home win over Chicago to start the month off was supposed to have revitalized Atlanta United. Instead, it was more that Atlanta got to play against a team also heading in the wrong direction. That was their only win since April 2, though a pair of 2-2 draws means closing out May with points from three of four games.

It’s too bad that quality does not count more than quantity. The Timbers took out their frustrations on Sporting KC on May 14 in a 7-2 rout. However, that was the Timbers’ only win of the month. They looked poor in the last two outings, against the Union and Inter Miami. Portland needs to find some consistency when their season resumes.

Expansion Charlotte is hovering near the playoff picture, winning two of four games in May. Then they made a coaching change to start the international break. Managing that decision now becomes part of their expansion season story, trying to make sure a shakeup doesn’t turn into a setback for a club that has slowly improved over the course of the season.

Toronto FC closed out May with a draw against DC and a win over Chicago. Five goals in two games is a positive step forward after scoring zero in three games prior to that. Alejandro Pozuelo scored a brace to help lead the Reds to the win. Pozuelo now has four goals after scoring just one a year ago.

San Jose is certainly exciting. At LAFC, both teams scored twice in the opening half-hour. The ‘Quakes eventually lost, but the game was certainly entertaining. Obviously, a team in their situation would prefer to be more than that. It’s worth pointing out that even in 14th-place, San Jose is only four points out of the final playoff position.

The Whitecaps’ latest win wasn’t overly impressive but it was meaningful. Vancouver won 1-0 at Sporting KC, moving from last to 12th-place. They’ve got plenty of opportunities to add points. Vancouver gets no break to recover, playing at RSL on June 4 in what will be four games this month.

DC opened the month with a 2-0 home shutout of Houston and then drew 2-2 at Inter Miami. They took one point over their next three games, the most recent a 4-1 loss at the Red Bulls. A lopsided loss in a rivalry game showed how much work DC needs.

Chicago went winless in May, having just one draw in five games to show for last month. They gave up 13 goals last month and their -7 goal differential is tied with Miami for the worst in the East. They host DC in their first game back from the break on June 18.

Here is Sporting KC’s situation. They’re tied for last in goals scored, allowed 26 goals (second in the Western Conference), and is the only team in the league with a goal-differential worse than -10 at -13. They’re currently on a nine-game winless streak, drawing two and losing two in May.