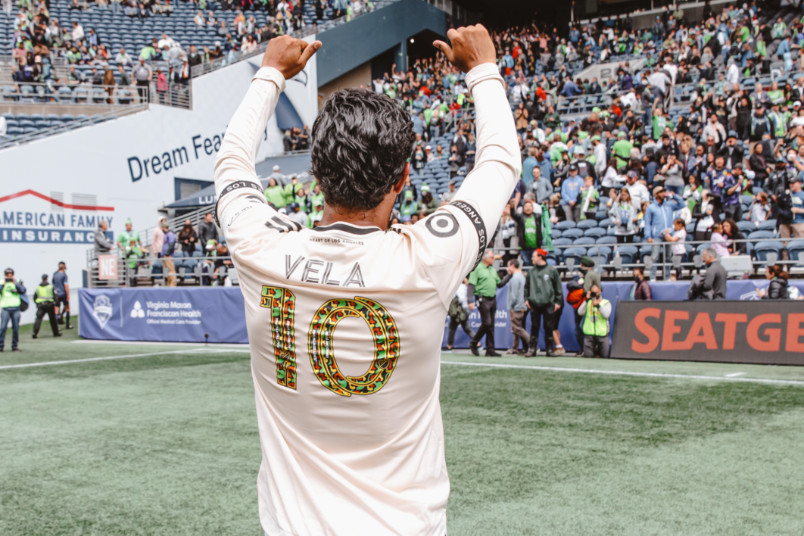 By Luis Bueno – RIVERSIDE, CA (June 29, 2022) US Soccer Players – LAFC sits in 1st-place both in the Western Conference and Supporters’ Shield standings as the calendar approaches July. The summer months, then, would be a time for the club to continue working with its pieces in place and trying to maximize the potential it has within its roster.

Instead, LAFC raised the ante quite a bit. That started by announcing that veteran Italian defender Giorgio Chiellini would join the club. Then, they added Welsh winger Gareth Bale on a free transfer from Real Madrid. Finishing off the major announcements, LAFC extended star Carlos Vela’s contract until the end of the 2023 season. Any one of those on its own would have been a bit of a statement. To make all three in less than a couple of weeks is a declaration of the team’s strength and desire.

We already knew that LAFC wanted to win trophies this season after a disappointing 2021. What we’re now seeing is how they plan on going about it. LAFC is building something bigger than simply seizing the spotlight. These aren’t just season-changing moves. They’re franchise-defining.

It might be debatable which was more important, signing Bale or re-signing Vela. After all, Vela has proven his worth and is easily one of the top players in the league. Without Vela, the team has struggled. Had he left at the end of June, it would’ve made things difficult for any version of LAFC.

Signing Bale sent ripples worldwide. That’s what happens with a player who was part of the Real Madrid squad that just won the league and Champions League titles. That brought Bale’s Champions League wins to five. Underlining his importance for club and country was helping Wales clinch a World Cup spot during the June window. He’s a player who knows how to win trophies and get the result in elimination games.

In a playoff league, elimination games eventually determine a season. In 2019, LAFC won the Supporters’ Shield by piecing together one of the finest regular seasons in league history. Vela won the league MVP that year after scoring a record 34 goals. But the club won just one game in the postseason before bowing out to Seattle in the Western Conference final. Last December, LAFC also came up short in the 2021 Concacaf Champions League final, leading late before eventually succumbing to Liga MX side Tigres.

LAFC’s record-setting 2019 team was a frontrunner from the start of the season, winning six and drawing one in its first seven games. The roster was already impressive, with LAFC bringing in Diego “Chiqui” Palacios. LAFC went 8-1-1 in July and August, underlining why midseason moves weren’t necessary. Then the playoffs undid LAFC’s work. Maybe that still resonates within the organization, improving an already good team at the first opportunity. There were standout players available to LAFC at reasonable costs, and LAFC went for it.

That sort of aggressive player acquisition has worked in Los Angeles before. Even though the LA Galaxy had David Beckham and Landon Donovan as part of one of the league’s best attacks in 2011, they added Robbie Keane late in August en route to an MLS Cup. Keane helped the Galaxy win two more in 2012 and 2014.

Being aggressive in player acquisitions set the Galaxy apart then and could have a similar result now, this time for LAFC. Already the Western Conference favorite, LAFC is building on the best record in the league. They’ve also won the most games (10), scored the most goals (32), allowed the fourth-fewest goals (17), and has the best goal-differential (+10) in MLS.

That team gets Bale and Chiellini. It’s the kind of “Hey, that’s not fair” moves the Galaxy used to make in its heyday. Those are also the types of moves that could help LAFC supplant the Galaxy once and for all as the top MLS team in town. The Galaxy still hold that unofficial title thanks in part to having beaten LAFC in league and US Open Cup play this season.

Whether LAFC can take a step toward that will be evident fairly quickly. LAFC will host the Galaxy on July 8, and both Bale and Chiellini could be in the lineup that day. A convincing win with Bale and Chiellini contributing would be quite an opening statement in helping LAFC declare 2022 as its year to win everything.