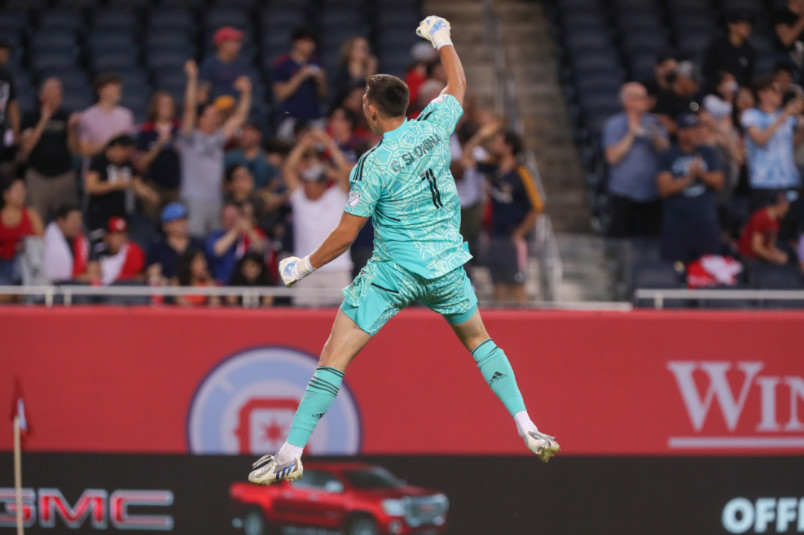 Thursday’s soccer news starts in MLS with another reminder that it’s tough to take much as a given this season. That was certainly the case for the two teams that started the night at the top of the Eastern Conference, Philadelphia and NYCFC.

Chicago beat 1st-place Philadelphia 1-0 at Soldier Field. Federico Navarro scored for the Fire in the 68th with the Union playing a man down from a 72nd minute red card to Jose Martinez. Fire goalkeeper Gabriel Slonina made two saves to keep the clean sheet.

“That’s not an easy team… that’s the first-place team in our conference,” Chicago coach Ezra Hendrickson said. “Everything we gave to them, they put up a fight. But finally, we were able to break through with Fede’s goal. I’m just happy for the guys because, you know, we just got to keep playing and keep pushing like this.”

2nd-place NYCFC drew 4-4 with Cincinnati at TQL Stadium. Luciano Acosta put Cincinnati up in the 15th with Brenner adding goals in the 24th and 30th. After failing to convert a 34th minute penalty, NYCFC pulled a goal back through Talles Magno in the 45th with Heber scoring twice in first-half stoppage time. Gabriel Pereira scored for NYCFC in the 52nd and Brenner equalized in the 70th.

“It was as good of 40 minutes as you can ask for against a really good team, and as bad of 10 minutes with that stoppage time as you could have,” Cincinnati coach Pat Noonan said. “Not walking off the field with three points at that stage of the game is certainly disappointing. We came out slow in the second half and conceded early. Certainly, we need to do a better job of getting pressure to the ball. But I was really pleased despite the really poor 10 minutes and the slow start to the second half with the character of the group to continue to push and find the fourth goal and really push for three points.”

Montreal came back to beat Seattle 2-1 at Lumen Field to move from 3rd-place into 1st in the East, tied on points with Philadelphia. The Sounders took the lead from a 3rd minute Jordan Morris goal. Montreal’s Mason Toye equalized in the 18th and scored again in the 62nd minute. Montreal and Philadelphia both have 29 points from 17 games with Montreal ahead 9 to 7 on the total wins tiebreaker. NYCFC is a point behind them in 3rd-place with a game in hand.

Columbus won 2-1 at Toronto FC. The Crew’s Sean Zawadzski scored in the 18th and Darlington Nagbe doubled the lead in the 30th. Jesus Jimenez scored for Toronto in the 54th minute.

“I thought, as I said to them coming back from the break, that second half was everything that we grew to expect from ourselves when we went into the break,” Galaxy coach Greg Vanney said. “The one take away from this game is that that sensation has to be present every time we step onto the field from minute one, as it was in the games where we played our best soccer because that was arguably some of our best soccer too and down a man. But it starts by the energy, the effort, the intention, the speed at which guys were going to close the ball down, close players down. It set the tempo and the tone for us.”

LAFC beat FC Dallas 3-1 at Banc of California Stadium. Danny Musovski put LAFC up in the 23rd and Dallas’s Jesus Ferreira equalized in the 38th. LAFC’s Cristian Arango scored in the 57th and Kwadwo Opoku finished off the LA goals in the 86th minute.

Portland beat Houston 2-1 at home with Santiago Moreno converting a 34th minute penalty and scoring in the 36th. Houston’s Darwin Quintero scored in the 65th. The Timbers’ Bill Tuiloma saw red in the 75th minute.

“I’m going to be very honest, even if we tie this game at the end there, I would be disappointed because I think what we did today here, I think we deserved the three points,” Houston coach Paulo Nagamura said. “That’s soccer. We didn’t finish our chances and we got punished.”

Moving to the US Open Cup quarterfinals, Orlando and Nashville drew 1-1 in regulation at Exploria Stadium with Orlando advancing 6-5 on penalties. Hany Mukhtar scored Nashville’s goal in the 52nd with City’s Rodrigo Schlegel equalizing four minutes into stoppage time. Nashville’s Sean Davis saw red in the 91st minute. With the score staying the same through extra time, Nashville failed to convert its first penalty and Orlando didn’t score in the 5th round. Nashville didn’t convert in the 7th round with Orlando advancing to host the New York Red Bulls on July 27.

Concacaf U-20 Championship on FS1: USA vs Honduras at 9pm. Liga MX on TUDN: Mazatlan vs Puebla at 10pm ET.