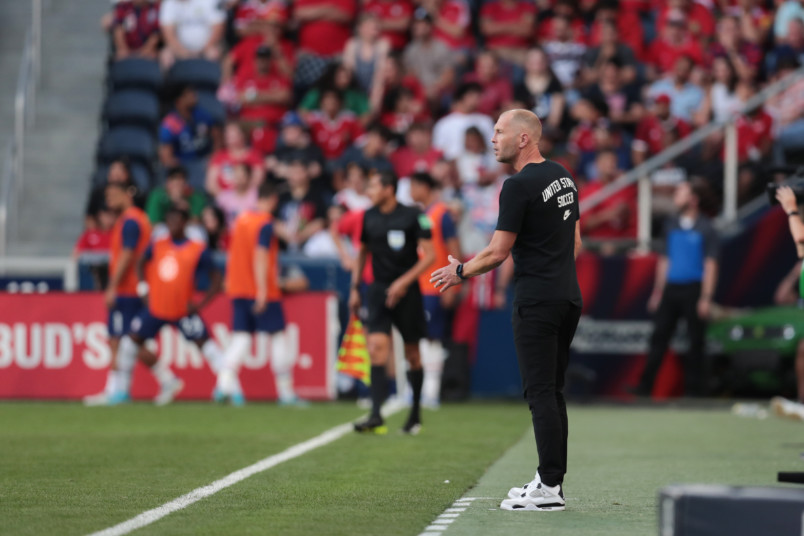 By Charles Boehm – WASHINGTON, DC (Jun 2, 2022) US Soccer Players – Wednesday’s 3-0 friendly win over Morocco in Cincinnati opened the home stretch of the USMNT’s winding road to the 2022 World Cup. With the countdown clock ticking a little louder with each passing day, every sequence, and every minute on the field matters for both individual players and the group as a whole. The scene now shifts to Kansas City, where the Yanks will host Uruguay for a different test at Children’s Mercy Park on Sunday afternoon.

Gregg Berhalter has long treated the 4-3-3 formation as the starting point for this team. Last month he hinted at further experimentation with a three-man defense as an alternative. Wednesday brought an interesting riff on that.

The spatial aspects of the 4-3-3 remained when the US was defending. As they built possessions from the back, it morphed into what the coach called a 3-2-2-3. Left back Antonee Robinson ranged forward, right back Reggie Cannon tucked in as a de facto third center back, and Yunus Musah dropped deeper into midfield next to Tyler Adams.

What that did was free Christian Pulisic and Brenden Aaronson, handed a rare central assignment rather than out wide, to sniff out pockets of space between the generally organized Morocco setup. Based on their combining for the opening goal and strong outings overall, the tactical adjustment was successful.

“We think that it’s a very difficult formation to play against, to build pressure against,” said Berhalter. “If you want to really commit to building pressure, you have to bring numbers forward. And once you bring numbers forward there are spaces that open up on the side of the field, and between the lines. So we wanted to use Christian and Brenden in those positions to really hurt the opponent. And then still have three guys high on the back line that could be running behind them and keeping their five (defenders) pinned back.”

Will the US also try out an alternate shape in defense? Uruguay is traditionally one of the more defensively rugged sides in the world, with a knack for attacking in transition. Sunday might be a moment to return to the 3-4-2-1 shape Berhalter has previously used.

Earlier in his tenure, Berhalter created a “leadership council” and rotated the captaincy among a long list of players. He made clear that he wanted to open communication channels and distribute the traditional roles of a captain among a broader segment of his group.

Most elements of that approach remain in place. Still, the program’s evolution through the trials of World Cup qualifying has underlined the gravitas of several influential personalities. Prominent among them is Pulisic, many of whose teammates have made clear is a key figure both with his level of play and his career path, which inspired so many of those who followed after.

The Chelsea star donned the armband against Morocco and played with urgency from the outset. He dazzled with his individual skill in creating the opening for Aaronson’s strike, then earned the penalty kick for the USMNT’s third goal. Rather than take it himself, he handed the ball to his former youth national teams comrade Haji Wright, who tucked it home for his first senior international goal.

“He was coaches’ man of the match today, for the way he led with his intensity, but also his play on the field. Great, great assist to Brenden, a number of other chances, got fouled for the penalty,” said Berhalter. “He had a really strong performance, but it’s more than the actions on the field. I think it’s the intensity in warm-up that he showed, I mentioned the selflessness of giving Haji the penalty kick in that moment, not needing the spotlight and not needing to score the goal, wanting to put his teammate in a great position. And that’s Christian. When you have leaders like that, you’re lucky.”

The USMNT were deserving winners over one of CAF’s top teams. The final score was nevertheless a bit misleading. Morocco created plenty of danger, forcing eight saves out of Matt Turner, and failed to convert a late penalty.

“I felt like the group went out and showed exactly how good we can be, but also at times were vulnerable,” said Berhalter.

Morocco’s wing backs enjoyed too much space, particularly in the early stages, enabling them to play a combined eight key passes. Showing both individual flair on the ball and collective understanding, the Atlas Lions repeatedly played through or around the USMNT’s press. They made good use of big switches of play that opened up the pitch and forced the defense to scramble. Some of the resulting tactical fouls would likely draw more attention in a World Cup setting.

The half-chances added up over time. A cheap giveaway just outside the US box led directly to a good look at goal for Azzedine Ounahi. A misjudged header on a cross into the danger zone gave Tarik Tissoudali an open header at close range.

Had a few of those or other marginal plays broken differently, the game might well have veered in a different direction. Limiting that has been a recurring theme in the team’s recent conversations with media. With their experience and savvy, and elite attackers like Darwin Nunez and Edinson Cavani, Uruguay is well-suited for exploiting even the most fleeting errors.

“Because talent on both teams is all going to be there, it’s going to be little tiny things that are going to decide games,” noted Cannon on Tuesday.

One of the main tools for controlling the potentially crucial variables described in the previous segment is control of a game’s rhythm. The USMNT adeptly varied patience and directness to good effect in the early going, then did well to make Morocco chase for extended stretches in the second half.

Some of their buildup play was lovely to watch. Completing passes at an 89% accuracy rate, the Yanks stretched the field and kept their composure on the ball, even deep in their own half. After the intensity of their pressing and counter-pressing proved difficult to sustain on a hot, muggy night at TQL Stadium, they wisely looked to play keep-away down the stretch.

“I think the weather affected the intensity of the game,” said Berhalter. “We went hard out but it affected you, right? You can’t recover as quickly in these conditions. So that was one thing. But I think it’s about moments. And we have to be really careful and really deliberate to keep the ball when we can, and really hurt the opponent in certain moments with the ball.”

He cited the methodical ball circulation that set the stage for Tim Weah’s goal from long range.

“How long do we have the ball before we scored the second goal? For a while, yeah,” Berhalter said. “And that’s perfect. I mean, just keep doing that. Keep wearing them down, wait for an opening and then play behind. The tempo, I think you need to control the tempo of these games, because there’s going to be very little separating the teams at the World Cup, and it’s about the teams that can control the tempo and then be decisive in the key moments.”