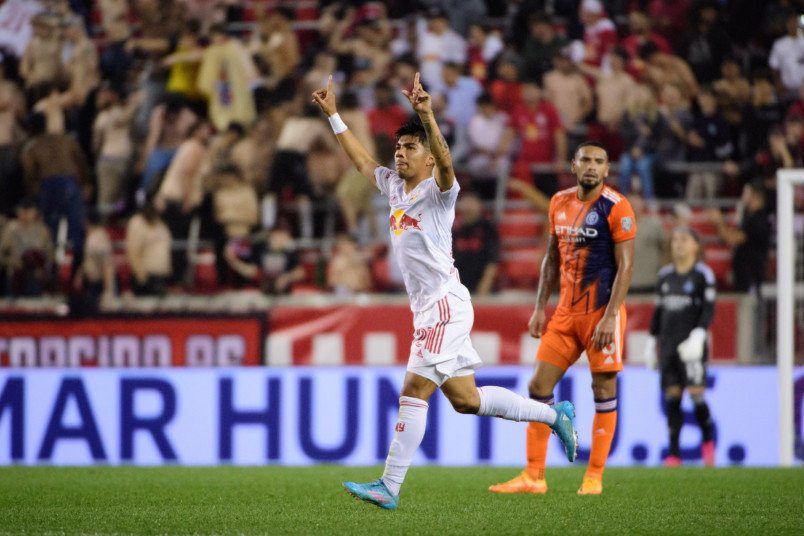 Thursday’s soccer news starts in the US Open Cup quarterfinals. The New York Red Bulls shutout NYCFC 3-0 at Red Bull Arena. Lewis Morgan put the Red Bulls up in the 52nd. NYCFC went a man down in the 62nd with a red card to Thiago. The Red Bulls doubled the lead through Luquinhas in the 70th and Omir Fernandez finished off the scoring in the first minute of stoppage time. Both teams saw red six minutes into stoppage time with Thomas Edwards exiting for the Red Bulls and Maxi Moralez for NYCFC. Red Bulls goalkeeper Carlos Coronel made three saves to keep the clean sheet. The Red Bulls now wait on the winner of next Wednesday’s Orlando City vs Chicago quarterfinal.

“We are right now, of course, very happy to realize the goal,” Red Bulls coach Gerhard Struber said. “And the goal was clear to go in the next round. The competition, the Open Cup, is for us a big point in this season.”

Sporting Kansas City had no issues with USL League One club Union Omaha, advancing 6-0 at home. Daniel Salloi put Sporting up in the 10th with Kortne Ford making it 2-0 in the 37th. Salloi scored again in the 53rd with Khiry Shelton adding a goal in the 56th. Sporting’s Felipe Hernandez added goals in the 66th and 81st minutes. They advance to play Sacramento in the semifinals on July 26 or 27.

“These are always really really dangerous games,” Sporting KC coach Peter Vermes said. “If you come with the effort, you have respect for your opponent, you understand that they want to win as well, and you go out and you play your game, then you give yourselves a chance.”

Moving to the Canadian Championship semifinals, Toronto advanced with a 4-0 home shutout of Montreal. Ayo Akinola scored in the 40th and 54th with Jesus Jimenez making it 3-0 in the 75th. Toronto’s Alejandro Pozuelo scored in the 78th minute. Quentin Westberg made three saves to keep the clean sheet.

In the other semifinal, the Vancouver Whitecaps knocked out York United with a 2-1 win at BC Place. Brian White scored for Vancouver in the 53rd and 73rd minutes. York United’s Isaiah Johnston pulled a goal back in the 84th.

Also in the soccer news, the Houston Dynamo announced that they’ll install mesh seats at PNC Stadium for the 2023 season, along with other stadium renovations. “As I have said since my first day, one of our biggest priorities is to enhance the game day experience for our supporters,” Houston Dynamo investor/operator Ted Segal said. “These improvements to PNC Stadium will allow us to improve the experience for every person who walks through our gates, draw more fans to the stadium and in turn give our players a stronger home field advantage. This project will also make our facility a more active and engaged community asset that serves as a more attractive destination for additional soccer and non-soccer events.”