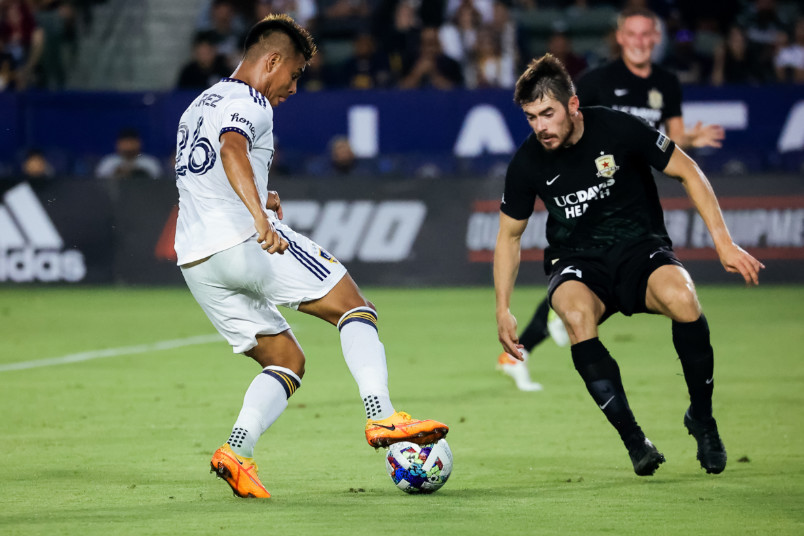 Wednesday’s soccer news starts with Sacramento Republic winning a USL vs MLS quarterfinal in the 2022 US Open Cup. Sacramento knocked out the LA Galaxy 2-1 on the road in Carson. Rodrigo Lopez put Sacramento up in the 4th minute with an own-goal leveling the score in the 18th. Sacramento’s Luis Felipe Fernandes scored their winner in the 70th minute. They advance to play the winner of tonight’s Sporting Kansas City vs Union Omaha game.

“The amount of, just, lack of concentration, turnovers, just simple missed passes, it’s just killer,” LA Galaxy coach Greg Vanney said. “Because then you’re having to transition again. It’s an energy suck. It’s an emotional suck. It was just poor. There’s just no two ways about it. It was just poor. You know, the guys pushed in the end. The second goal is… it just can’t happen. I know I could say a lot of things, but it just can’t happen. And then we’re chasing the game again. And once we’re chasing the game and the second one, then they just really had numbers behind the ball. Defended the goal well.”

LA becomes the second MLS team knocked out by Sacramento after beating San Jose 2-0 at home in the round of 16. Sacramento started with a 6-0 second round home win over Portland Timbers U23s. They beat Central Valley Fuego 2-1 at home in round three, knocking out Phoenix Rising in the round of 32 at Heart Health Park.

FC Cincinnati was the last USL team to advance to the semifinals, losing at home to the New York Red Bulls in extra time in the 2017 Open Cup. Cincinnati’s run started in the second round with an extra time win over NPSL club AFC Cleveland. They beat Louisville City in the third round and then knocked out the Columbus Crew and the Chicago Fire. Playing on the road for the first time in the quarterfinals, they beat NASL club Miami FC. The Red Bulls would lose to Sporting Kansas City in the final that year.

Moving to USMNT players in Europe, AS Roma has loaned Bryan Reynolds to Belgian First Division A club KVC Westerlo for the 2022-23 season. Reynolds played for Kortrijk on loan in 2022. Westerlo won promotion last season as First Division B champions.

In the soccer news, MLSsoccer’s Dylan Butler looks at the Galaxy’s playoff exit. The LA Times’ Kevin Baxter on a broader meaning for Sacramento’s Open Cup win. Soccer America’s Ian Plenderleith makes the case for reconsidering some of soccer’s rules.