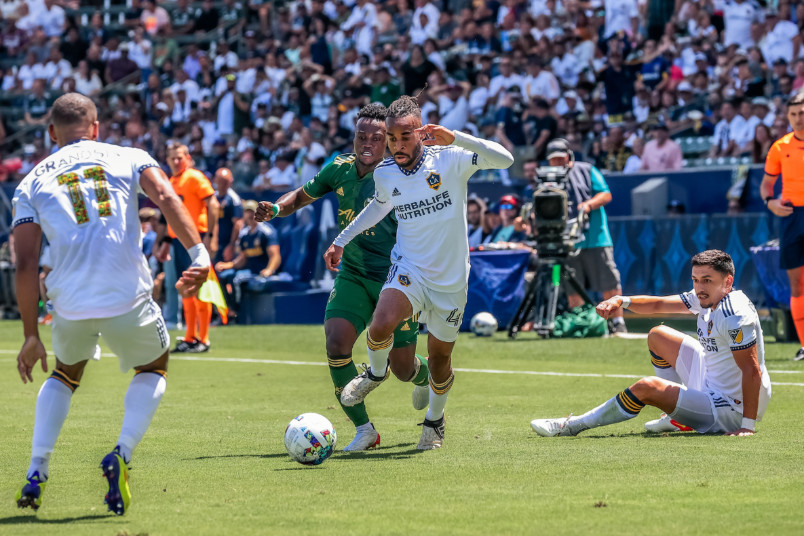 Tuesday’s soccer news starts with the 2022 US Open Cup quarterfinals beginning later tonight and concluding next Wednesday. With two of the games matching lower division clubs with MLS teams, it’s another round of potential upsets. For the two MLS vs MLS quarterfinals, it’s more about somewhat evenly matched teams trying to show some separation in the domestic cup.

The LA Galaxy hosts Sacramento Republic tonight with the Galaxy in 5th-place in the Western Conference. A 1-1 draw at home to Portland over the weekend highlighted their issue with consistently turning opportunities into goals and taking full advantage at home. It took an 88th minute equalizer to split the points in their first game after the June international break. It was their third home game in a row, losing 3-0 to Houston on May 22 and beating Austin 4-1 on May 29.

“But, I think again, we had some moments where we could have been more dangerous, where we could have maybe another goal or two,” LA Galaxy coach Greg Vanney said following the draw with the Timbers. “We could have got ourselves back into it a little bit. And we didn’t. And, again, we talked about it after the game, just being a little bit more clinical in front of the goal and things like that. But, again, I’d put it in the category of it just wasn’t a sharp performance from everywhere, pretty much, on the field.”

Sacramento travels to Carson in 5th-place in the USL Championship Western Conference, shutting out LA Galaxy II 2-0 at home on Saturday. Sacramento hasn’t lost since knocking San Jose out of the Open Cup on May 25.

On Wednesday, the Red Bulls host NYCFC in a meeting of 1st and 2nd in the Eastern Conference. How much league form matters in the Open Cup is always a question, but NYCFC has already shown how to balance outside obligations with MLS games during their Champions League run. NYCFC drew 1-1 at Colorado, only their second draw over their nine-game undefeated streak in league play. The Red Bulls are a point behind but with two extra games played, shutting out Toronto 2-0 at home on Saturday.

In Wednesday’s late game, Sporting Kansas City hosts Union Omaha. Sporting’s struggles this season are obvious, 12th in the West tied on points with 13th-place Portland but with an extra game played. Winning 2-1 at Nashville on Sunday was their first road win of the season and third overall. Union Omaha is 7th in USL League One, losing 2-0 at home to the Greenville Triumph on Saturday bringing a four-game undefeated streak to an end.

Orlando City vs Nashville waits until next Wednesday. With positions in the table subject to change, Orlando is in 4th-place in the East. They beat Houston 2-1 at home and play at Cincinnati on Friday. Nashville is in 6th-place in the East following the loss at Sporting KC. They play at DC United on Saturday.

Moving to September’s friendly schedule, the US Soccer Federation announced that the USMNT will play Japan in Europe on September 23 and Saudi Arabia at the Estadio Nueva Condomina in Murcia, Spain on September 27. “We are pleased to have the opportunity to measure ourselves against fellow World Cup participants,” US coach Gregg Berhalter said in a press statement. “Together with the two games in June against Morocco and Uruguay, we will have experienced a great diversity of styles and quality opponents to help us prepare for what lies ahead at the World Cup in November.”

MLSsoccer’s Joseph Lowery asks about Matt Turner at Arsenal. The LA Times Kevin Baxter on what the World Cup has meant for MLS. The Watford Observer’s Andrew French with Cucho Hernandez transferring from Watford to Columbus. Forbes’ Steve Price on the future of soccer scouting.

Canadian Championship on Fox Soccer Plus: Toronto vs Montreal at 7pm and Vancouver vs York United at 10pm. Concacaf U-20 Championship on TUDN: United States vs Cuba at 8:30pm and Honduras vs Costa Rica at 10:30pm ET.