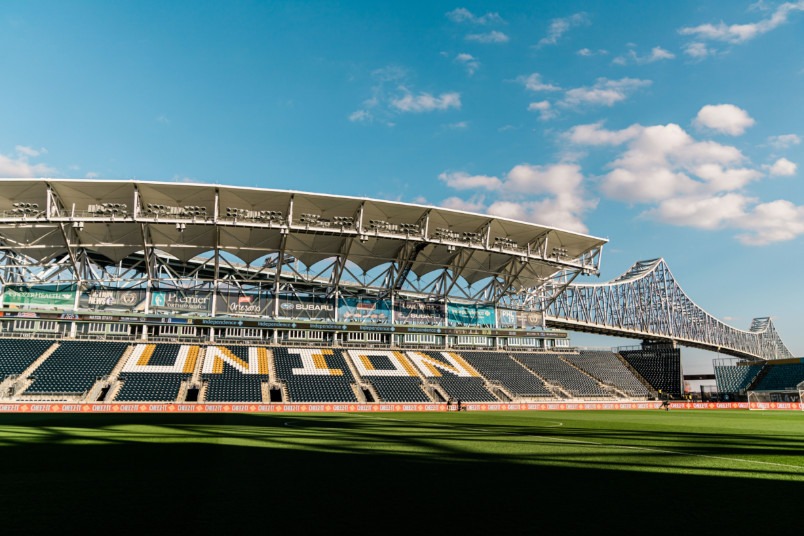 By Jason Davis – WASHINGTON, DC (June 29, 2022) US Soccer Players – Major League Soccer loves a good rivalry. Check that. MLS loves any rivalry, even ones that might not be immediately apparent. MLS decided long ago that pushing rivalry was a winning marketing strategy. Rivalry can come from nearly anything, but geography is the most common variable at play. Put a couple of teams on a soccer field representing cities that are within shouting distance of one another, and you’re bound to have a little more competitive fire than the average match.

Because good rivalries tend to happen organically, there’s a risk in scheduling teams against one another and labeling a rivalry. Even if there’s an extra edge to the game, fans might reject the premise outright. At the same time, that might actually help the truly organic ones stand out. After Sunday’s clash at Subaru Park between the Philadelphia Union and NYCFC, those two teams have a claim to a real rivalry.

Philadelphia and New York aren’t exactly strangers to rivalries across other American sports, so the Union and NYCFC finding themselves in a heated competition for the top spot in the Eastern conference makes sense. This is a rivalry that flows from the quality and ambitions of the teams involved. The Union has established itself as one of the powers of the conference. NYCFC reached the top of the mountain with an MLS Cup championship last season.

These are teams in conflict for the right to call themselves the best team in MLS. Until the playoffs arrive, tests of that claim are few and far between. When a week arrives pitting two teams at the top of the standings against one another with first-place potentially on the line, that guarantees extra drama.

Philadelphia won the match 2-1 on a stoppage time goal by Corey Burke. Giving the goal to Burke is technically correct but also extremely kind. It was Jose Martinez who took the shot that deflected off of Burke. The goal withstood a video review for a question of offside, frustrating NYCFC but thrilling the home fans in Chester.

Philadelphia’s victory seemed improbable going into second-half stoppage time after NYCFC striker Taty Castellanos equalized from the penalty spot in the 89th minute. That was the result of a VAR review of a marginal handball call on Philadelphia’s Kai Wagner.

For a club unbeaten in eight games but with a single victory in that span, another draw would have felt like a defeat for Philadelphia. NYCFC’s visit was a test of the Union’s championship credentials, or at least as much of a test as there can be in the first half of the season, making it worth much more than points in the standings.

The playoff-like intensity was obvious from the outset, with the Union setting the tone in front of its home fans. There’s a distinct contrast in styles between the two clubs, a circumstance that only adds to the entertainment value of the matchup. Where NYCFC wants to use the ball and dictate the pace of the game, the Union prefers to press, recover, and attack.

That disparity in approach reflects in the stats from Sunday’s Union win. Philadelphia had less of the ball but more shots and more big chances. The Union was the more physical team and committed 21 fouls to NYCFC 12. Jim Curtin’s squad doesn’t need any more evidence that its style can make for MLS success, but the manner in which it handled NYCFC is only more reason to believe the club can win a championship.

Philadelphia vs NYCFC even gave us one of those unexpected twists that can boost the intensity of a rivalry in a way only a red card to a trainer can provide. This is the latest part of a story that includes last season’s Eastern Conference final. NYCFC beat the Union at Subaru Park and went on to lift the trophy in Portland a week later, but that wasn’t the best version of the Union. Several key players, including goalkeeper Andre Blake, Alejandro Bedoya, and three other starters were missing because of COVID-19 protocols.

The team that lost to NYCFC in December wasn’t the team that sporting director Ernst Tanner and Curtin put together in the quest to win a championship. The Union hasn’t dwelled on the circumstances that led to the 2021 disappointment, but no one could blame the club if it carried an extra bit of hostility for the team that ended their championship dreams.

Rivalry is about consistency. The clubs aren’t scheduled to meet again this season but have a decent chance to meet in the playoffs. With NYCFC already having a more natural geographic rival, it’s going to take regular, high-stakes encounters between the two clubs to turn Union vs NYCFC into a meaningful rivalry that will stand the test of time.

Regardless, the rivalry is an intriguing one right now. It’s built on geography and history and bragging rights, organic, as it should be. The next round should be a doozy.