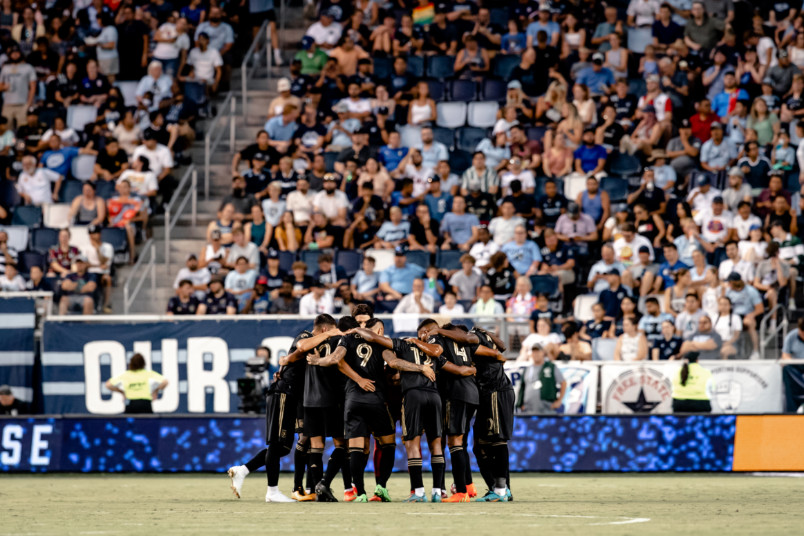 By Clemente Lisi – NEW YORK, NY (Jul 25, 2022) US Soccer Players – The MLS season is past the halfway mark, and things are getting even more interesting in 2022. Los Angeles FC and Toronto FC have made roster moves since the summer transfer window opened, the Canadian club in need of reinforcements after a slow start. LAFC looks like heavy favorites for the Supporters’ Shield and to go all the way, but MLS has a funny way of crowning unexpected champions come the fall.

In the meantime, both conferences have seen some competition when it comes to the top spots. In the Eastern Conference, the Philadelphia Union has been very strong, but both New York teams, the defending champions NYCFC and their rival Red Bulls, along with CF Montreal, are challenging for the top spot. Over in the Western Conference, LAFC is top, but Austin FC has been close, while both Minnesota United FC and Real Salt Lake have surpassed expectations. These are among the stories emerging so far from the 2022 MLS season.

While it’s normal to focus on the teams that have impressed, it’s often the ones that underachieve grabbing people’s attention. In the case of DC United, they have done just that this summer. Currently last in the Eastern Conference standings, DC United recently signed Wayne Rooney as their next coach.

The former England star, who played for DC United from 2018 to 2020, already knows how quickly things can change in this league. That’s amplified by what Chicago is doing, with the Fire’s three wins moving them up to 9th-place. That shows how quickly a struggling MLS club can start to salvage a season. 7th-place isn’t out of the question for any of the teams below the playoff line in the East, with DC already adding personnel.

Bale increases the attention on LAFC

Instead of talking about the Seattle Sounders, here we are focused on LAFC. Winning the Concacaf Champions League should make you the league’s “super club,” but it hasn’t this season. LAFC has aspirations to be a “super club.” It certainly has the roster to be one, but will the results follow? The team has had a very strong first half to the season – going 8-1-2 at home – and winning El Trafico. Striker Christian Arango leads the team with nine goals.

Reinforcements like Gareth Bale, who scored his first MLS goal Saturday in a 2-0 victory over Sporting Kansas City, and defender Giorgio Chiellini should only improve the side, although first-year coach Steve Cherundolo will be putting in the work to manage such a deep roster.

Toronto got off to a poor start, but they have tapped into their Serie A connections to bring in two Designated Player strikers in Lorenzo Insigne and Federico Bernardeschi. The Euro 2020 winners with Italy both made their debuts in Toronto’s 4-0 win on Saturday against Charlotte FC, with Bernardeschi scoring. The hope now is that Insigne and Bernardeschi will change the team’s dynamic.

While Toronto’s defense remains in question, an overwhelming attack will at least partially address that concern. There’s no downplaying that Toronto has given up 39 goals in 22 games, but their first outing with their revamped lineup saw them score four unanswered.

Philadelphia coach Jim Curtain has done a phenomenal job with the Union over the past few years. If this is the season where they win MLS Cup, it shouldn’t be a shock to anyone. Philadelphia continues building a culture of nurturing talent through the academy system and signing them to homegrown contracts.

There are nine Homegrown Players on the roster, and it’s easy to highlight attacking midfielder and USMNT U-20 player Paxten Aaronson after his MVP performance at the Concacaf Under-20 Championship a few weeks ago. The Union had three other players on the US squad, with the potential to carry that success over to league play.

It’s just part of the optimism that this could be the best team in the Eastern Conference, if not the entire league. That run of draws earlier this season looks more like a statement from a team that may not win but refuses to lose.

It was lauded as a historic first for any US sports league when MLS and Apple+ made a deal that will stream games without any local blackouts. It essentially eliminates local market games and makes everything available to everyone. The deal that begins in 2023 is all about streaming, the way millions upon millions of people now watch live sports.

“Apple is the perfect partner to further accelerate the growth of MLS and deepen the connection between our clubs and their fans,” MLS Commissioner Don Garber said in a press statement. “Given Apple’s ability to create a best-in-class user experience and to reach fans everywhere, it’ll be incredibly easy to enjoy MLS matches anywhere, whether you’re a super fan or casual viewer.”

That’s for next season. Right now, we’re watching a 2022 season that has yet to fully take shape. Given how key the final weeks of the regular season can be, it’s tough to underline any hard conclusions. It’s one of the things that makes MLS both unpredictable and competitive when so many other domestic competitions with more money and attention are often not.