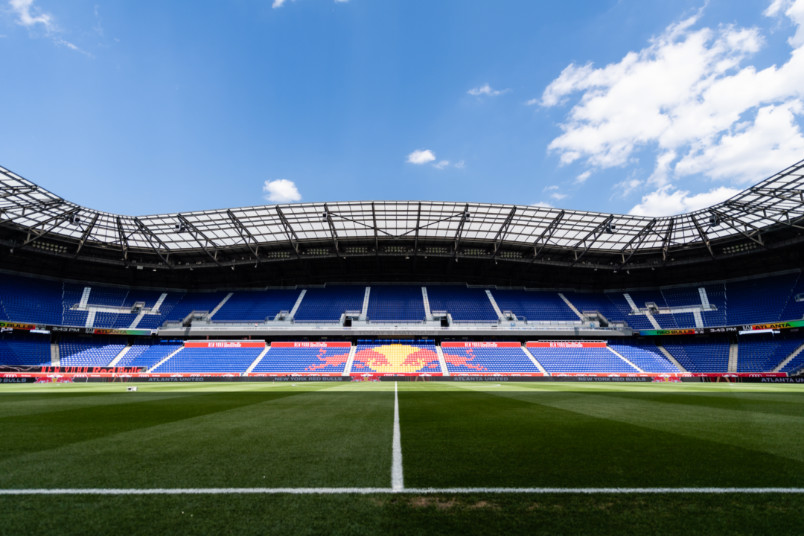 Friday’s soccer news starts with three teams tied at the top of the Eastern Conference table on 29 points. 1st-place Montreal has a game in hand and holds the total wins tiebreaker, but the Red Bulls pulled level after winning last night. They hold the total goals tie-breaker over the 3rd-place Union with NYCFC a point behind in 4th-place. A week ago, NYCFC was in 1st-place before Philadelphia passed them over the weekend.

The Red Bulls came back to beat Atlanta United 2-1 at home. Atlanta’s Josef Martinez scored in the 75th with New York’s Lewis Morgan equalizing from the penalty spot in the 83rd. Serge Ngoma scored in the 89th minute.

“I’m happy,” Red Bulls coach Gerhard Struber said. “But on the same time you can see how important it is to win at the moment. The table is so close. I think you have to win the home games, you also have to pick up points away that you can stay in the end, in the playoffs in a good spot.”

Austin beat Charlotte 1-0 at Bank of America Stadium. Daniel Pereira scored the game’s only goal in the 62nd minute with Austin goalkeeper Brad Stuver making two saves to keep the clean sheet. Charlotte drops to 10th-place in the Eastern Conference with 20 points from 18 games while Austin moves into 2nd-place in the West on 31 points from 17 games. They trail leaders LAFC by five points and are two points ahead of 3rd-place Real Salt Lake.

“It’s a busy schedule right now,” Austin coach Josh Wolff said. “We came out of a busy schedule before we got that 18-day break. So, I look at this next five or six games as a real tell-tale of what type of club we’re going to be.”

Also in the soccer news, Jordan Pefok is now a member of Union Berlin in Germany’s Bundesliga. “After two successful years in Bern, where I had the perfect environment to develop as a young player, the next step in my career is now ahead of me,” Pefok said in a press statement. “I want to prove myself in the Bundesliga and I’m sure that I have found the right club in Union. Their style of play suits me well and I’m looking forward to scoring for the Eisernen in the incredible atmosphere at the Alte Forsterei.”

Saturday has Liga MX on Telemundo: Chivas vs Juarez at 6pm. Univision has Tigres vs Cruz Azul at 8pm and Club America vs Atlas at 10pm.

Sunday has Liga MX on Univision: UNAM Pumas vs Tijuana at 1pm. TUDN has San Luis vs Leon at 6pm. Santos Laguna vs Monterrey is on FS2 at 8pm. The Concacaf U-20 Championship final is on FS1 at 8pm.

Monday has the Concacaf W Championship on CBS Sports: USWNT vs Haiti at 7pm. Liga MX on TUDN: Pachuca vs Queretaro at 10pm. All Times Eastern