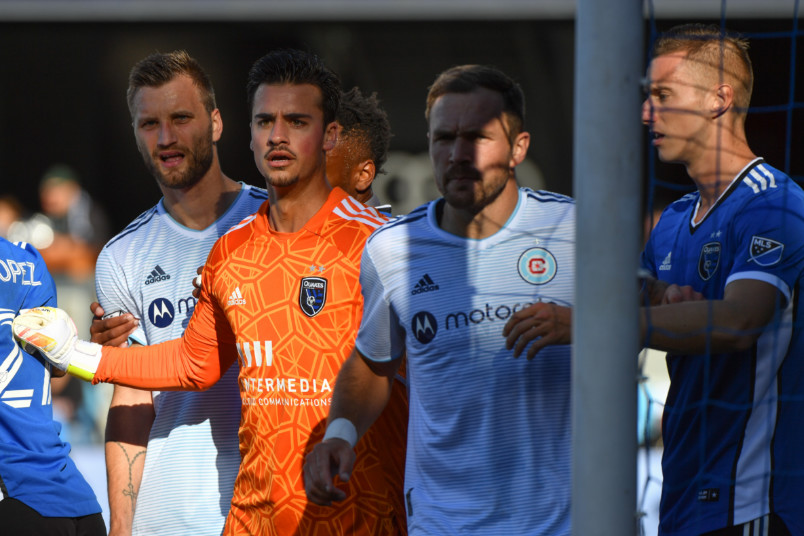 By J Hutcherson (Jul 5, 2022) US Soccer Players – While Monday’s holiday schedule extended the weekend, it remained a familiar story in Major League Soccer. The tables shifted, and it’s worth asking if reasonable assumptions have already followed along with them. The league has spent its matchdays confounding basic ideas about form and separating some clubs from the rest. Although that might make things interesting by keeping struggling clubs in the conversation, it has to confound technical staffs that would simply like to know what is and isn’t working.

Three Eastern Conference clubs and three more from the West have less than 20 points so far in 2022. Whether or not this is a valuable line, a win for any of them this week won’t push them up more than a couple of places. Right now, that’s enough of a distinction.

In the East, Toronto is in 12th-place on 18 points from 18 games, trailing 11th-place Atlanta by two points. Atlanta and the other two teams ahead of Toronto have played 17. Toronto lost 2-0 at home to Seattle on Saturday while they wait for Lorenzo Insigne to make his debut. There’s no doubt things could change quickly for a team with a revived attack with games coming up against San Jose and Chicago.

“The team of late, I’ve said many times that they’ve done a good job in terms of tempo of play, it’s gotten better, but tonight it went the other way,” Toronto coach Bob Bradley said.

Being a game-to-game club in MLS in 2022 is closer to the norm than a surprise. Things change quickly, even for teams in position to contend. For those further down the table, managing expectations is becoming increasingly difficult.

DC United is a point behind Toronto with two games in hand. Their 5-3 win at Orlando ended a run of three consecutive losses, part of a six-game winless streak. United’s upcoming schedule does them no favors, at Philadelphia, home to the Crew, and at Minnesota before hosting Montreal and Orlando. It’s hard to argue with what happened at Exploria Stadium, though. DC showed they can push a team in a playoff spot.

Chicago did the same thing two weeks ago when they beat Philadelphia at home. A week later, they lost at San Jose. That leaves them tied on points with DC but from two extra games played. What Chicago represents is the assumption problem right now in the Eastern Conference. Even a team that lost six out of seven games from April 23 to May 28 is still six points out of 9th-place. The team currently in that spot is Charlotte, with anywhere between one to three games in hand over the teams behind them.

“When you are on the road and you create chances like we did in the first-half, some clear chances like that, a couple of them alone with the keeper, you’ve got to put those away,” Chicago coach Ezra Hendrickson said. “When you don’t, stuff like this happens because we definitely gave ourselves opportunities to put this game out of reach in the first-half and we just didn’t take them. That’s something that has been plaguing us all season. We have just 16 goals so far this season. But this game was lost in the first-half, not putting them away when we had the chance to.”

Moving West, Colorado is in 12th-place with 19 points from 17 games, and without a win over their last four. The latest was a 3-2 home loss to Austin FC, a team joining LAFC in separating themselves at the top of the table. Colorado trails 11th-place Houston by two points with a game in hand. They also face a run of games starting at Real Salt Lake on July 9 and running through mid-August that shouldn’t provide for the easiest turnaround.

“But the final pass and final touch needs to be more consistent,” Rapids coach Robin Fraser said. “And that’s a word I’ve used a lot recently is consistency.”

Trailing Colorado by a point and level on games played is San Jose. Picking up three points at home against Chicago broke four games without a win for the Earthquakes. That included two losses and a draw against teams in Western Conference playoff positions.

“We start every week by being better each week,” San Jose interim coach Alex Covelo said. “We try to find solutions to beat them and tonight the guys did very well. It’s what we try to do every week, understanding the opponent we are going to face, sometimes we are luckier and have more opportunities, other times we are unlucky.”

At the bottom of the Western Conference, Sporting Kansas City lost at home to the Red Bulls, their second loss in a row and fourth from the last five games. Sporting did beat a team in a playoff spot during that run, 2-1 at Nashville. Sporting Kansas City and Chicago have the lowest goals scored number in the league at 16 each, but the Fire’s goal difference is -8 to Sporting’s -17.

“We had great chances tonight,” Sporting Kansas City coach Peter Vermes said following the loss to the Red Bulls. “We were very busy from the opening whistle, but we just couldn’t hit the back of the net. We’re off. The reason? I don’t know. But we had great chances in the game, more than enough to get three points for sure.”

That’s a recurring theme this season, carrying more weight than usual because, at times, it’s so obvious. Good vs bad may not exist in any meaningful way for most of a weekend’s schedule. While it’s tempting to talk about parity in situations like that, it might be teams still trying to work out what it is they do, to borrow Fraser’s word, consistently well this season. For enough of them, that isn’t a question that’s getting any easier to answer.