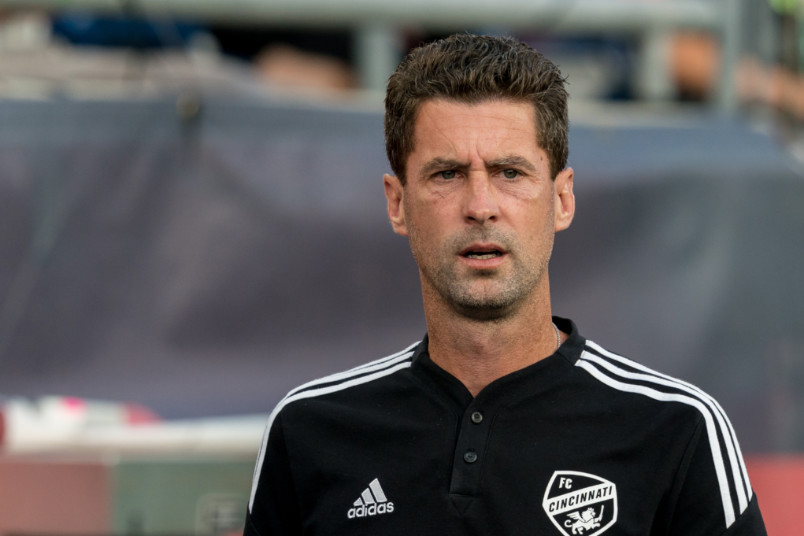 By Jason Davis – WASHINGTON, DC (July 8, 2022) US Soccer Players – While there’s a semantic argument about how many suggest a trend, Major League Soccer’s 2022 season arrived with several coaches getting their first chance in charge of a topflight team. Whether or not this is a turn in who clubs consider for their open coaching jobs, the opportunities were clearly there. Taking them were long-time MLS assistants as well as lower division coaches.

Any discussion of debut coaches in 2022 has no choice but to start with Steve Cherundolo’s LAFC. Cherundolo was already putting the work in before it became clear that LAFC would add significant talent during the summer transfer window. What he has now is easily the best team in MLS in theory and in practice, a remarkable situation for any coach, much less one that was in charge of a USL club this time last season.

Three of the coaches getting their first senior-level jobs this season, Paolo Nagamura of the Houston Dynamo, Pat Noonan of FC Cincinnati, and Ezra Hendrickson of the Chicago Fire, are facing different levels of difficulty so far in 2022. Both Noonan and Hendrickson spent significant years as MLS assistants, while Nagamura arrived in Houston off of a stint as the head coach of Sporting Kansas City’s reserve entry in the USL Championship.

Nagamura’s job with Sporting Kansas City II was about developing players within the Sporting system, similar to what Cherundolo was doing at the Las Vegas Lights for LAFC. Winning games was a secondary concern, a scope choice by the parent club. Instead, it was about teaching a system and what it might produce for the senior squad. While Cherundolo could be seen as promoted to the first team role as a known quantity within LAFC’s broader technical staff, Nagamura moved clubs when he took the job with Houston.

The first half of Nagamura’s debut season with Houston has been a roller-coaster of ups and downs. Few new coaches are handed teams ready to contend, and Nagamura is no exception. Recent returns are decidedly more down than up. The Dynamo fell to Charlotte FC 2-1 last weekend, becoming the first team in MLS to lose to the expansion side in its building. Giveaways undid Houston in front of a large home crowd, causing Nagamura to lament his team’s inability to perform consistently from match to match.

“That’s something that we need to work on, our consistency and especially playing at home,” Nagamura said following that loss to Charlotte. “I have been talking and I been saying this many times. We need to be more dominant. In the game today, one thing that we take away is that our giveaways will affect our game especially at home and I think today it did big time.”

The looming question for Nagamura and the Dynamo is how the arrival of Designated Player and Mexico international Hector Herrera will change the team and its fortunes. It’s not wrong to say that Herrera marks the beginning of a new era for Houston. The investment made to sign an El Tri great and former La Liga winner is a radical change under a new investor/operator who brought in general manager Pat Onstad and Nagamura.

Houston is five points off the playoff pace with 16 games left. There’s plenty of time for Herrera to make a difference within Nagamura’s system.

It’s a different situation in Cincinnati, where Noonan has dramatically changed the fortunes of his club. Noonan arrived in Cincinnati as part of an organizational overhaul three years into the club’s MLS existence. FC Cincinnati hired a first-time general manager in former Philadelphia Union technical director Chris Albright, who tapped Union assistant Noonan to be his field boss.

Through 18 matches in 2022, Noonan has Cincinnati in a prime position to challenge for the club’s first MLS playoff berth. The club’s rise from perennial Wooden Spoon favorite to a playoff contender is remarkable. With just more than half the season played, Noonan’s team has set a new high for wins in a season and is just one win shy of FC Cincinnati’s total from 2020 and 2021 combined. Week-to-week Cincinnati is a competitive outfit, and that’s a fundamental change.

Problems remain, particularly defensively, but Cincinnati has put the work in over the first-half. After a 2-2 draw with New England last Sunday that saw Cincinnati make several lineup changes, Noonan spoke about “the depth that we have of the group and the trust we have in guys to step in and perform for us.”

Cincinnati looks smart for having put its trust in Noonan. For perhaps the first time in its MLS history, the club has stable leadership with a clear plan who understands the ins and outs of winning in MLS.

It hasn’t been as straightforward for Hendrickson in Chicago, A highly respected assistant, he took over a team with deep-seated issues and years of disappointment behind it. Nine points from five games to start the campaign suggested better things for the Fire, but that initial burst of positive results didn’t last. Chicago moves into the second-half of the season at the bottom of the Eastern Conference standings.

Still, Chicago has had its moments recently. Their 1-0 home win over then-1st-place Philadelphia at the end of June showed a team capable of playing and winning a tight game.

“You know, we found ourselves in a position now that we need to win our home games,” Hendrickson said after beating the Union at Soldier Field. “What we spoke about before the game is that this is our fortress. We’re going to make it as such and come out every game and play as such.”

Turning to a first-time head coach makes little sense unless a club is willing to show patience as he learns on the job. It’s an unfair expectation for rookie head coaches to take the league by storm in year one, especially when leading teams during a rebuild. That it’s happening at LAFC shows how unique what Steve Cherundolo is doing really is.