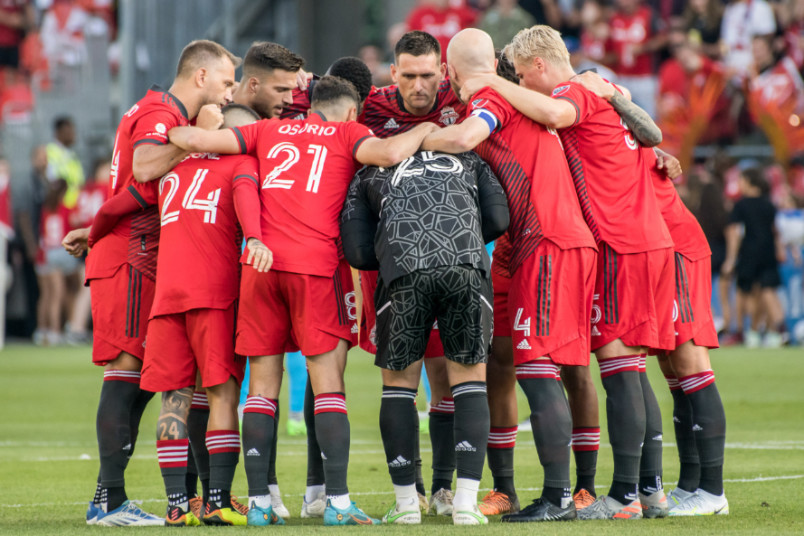 By Jason Davis – WASHINGTON, DC (July 29, 2022) US Soccer Players – Two-thirds through the regular season schedule, a pair of elite teams have emerged in the quest for 1st-place in the Eastern Conference and a shot at the Supporters’ Shield. The standings tell the tale: At the top of the East sit the Philadelphia Union and New York City FC, by any measure the two best teams in the conference.

The Union spent years building a contender and looks primed to make a run at the club’s first MLS Cup in 2022. NYCFC is in the midst of a transition following leading goal scorer Taty Castellanos’s departure but still has the talent to repeat as league champions.

And then there’s Toronto FC. Way down the table in 13th-place, the Reds hardly look like a team primed to make waves in the East. But a summer injection of expensive talent has turned the club into one of the must-watch outfits of the final run of games.

Saturday’s 4-0 shutout of Charlotte FC hinted at the possibilities for Toronto. A player who started his professional career in Toronto, former USMNT midfielder and current TV analyst Maurice Edu, saw reason to believe something big is still possible for Bob Bradley and his team in 2022.

“It’s hard to not be impressed,” Edu told US Soccer Players while also taking pains to point out that Charlotte is an expansion team that has struggled on the road. What most impressed Edu was the way the new additions gelled so quickly.

“It’s not like Insigne came in and just walked through everyone and scored Goal of the Week caliber goals,” he said. “It was a team effort in a completely dominant first-half to the point where they can make changes at halftime and still just see that game out. It looks like money well spent so far.”

The measure of that money this season will be TFC’s fortunes when it comes to the playoffs. Time is short, but the schedule gives the remade club a chance.

“The way that the rest of the schedule sets up, I think they have quite a few intraconference games. A lot of those games could end up being six-point swings. Things have to continue and they have to stay consistent. But the pieces that have come in have definitely given that side a tremendous boost,” Edu explained.

Edu knows Toronto better than most. The Southern California native who played college soccer at the University of Maryland was Toronto FC’s first-ever draft pick, the number one overall selection in 2007. He spent just a season and a half in Ontario, but Edu maintains affection for his first professional team. Though, in those early days, he couldn’t have seen what TFC would become.

“I love Toronto and in a different life I wish I could have still gone to Europe at the same time and somehow spent more time there,” Edu said. “It was, from a city standpoint, a beautiful city, amazing fan base, passionate fan base, a fan base that had been craving a team.”

“I think the ambition was always there,” Edu said when asked if he saw TFC’s big spending ways coming. “I didn’t know how it would play out. I think the motivation, the ambition matching the demands of the fan base and expectations of the fan base was always kind of priority number one for that club. There’s no fear in that club to go ahead and kind of set a new path or to raise the bar from a league standpoint.”

Toronto’s recent signings have injected new life into the team, but the Reds also rely on a player whose status as a leader is unimpeachable: Michael Bradley.

“He’s an incredibly smart player,” Edu said. “Father Time comes to all of us and he’s the guy that looks after his body really, really, well. He does all the things off the field… maintaining his fitness levels and eating right, his diet, his rehab, his recovery, all that kind of stuff. I think why he still has an edge, and can still be an incredible contributor to that team is because he reads the game really well, his IQ of the game, his ability to position himself.”

Toronto is chasing a playoff berth. Edu’s other former MLS club sits atop the standings, primed to make a run at its first MLS Cup title. The Philadelphia Union isn’t spending TFC money in their chase for a championship. The club has still built a contender, and according to Edu, one that fits the spirit of the city it represents.

“First and foremost, they take a lot of pride in being kind of gritty and hard-nosed and hard-working,” he said. “I think one thing that Jim (Curtin) has instilled in this team that they’ve all bought into is they know who they are. They don’t shy away from it. They don’t try to be someone that they’re not. They’re very, very comfortable and confident in the way that they play, the identity that they have as a club.”

The Union also has a veteran leader playing at an elite level at an age when most players are slowing down. Edu sees similarities between Bradley in Toronto and Philadelphia’s captain, Alejandro Bedoya.

“They don’t want to age. They refuse to age,” Edu said. “They just keep ticking along and finding ways to change, to find ways to bring up the best in themselves, to challenge themselves in new ways to manipulate their game. To make sure that they can still contribute and be important players for their team. You’re seeing that with (Bradley), the two goals he scored in the last game. You’re seeing that with Bedoya over the course of this season. He’s probably been one of their most consistent players. The reason why they both wear armbands for their teams, it’s not just what they do on the field, but it’s also the way they lead.”

The Union has something else going for it, a sense that the club was denied its chance last year.

“I think there’s a chip on their shoulder as well, the way that they went out of the playoffs last year with the whole COVID outbreak,” Edu added. “I think in the back of their mind, they all feel like the last couple of years they maybe should have been in MLS Cups.”

For Edu, Philadelphia is the favorite with NYCFC a “close second” behind the Union in the conference race despite losing Castellanos. From there it gets tougher to see contenders. With the new additions, is TFC there yet? Edu isn’t ready to commit.

Photo by Will Matthews – PA Wire via ZUMA Press – ISIPhotos.com