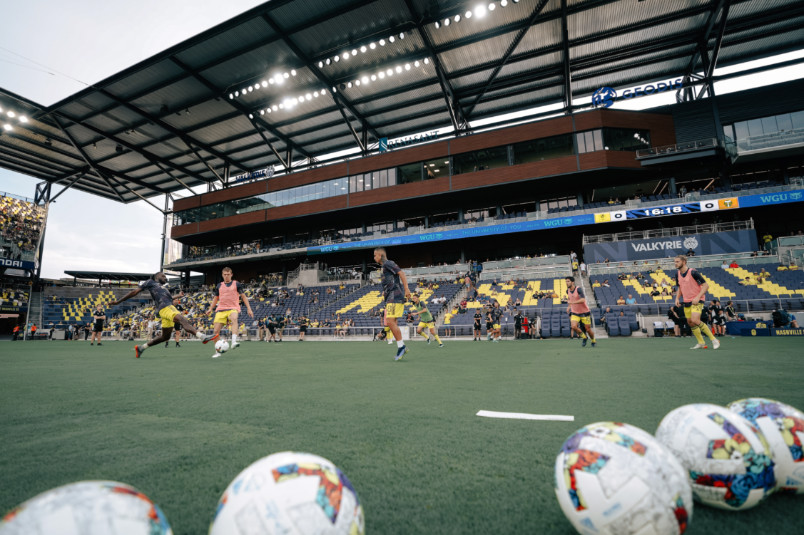 By Luis Bueno – RIVERSIDE, CA (July 6, 2022) US Soccer Players – Summer is officially here, days are longer and warmer, and MLS is getting more intense and meaningful. To add to the excitement, several clubs will welcome new and, in many cases, high-price additions to the fold this month. The likes of Hector Herrera, Lorenzo Insigne, Cucho Hernandez, Giorgio Chiellini, and Gareth Bale are among the international names expected to debut in July. Those players should make an impact in the league and on these rankings soon enough, with Chiellini and Bale trying to keep things the same in the top spot.

Any club adding Chiellini and Bale will improve, and that’s saying something considering that we’re talking about the team to beat out West. These two players will add quality, leadership, and experience while giving LAFC the best depth in the league. Scary thought for the rest of MLS.

New York just continues to plug right along this season and now sits in 1st-place in the Eastern Conference. Charlotte surprised New York, and the club also struggled at LAFC. Otherwise, New York has piled up points since the break. New York’s 2-1 comeback win over Atlanta was solid, and they did enough to get a shutout win at Sporting KC on July 3.

Philadelphia passed its biggest test last month, beating NYCFC 2-1 on June 26. The Union lost its next game 1-0 to Chicago and then finished 0-0 against Columbus. Now in 2nd-place in the East, the Union plays in-conference for four of their five remaining games this month, with three at home.

Real Salt Lake started July with a schedule heavy on conference opponents outside of the playoff spots. That began at Minnesota, where RSL scored two late goals in a 3-2 loss. They now need to make sure that they’re taking advantage of that schedule, hosting Colorado and Sporting Kansas City and playing at San Jose. August isn’t going to be so kind, opening the month with LAFC at home and Seattle on the road.

After only winning once in May, Austin FC won twice on the road in June. To start off July, Austin came back from 2-0 down after 22 minutes to win 3-2 at Colorado. This is a team that’s only going to get stronger as the season progresses.

Coming off of three wins in May, the June international break seemed to have had a negative impact on FC Dallas. Winless in their last four games, they opened July with a 1-1 home draw with Inter Miami to take two out of 12 points since the break. Still, Dallas remains one of three teams tied on 27 points behind the 4th-place Galaxy and ahead of 6th-place Nashville.

While the Open Cup doesn’t count in these rankings, losing at the Red Bulls in the quarterfinals and then in the league to Philadelphia four days later highlighted an interesting month for New York. They scored six goals over their next two games, a 4-4 draw at Cincinnati and a 2-2 home draw with Atlanta to open July. It’s tough to see that as six goals scored or six goals given up.

Seattle opened July with a solid 2-0 road win at Toronto FC. The win kept Seattle in 7th-place in the West on 26 points, one point behind Nashville, FC Dallas, and the Galaxy, who are all even on 27. The question has been when for Seattle for a while now. The answer may be soon, with the club on a six-game undefeated streak the last three of those wins.

Montreal had the best and worst of road results, knocking off Seattle in a 2-1 come-from-behind win before falling flat against the LA Galaxy in a 4-0 loss. Losing the finale of a west coast swing only says so much about any team. Montreal is still in a prime position in a competitive Eastern Conference, playing three of their four remaining games this month at home.

The Galaxy ended up playing five home games in a row from May 22 to July 4, six if you count the Open Cup loss to Sacramento Republic. In MLS, they took seven of 15 points, turning around a 3-2 loss to Minnesota by beating Montreal 4-0 on July 4. Next up is a short road trip to play LAFC and a home game against San Jose.

Nashville exited the Open Cup on penalties to close out their June schedule. They took a 2-0 lead at home against Portland to start July, only to draw 2-2. It’s not going to get easier at Charlotte and then home to Seattle and LAFC.

FC Cincinnati drew 4-4 at home with NYCFC on June 29 in a game where they led 3-0. Then it was 2-2 at New England. They’ll get another tough Eastern Conference test at home against the 1st-place Red Bulls, but that could end up showing that this scrappy side may have plenty to say about the title race.

Maybe consistency is not in the cards for Orlando City, winning consecutive matches just once this season. June was no different. Orlando City followed its 2-1 win over Houston with a 1-0 loss to FC Cincinnati. After advancing in the Open Cup, they lost 5-3 at home to DC United in the league. Orlando plays five more league games this month, and all but one are against Eastern Conference rivals.

Vancouver found the switch. The season started poorly, but Vancouver’s fortunes began to change once the calendar turned to May. Since May, the Whitecaps are 6-2-2 and have beaten the likes of FC Dallas, Real Salt Lake and, most recently, LAFC. As a result, they’ve climbed to within two points of 7th-place and should see an opportunity for more this month.

Columbus has allowed the second-fewest goals in the Eastern Conference but does not have the position in the table to match. They’re in 10th-place, held scoreless eight times this season. To fix that, the Crew broke the bank, acquiring Colombian international Cucho Hernandez from English side Watford on a reportedly club-record $10 million transfer fee. Hernandez could make an instant impact.

New England transferred leading scorer Adam Buksa to French club RC Lens in June, filling the vacancy at forward by acquiring Giacomo Vrioni from Juventus. Buksa scored seven of the Revs’ 29 goals this season, with only four clubs scoring more. Making sure there’s no offensive falloff now becomes key for another club that is probably better than its place in the table.

Minnesota took 3-0 leads in their last two games, winning both 3-2. While allowing the Galaxy and Real Salt Lake back in may seem problematic, it could also show a team capable of finishing off opponents. As things stand, they don’t play a team ahead of them in the Western Conference or the single table for the rest of the month.

Houston welcomed its latest addition, Hector Herrera, to the city. The Mexico international could not have come at a better time. Houston is 1-4 in its last five games and is falling further back in the Western table. They’ll need Herrera to make an instant impact as the Dynamo plays in-state rivals FC Dallas and Austin in his first two games as part of the club.

Portland’s inconsistency can be maddening, as it displayed in its last outing against Nashville. Still, leaving Geodis Park with a draw is a positive. Portland went down 2-0 on the road but kept its composure and stayed in the match. Nashville helped with some questionable defending and goalkeeping, but Portland scored two quick goals for the valuable road point. They’re now 2-0-2 over the last four games, facing a strong challenge with a rivalry match at Seattle up next.

Inter Miami is reportedly set to land Alejandro Pozuelo from Toronto FC. Pozuelo, the league’s MVP in 2020, could give Inter Miami’s offense, which has accounted for just 18 goals, a boost. Pozuelo has scored four goals and added five assists this season, which would be good for second and first on Inter Miami in each category.

Charlotte won its first game under interim coach Christian Lattanzio and most recently won its first road game, 2-1 at Houston. Sitting on 23 points, Charlotte plays some critical Eastern matchups this month, including at Inter Miami on home to Columbus, the two teams currently a point behind them.

Atlanta lost at Toronto and the Red Bulls before opening July with a 1-1 draw at Yankee Stadium. The game at the Red Bulls was telling, with Atlanta taking a late lead before giving up an 83rd minute penalty and an 89th minute goal. They’re at home against Austin FC, a team tied with the Red Bulls for the best away record in MLS. That’s the first of three consecutive home games, finishing out the month with a trip to play the Galaxy and Chicago.

After beating Seattle at home on May 22, Colorado is heading in the wrong direction. Winless since that game, the club looked solid against Austin FC on July 4, at least in the opening stages. They eventually gave up a 2-0 lead against Austin at home, losing 3-2. That followed a 3-0 loss at Portland, only the second time this season the Rapids have lost back-to-back games.

Taxi Fountas has been a bit of a revelation since bagging a brace in his first start with the club on April 23. He collected a hat trick on Monday to help DC beat Orlando 5-3 and now has nine goals, one off the league lead. DC United is still in the Eastern cellar even with the latest win. With Fountas looking like a legitimate scoring threat each and every time out, the club has some hope.

Toronto FC has turned to Italy for help with its season. First, the club signed standout attacker Lorenzo Insigne over the winter and will bring him into the fold soon. Then, the club signed Domenico Criscito, a 35-year-old defender from Genoa, to help bolster the defense. Now, rumors link them with Federico Bernardeschi, who could join on a free transfer. With games against San Jose, at Chicago, at Montreal, and Charlotte before closing out July at New England, Toronto may be a very different team this time next month.

June was an odd month for San Jose as the club played just two games, a 0-0 draw at Nashville and a 2-0 loss at Real Salt Lake. The Earthquakes started off July on the right foot, beating Chicago for its first win since May 18. The rest of the month is tricky, with road games at Toronto FC, the Galaxy, and Portland up next.

Chicago is in last place in the Eastern Conference, tied on 17 points with DC but with two extra games played. They’re a point behind 12th-place Toronto, matching their 18 games played. Anything can happen in the East, highlighted by Chicago beating Philadelphia 1-0 to close out June. They followed that up with a 2-1 loss at San Jose. Playing four out of their next five games at home should be an advantage, accounting for three of their four wins this season.

Sporting KC won one and lost three in June, the win a 2-1 result at Nashville. They also advanced in the US Open Cup, knocking out lower division side Union Omaha 6-0. This month opened with a 1-0 home loss to the Red Bulls, with Sporting playing their next three on the road where they have one win, seven losses, and two ties. They return home to play LAFC on July 23 before an Open Cup semifinal trip to play Sacramento Republic on July 27.