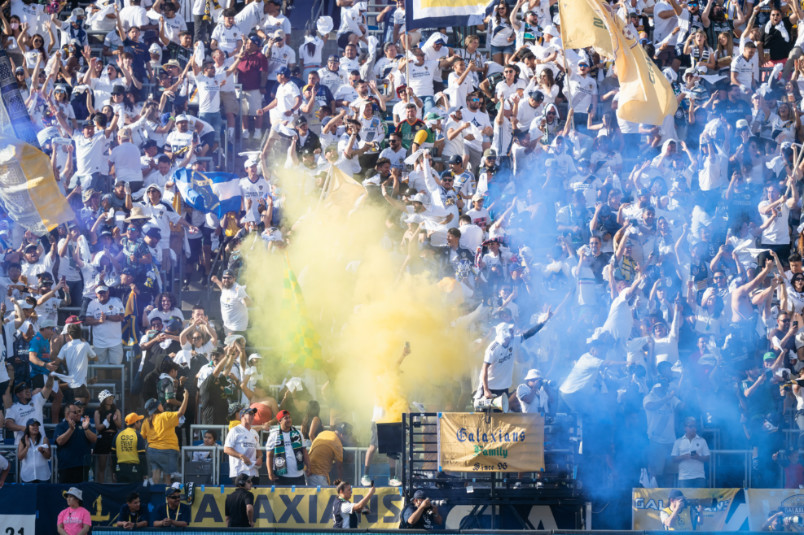 By Charles Boehm – WASHINGTON, DC (Jul 8, 2022) US Soccer Players – Few topics in MLS past or present have earned more attention and analysis than rivalries. From almost the very beginning, these matchups have helped to elevate the visibility and intensity of regular-season games and strengthen the connections between clubs and their communities. Somewhere along the line, the best of them took on a gravity of their own.

Rivalry games often draw the biggest, most spirited crowds in the stadiums and some of the best television ratings. Starting Friday and running through the following weekend, the 2022 edition of Rivalry Week features highlights on the schedule like LAFC vs LA Galaxy (July 8 – ESPN), Seattle Sounders vs Portland Timbers(July 9 – FOX), and New York Red Bulls vs New York City FC (July 17 – ESPN) that offers the combination of factors that make these games so important.

The New York and Los Angeles derbies represent a chance to connect with the two largest media markets in the United States. On a simple numbers basis, that’s a clear opportunity for any league in North America. It helps when the teams involved are competitive. El Trafico, in particular, includes some of the best-known on-field personalities. Meanwhile, the crown jewel of the Cascadia Cup is the gold standard for relevant, well-supported organizations with legitimate history, antagonism, and stadium ambiance in every head-to-head meeting.

Then there’s a few much younger yet promising regional duels in Atlanta vs Orlando (July 17), Columbus vs Cincinnati (July 17), and Minnesota vs Kansas City (July 13). Though relatively new, these games matter to their respective fan bases, who have embraced and elevated them.

Atlanta, in particular, may end up being the natural rivals of the other teams in the Southeast. Charlotte plays Nashville on July 9, but both teams are geographically closer to Atlanta. Both have already signaled that United may be their preferred natural rival.

The Five Stripes, whose startling initial achievements made them a case study, might well tell them to get in line. It’s notable that they and a few other teams basically pull double duty in this department. This is why “Rivalry Week” always winds up being more than seven days long. El Trafico may have gobbled up all the bandwidth since LAFC joined the league in 2018. But the Galaxy’s California Clasico clash with San Jose (July 13) is far older and just as bitter.

For the original MLS teams, it can be difficult to decide which rivalry gets the attention. The Red Bulls have noisy sky-blue neighbors across the Hudson River, sure. There’s also a quarter-century of history with DC United. New York playing DC for the Atlantic Cup was in many ways the early archetype for the league’s approach to rivalries. That’s not on the schedule this time, with DC opening Rivalry Week at the Philadelphia Union on Friday night. Ask Philadelphia supporters who their natural rivals are, and they may also look to the Red Bulls.

Which rivalry ends up taking prominence is also becoming a question in Texas. FC Dallas and Houston have been playing for a rivalry trophy since 2006. All three will face each other, with Houston vs Dallas on July 9, Austin vs Houston in a rare Tuesday night game (July 12 – UniMas), and Dallas vs Austin on July 16. While Austin is only in their second season, they’re putting Q2 Stadium’s strong game day atmosphere and their record up against teams behind them in the standings. Enough of that over a long enough time, and that builds rivalry.

Austin and Charlotte are both true expansion teams. There’s no lower division version or US Open Cup games against MLS competition to potentially build on. Instead, they’re actively writing their MLS stories. Whatever rivalries emerge may not be the obvious ones.

Every club in the league would surely like to have the kind of rivalry that turns into a highlight of every season’s schedule. We know that it’s not that easy or straightforward. MLS is a North American sports league with only two truly local derbies. Big games certainly help, but one season’s marquee matchup may not mean as much even a year later.

That new vs established tension is what makes rivalries difficult. The “derbies” and “clasicos” matter the most when allowed to grow organically. These things usually work best when fans take the lead.