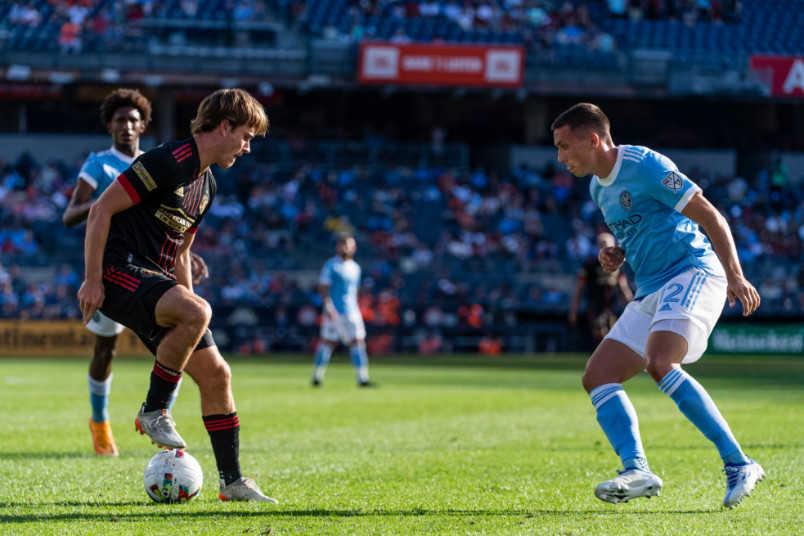 Week 18 of the 2022 Major League Soccer season started with Seattle shutting out Toronto 2-0 at BMO Field. Dylan Teves scored in the 39th and Fredy Montero made it 2-0 in the 60th minute. Sounders goalkeeper Stefan Cleveland made six saves to keep the clean sheet.

Vancouver beat LAFC 1-0 at BC Place with Adrian Cubas scored the game’s only goal in the 89th minute. LAFC finished without a shot on goal.

New England and FC Cincinnati drew 2-2 at Gillette Stadium on Sunday. Dylan Borrero scored for the Revolution in the 30th with an own-goal leveling the score in the 41st. New England’s Gustavo Bou scored in the 55th and Brenner equalized for Cincinnati in the 73rd minute.

“A hard fought point,” Cincinnati coach Pat Noonan said. “It wasn’t pretty all the time, but I was pleased with the fight of the group, going down twice and working our way back into it against a good team with some real quality going to goal. It’s a stretch of four games now, against four of the top teams in the conference, where we found ways to get results. So I’m very pleased with that.”

“We are facing the defending champions, a very good team, very solid team with a lot of experience and a good coach,” Atlanta United coach Gonzalo Pineda said. “It wasn’t an easy game. There were moments when they had control and had some minutes on top, but we were able to absorb that pressure well at times. At the end of the game, we pushed for the tie and then the victory. Credit and good statement from my team that they never quit or surrendered, and we got a point out of that.”

Columbus and Philadelphia drew 0-0 at Lower.com Field. The Crew’s Pedro Santos had a penalty saved in the 19th minute.

Minnesota beat Real Salt Lake 3-2 at home. Emanuel Reynoso put United up with goals in the 9th and three minutes into first-half stoppage time. Minnesota’s Luis Amarilla made it 3-0 in the 61st. Real Salt Lake pulled a goal back through Jefferson Savarino in the 71st with Anderson Julio scoring in the 76th minute.

Nashville and Portland drew 2-2 at GEODIS Park. Nashville took a 2-0 lead with goals from Sean Davis in the 18th and Hany Mukhtar in the 57th. The Timbers responded with a 64th minute Dairon Asprilla penalty and Jaroslaw Niezgoda scoring in the 69th.

Charlotte beat Houston 2-1 at PNC Stadium for their first road win in their debut season. Charlotte went up from a 28th minute own-goal and Andre Shinyashiki doubled the lead in the 74th. Fabrice Picault scored for the Dynamo in the 81st minute.

San Jose ended the Sunday schedule with a 2-1 home win over the Chicago Fire. Benjamin Kikanovic scored for the Earthquakes in the 47th and 87th minutes. Chicago’s Brian Gutierrez pulled a goal back five minutes into stoppage time.

“When you are on the road and you create chances like we did in the first-half, some clear chances like that, a couple of them alone with the keeper, you’ve got to put those away,” Chicago coach Ezra Hendrickson said. “When you don’t, stuff like this happens because we definitely gave ourselves opportunities to put this game out of reach in the first half and we just didn’t take them. That’s something that has been plaguing us all season. We have just 16 goals so far this season. But this game was lost in the first half, not putting them away when we had the chance to.”