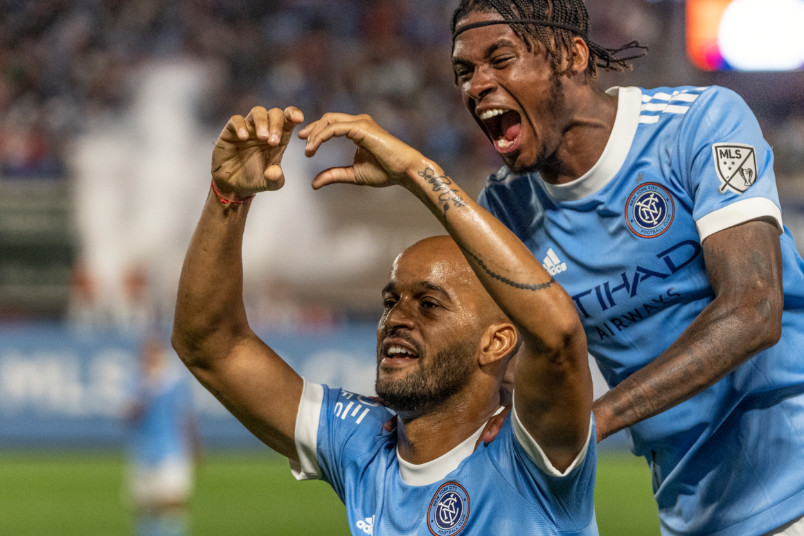 Week 22 of the 2022 Major League Soccer season started at Yankee Stadium with NYCFC beating Inter Miami 2-0. Maxi Moralez put NYCFC up in the 12th and Heber doubled the lead in the 75th. New York goalkeeper Sean Johnson made four saves to keep the clean sheet.

Philadelphia won 1-0 on the road at Orlando City with Daniel Gazdag scoring in the 39th minute. Union goalkeeper Andre Blake made one save to keep the clean sheet.

Columbus and New England drew 0-0 at Lower.com Field. Columbus finished with seven shots on target to the Revolution’s two.

Cincinnati and Nashville drew 1-1 at TQL Stadium. Teal Bunbury put Nashville up in the 6th with Brandon Vasquez equalizing in the 52nd minute.

“Right now, we just can’t put it all together,” Cincinnati coach Pat Noonan said. “Today, it was set piece defending, and that’s been an issue in the past to cost us points or it was conceding goals or scoring goals or not being able to find the goal at the right time. We’re looking at ways to try to put it all together. I do like the way the guys responded to find a goal there in the second half and to continue to push for it. I just think we lacked ideas in that final third to find the winner.”

Toronto beat Charlotte 4-0 at home. Jonathan Osorio scored in the 4th with Michael Bradley adding a goal in the 10th. Toronto’s Federico Bernardeschi scored a third goal in the 31st with Bradley scoring again in first-half stoppage time. Charlotte played a man down from the 65th after Christian Fuchs saw red.

Montreal won 2-1 at DC United with Rommell Quito scoring in the 1st and 35th minutes. United pulled a goal back through Steve Birnbaum in the 56th.

“I thought, considering the amount of games we’ve had in the period of the last three or four weeks and gone away to win in LA and gone away to win in Vancouver, come here and won away maybe we’ll get a little bit of credit for what we’ve been doing over the last few weeks,” Minnesota coach Adrian Heath said.
>p?
LAFC won 2-0 at Sporting Kansas City. Cristian Arango put LA up in the 56th and Gareth Bale scored in the 83rd minute. LAFC goalkeeper Maxime Crepeau made three saves to keep the clean sheet.

Seattle beat Colorado 2-1 at home, falling behind to a 3rd minute Jonathan Lewis goal. Jordan Morris equalized for the Sounders in the 43rd with Seattle playing a man down from the 47th after a red card to Kelyn Rowe. The Sounders’ Nicolas Lodeiro converted a 71st minute penalty.

Chicago won 3-1 at Vancouver. Xherdan Shaqiri scored for the Fire in the 13th with Lucas Cavallini equalizing for the Whitecaps in the 54th. Rafael Czichos put Chicago up for good in the 76th and Chris Mueller scored in the 90th minute.

“Well, it’s a very big win for us, probably one of the bigger wins that we’ve had this year,” Chicago coach Ezra Hendrickson said. “We just wanted to be consistent and continue with this momentum that we built at home, and the boys came out tonight and did just that.”

Portland closed out the Saturday schedule with a 2-1 home win over San Jose. Falling behind to a 42nd minute Benji Kikanovic goal, Jaroslaw Niezgoda scored for the Timbers in the 53rd minute. Dairon Asprilla scored Portland’s winner in the 71st.

On Sunday, the Red Bulls won 4-3 at Austin. Serge Ngoma opened the scoring for New York in the 14th and Dru Yearwood made it 2-0 in the 26th. Austin pulled a goal back through Sebastian Driussi in the 45th. A Cameron Harper goal in the 51st made it 3-1 Red Bulls and Tom Barlow added a fourth goal in the 65th. Driussi scored for Austin in the 69th and Ethan Finlay pulled them within a goal in the 81st minute.

Week 22 ended in Carson with the LA Galaxy beating Atlanta 2-0. Kevin Cabral scored in the 7th minute and Dejan Jovelic made it 2-0 five minutes into stoppage time.