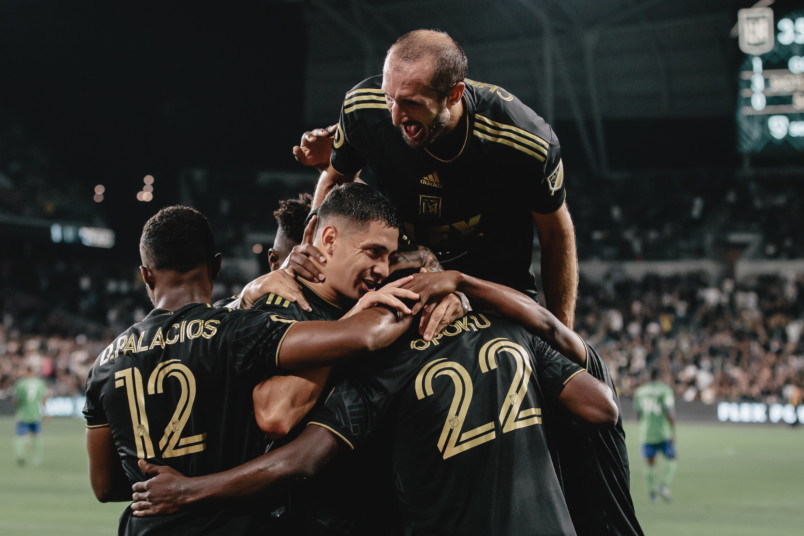 The roundup of Week 23 in Major League Soccer starts with LAFC beating Seattle 3-1 at home on Friday. The Sounders took a 14th minute lead from an own-goal with LAFC’s Kwado Opoku equalizing in the 35th. Carlos Vela scored for LAFC in the 43rd minute.

On Saturday, Minnesota and Portland drew 4-4 at Allianz Field. Sebastian Blanco put the Timbers up in the opening minute. Minnesota’s Franco Fragapane equalized in the 9th and Bongokuhle Hlongwane gave them the lead in the 21st. Luis Amarilla made it 3-1 United in the 41st minute. Portland responded with another goal from Blanco in the 50th and Jaroslaw Niezgoda equalizing in the 53rd. The Timbers took the lead from a 65th minute own-goal with Amarilla equalizing for Minnesota in the 69th.

Chicago and Atlanta finished 0-0 at Soldier Field. The Fire put three of its 15 shots on target to Atlanta’s two from 13.

“It’s never good enough,” Atlanta coach Gonzalo Pineda said when asked about splitting the points. “I felt that with the way we’ve been playing many games, again that we deserve a little bit more. Obviously, we always want to win. Now, with the situation, we’re coming here after a loss, a very, very bad loss in my opinion, the last one. We needed to not lose. We needed to just be stable, solid. I think the performance was very positive. This point can build something again.”

Montreal and NYCFC finished 0-0 at Stade Saputo with Montreal putting one shot on goal to none for New York.

Philadelphia shutout Houston 6-0 at home. Daniel Gazdag opened the scoring in the 23rd and Jack McGlynn made it 2-0 in the 42nd. Mikkel Uhre added goals in first-half stoppage time and the 48th. The Union’s Julian Carranza (55th) and Quinn Sullivan (89th) finished off the scoring. Philadelphia goalkeeper Andre Blake made one save to keep the clean sheet.

“This is a difficult one to swallow, but bottom line we lost to a better team,” Houston coach Paulo Nagamura said. “Credit to Philadelphia. We were not good on the day, but in all aspects the Union was better than us. Defensively, offensively. All I can say after this game, we have to apologize to the fans and make sure this will not happen again.”

Inter Miami and FC Cincinnati finished 4-4 at DRV PNK Stadium. Miami’s Gonzalo Higuain scored in the 23rd with Cincinnati’s Brenner equalizing in the 28th. Higuain put Inter up in the 37th and scored again five minutes into stoppage time. FC Cincinnati responded with another gaol from Brenner in the 40th and Brandon Vasquez scoring in the 81st and 86th minutes. Inter Miami’s Christopher McVey equalized seven minutes into stoppage time.

“Feels like a loss to us,” Cincinnati forward Brandon Vazquez said. “I mean, we had the three points in the bag, and we just let them go. But we take the positives out of this game, I think we put in a good shift on the road. Being down and coming back and getting the lead and knowing that we can fight all the way through 90 minutes and score four goals. I think that’s so positive we take out of this game tonight.”

Nashville and Vancouver drew 1-1 at GEODIS Park. Teal Bunbury gave Nashville the lead in the 17th with Javain Brown equalizing for the Whitecaps in the 87th minute.

The New England Revolution and Toronto FC finished 0-0 at Gillette Stadium with Revolution goalkeeper Djordge Petrovic saving an 81st minute penalty. Toronto put three of its 15 shots on goal to the Revolution’s two from 13.

“Yeah, probably didn’t have that many chances, might have had the best one in the game at the end,” New England coach Bruce Arena said. “We’re missing a couple players and that doesn’t help us. I think it’s a fair result. I don’t think it was a penalty and give Djordje a lot of credit, great save on the penalty kick.”

Charlotte and Columbus will be rescheduled due to weather.