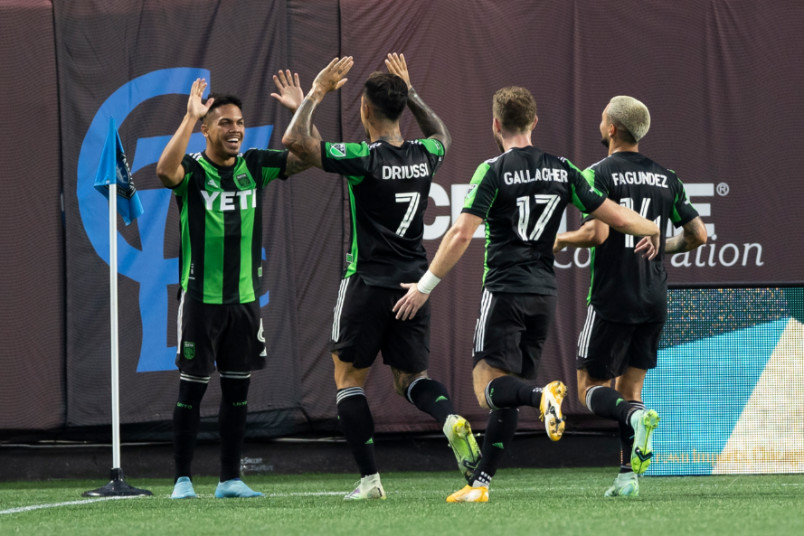 By Jason Davis – WASHINGTON, DC (July 6, 2022) US Soccer Players – Halfway through the 2022 Major League Soccer season, the Supporters Shield race is starting to take shape. There’s a favorite, but there’s also a deep field of contenders, ready to make a move and upend the single table.

LAFC holds that top spot with 36 points from 18 matches, making it the only team in the league with a two points-per-game average. In his first season in charge, Steve Cherundolo has expertly navigated the move to the sideline in Los Angeles. Offseason acquisitions, perhaps none more important than goalkeeper Maxime Crepeau, bolstered a team that missed the playoffs in 2021. LAFC should only get stronger from here. Giorgio Chiellini and Gareth Bale will debut this month, waiting in the wings to make a second-half impact for their new club.

It’s important to consider the schedule when talking about LAFC’s chances of claiming the club’s second Supporters’ Shield. Half of their remaining sixteen games are at home, including a run of three straight at Banc of California Stadium in August. Some difficult matches remain, including home dates against Seattle, Dallas, and RSL and away matches against Austin and Nashville. However, the schedule doesn’t read as too difficult for a squad with as much quality as LAFC’s.

Notably, LAFC has just two games left against Eastern Conference opponents, meaning 14 of the last 16 games will come against teams chasing them in the Western Conference standings. So there should be several proverbial six-pointers down the stretch of the campaign.

LAFC’s margin is just two points going into this weekend’s games. There are three teams within six points of the top spot and three more within seven. It’s a list that starts with Austin and then shifts to four Eastern Conference teams.

Austin has only lost once at home, but it’s their six road wins helping them chase LAFC at the top of the Western Conference. Over their last four games, three were road wins at Montreal, Charlotte, and most recently, Colorado. Austin trailed by two goals in that one, holding the lead while playing the final 15 minutes a man down.

Road wins are also the story at the top of the Eastern Conference. Right now, it’s the Red Bulls holding a slim advantage for first in the East. New York’s 32 points put them third in the Supporters Shield standings, two points behind Austin. Like Austin, the Red Bulls have a better record on the road. With 19 games played, the Red Bulls have collected 21 of their 32 points away from home, matching Austin’s six road wins, three losses, and one draw.

In a league known for its significant home-field advantage, Austin in the West and New York in the East are upending that perception.

New York doesn’t have any second-half additions lined up to give the team an extra boost in the Shield chase. While signings are still possible as long as the window is open, it seems likely that the Red Bulls will rely on the group it has. They’re a pressing club, carrying that high-intensity philosophy into the heat of summer. New York has eight games left at home and seven remaining on the road.

The Red Bulls’ rivals across the river, NYCFC, collected two points from a possible 12, in theory, well off the pace. NYCFC still has two things working in their favor, the best points-per-game average in the East, thanks to a difference in games played, and the second-highest goal difference in the league at +14. While possible outgoing transfers could complicate NYCFC’s quest for the Supporters’ Shield, there’s no question the club has the talent to put together a run.

There are a few other clubs with reasonable claims to a Shield challenge, Real Salt Lake and Montreal among them. The table is so close and schedule-dependent, it’s tough to see a clear advantage. It might be Philadelphia from that collection that looks most capable.

An underwhelming May and June let other clubs in the East pass the Union for 1st-place. Philadelphia is always defensively sound, but not putting games away saw the Union rack up the draws over that span. Four wins at home, no losses, and five draws is a different spin on home-field advantage, with the Union winning three away, losing two, and drawing four. Still, they’re in 2nd-place in the East and 4th in the single table, trailing the Red Bulls by two points with the same +9 goal difference.

That’s the issue with finding a favorite for the Supporters’ Shield. While the Eastern Conference contenders taking points off of each other might open the door for the top teams in the West, it’s hard to believe that anything this season will turn out to be that simple.