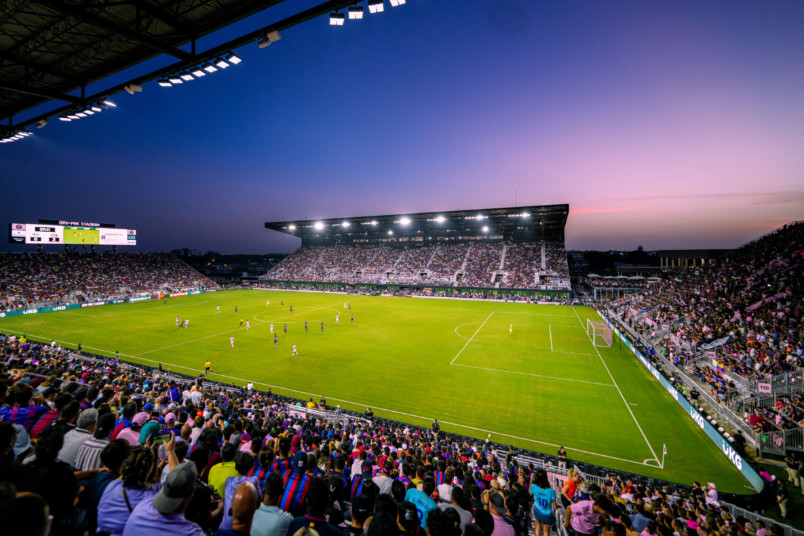 Wednesday’s soccer news starts with Christian Ramirez scoring for Aberdeen in their 5-0 win at Stirling Albion in the Scottish League Cup, group A. Vicente Besuijen put Aberdeen up in the 11th minute with Ramirez making it 2-0 in the 24th. Aberdeen’s Matty Kennedy scored in the 31st and Ross McCrorie added a goal in the 41st. Besuijen scored again in the 43rd minute.

“There was some good movement at the top end, guys making great runs, and we’ve concentrated on that in training,” Aberdeen manager Jim Goodwin said. “We’ve not spent a lot of time on defensive shape because of the nature of the opposition and how we felt things would pan out. We’ll be working on defensive transitions a bit more ahead of Sunday and then ahead of Celtic because obviously the level of opposition in the league is very different.”

Sergino Dest played the first-half of Barcelona’s 6-0 friendly win at Inter Miami, with Barca subbing out the lineup for the second-half. DeAndre Yedlin played the first-half for Inter. Pierre-Emerick Aubameyang put Barca up in the 19th minute and Raphina doubling the lead in the 25th. Ansu Fati made it 3-0 in the 41st and Gavi scored in the 55th. Goals from Memphis Depay (69th), and Ousmane Dembele (70th) finished off the scoring.

“They just play really well together,” Yedlin said. “Their movements are pretty hard to track. They can mix up teams a little bit defensively. And then, obviously, there’s world-class players. So when you have that many world-class players on the pitch at one time, it’s always going to be difficult.”

Romain Gall wasn’t in the squad for Malmo’s 1-0 loss at Zalgiris Vilnius in the second round of 2022-23 UEFA Champions League qualifying. Zalgiris scored in the 49th minute, putting five shots on target to Malmo’s two.

USMNT player Nicholas Gioacchini is now a member of Orlando City. “(Playing in MLS is) one of the parts I’m most excited about,” Gioacchini said in the press statement announcing the move. “Coming home, that feeling of coming back to my home country and getting the experience to play against the rising MLS and being a part of it. That’s a great feeling.”

ESPN’s Tor-Kristian Karlsen on the importance of new signing Kalidou Koulibaly for Chelsea. The Athletic’s Stuart James explains what changing the back-pass rule did for soccer.

ESPN Deportes has the Athletic vs Bochum friendly at 12pm. The Udinese vs Bayer Leverkusen friendly is on Fox Deportes at 12pm. UEFA Women’s Euros on ESPN2: Germany vs Austria at 3pm. Copa America Femenina on FS1: Brazil vs Peru at 8pm and FS2: Venezuela vs Argentina at 8pm ET.