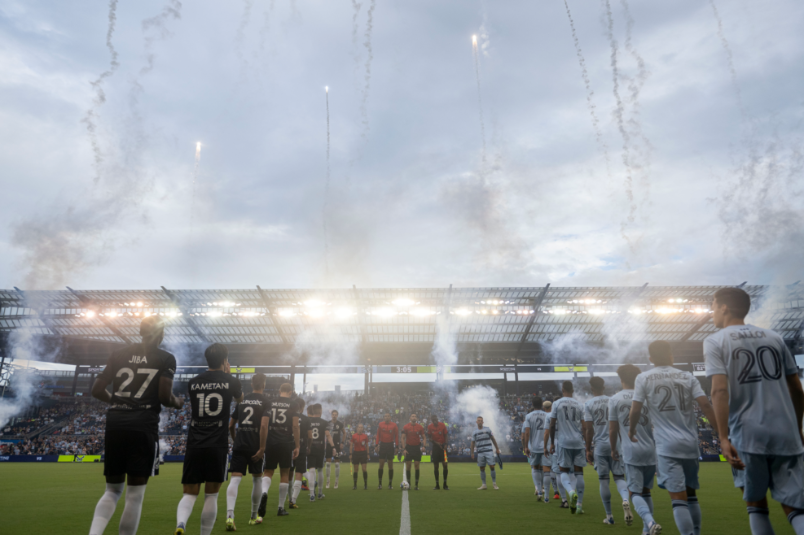 By Clemente Lisi – NEW YORK, NY (Jul 11, 2022) US Soccer Players – Sporting Kansas City and its fans have experienced an interesting few months, about more than Sporting’s position in the Western Conference table. The recent announcement that Arrowhead Stadium would be one of 11 US venues to host games at the 2026 World Cup was an indication that Kansas City is now a world-class soccer market. That’s a testament to the fans and the Sporting Kansas City organization for all the work they have done over the years.

“The World Cup will bring unprecedented tourism and economic activity to our community and will provide an opportunity to showcase our city on a global stage,” Sporting Kansas City investor/operator Cliff Illig said. “We are excited for Kansas City to proudly welcome the world for the 2026 FIFA World Cup.”

The bid’s motto, “In the middle of everything”, was meant to denote both the city’s location and its burgeoning soccer pedigree. Kansas City is the only host city located in the Midwest after bids from other soccer hotbeds such as Nashville and Cincinnati failed to make the final list.

While that points to exciting times for the city, right now Sporting KC is in search of league form. The team is in 13th-place in the highly-competitive Western Conference standings with the second-lowest points-per-game average in the league at 0.95. While the league is a problem, they’ve also advanced to the semifinals of the US Open Cup. Injuries have hampered coach Peter Vermes’s team from the start, but some recent performances indicate that this is a team that still has some fight left in them. They retain the lauded work ethic that has made them both successful and fun to watch since Vermes took the job in 2009.

“I think that fact that we have had some consistency in the group out on the field,” Vermes said after Sporting knocked Union Omaha out of the Open Cup on June 22, “and we’re getting guys back – maybe they’re not all 100% fit – but maybe getting those guys back who understand our identity, having them out on the field and that consistency, it lends itself to playing who we are.”

During a recent interview with the Kansas City Star, Illig tried to quell speculation that the team’s ownership was looking for a change in direction. “You know, I don’t read much of it, but people tell me how the social media stuff says I’m getting rid of Peter. Ain’t gonna happen.”

Illig added that he’s “not panicked or anything” by the team’s place in the standings or how they’re playing. “We need to get through it,” he said. “And I think we’ll come through a lot stronger than we were before.”

As the league enters its midway point, Sporting KC hopes it can pull off some upsets. Still, the numbers look grim. Heading into Saturday’s game at Montreal CF, Sporting Kansas City had just 16 points from 19 games with just four wins.

Part of the reason is that Designated Players like midfielder Gadi Kinda and striker Alan Pulido both suffered season-ending injuries. In addition, other injuries this year to midfielder Ozzie Cisneros and a series of National Team call-ups left Vermes with less options. Like many MLS teams, Sporting KC has leaned on youth and Homegrown Players to help get them past the disappointing results.

That might have started on Saturday night against Montreal at Stade Saputo. Sporting pulled off a shock 2-1 win against a Montreal side that was recently top of the Eastern Conference and is currently in 4th-place. A goal by midfielder Remi Walter in the 63rd minute turned out to be the game-winner, giving some much-needed confidence to Sporting.

The come-from-behind victory, which included a first-half, 40-yard chip-shot goal by Roger Espinoza, is the start of a crucial nine-day, three-game road swing that includes matches against Minnesota on Wednesday and Real Salt Lake this coming Sunday.

“I think we played really well, outside of their goal. We weren’t as good on the ball in the first-half,” Vermes told reporters following the Montreal win. “In the second-half, we were actually much better with the ball and we opened them up quite a bit….”

Vermes said the winning goal is the type of play “you work on” during the week. “The guys really have to bust it to create an opportunity like that,” he added. “To be disciplined defensively and not lose ourselves in the game, and to not panic after going down 1-0, that was a positive.”