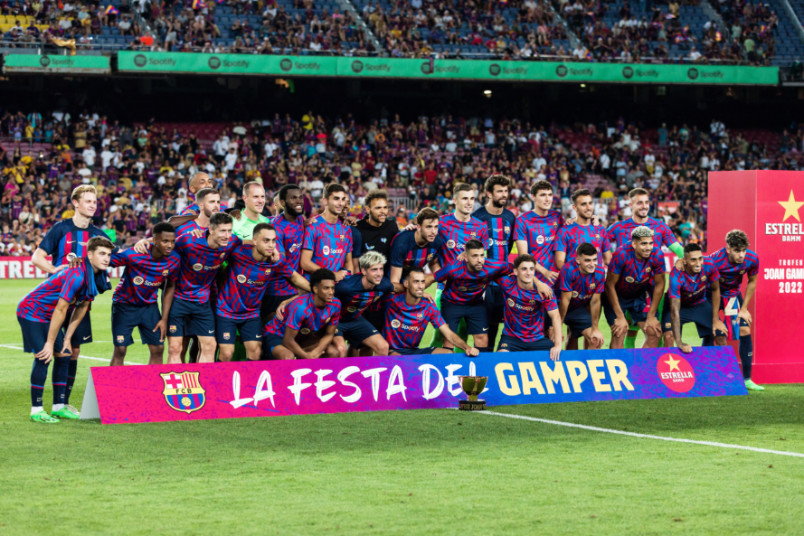 By Jason Davis – WASHINGTON, DC (Aug 12, 2022) US Soccer Players – England, Germany, and France got their 2022-23 seasons started last weekend as the top leagues of European soccer emerged from a short summer hiatus. Fans and pundits alike are already forming early opinions about the new campaigns. Patience isn’t a virtue soccer fans tend to possess. No one wants to wait for a critical mass of data before jumping to conclusions. No doubt La Liga fans are buzzing with anxious excitement for their chance to get in on the fun.

Spain’s new season kicks off this weekend, and there’s no lack of intrigue. While the usual suspects expect to compete for the league title, the drama following Barcelona into the new year has added extra juice to the start of the season. How can we handicap La Liga or reasonably guess at how Barcelona’s season might go when we aren’t sure who is eligible to play for the club?

While Barcelona attempts to sort out its financial problems to register the new signings made in the summer, the focus for USMNT fans is once again on Sergino Dest. He seems ready to step forward as a contributor to Barcelona’s new project. Coach Xavi Hernandez has praised Dest’s talents during Barcelona’s preseason, while at the same acknowledging that Dest is a young player still growing into his abilities.

Barcelona’s chief rival for top honors every La Liga season is, of course, Real Madrid, a prohibitive favorite this season despite rarely repeating as champions of Spain in the last three decades. The club is regularly in the discussion for multiple trophies, but last year’s domestic success and Champions League title came as a mild surprise. With Diego Simeone’s Atletico Madrid also ready to challenge, the title chase should come down to the group of Barcelona, Real Madrid, and Atletico.

Right now, Barcelona’s financial and registration travails will grab the most headlines. Atletico Madrid’s quest to close the gap at the top will get its fair share. Real Madrid remains a club with immense gravity. But there’s plenty of intrigue down the ranks of La Liga, where the competition is on to claim a spot in Europe, avoid relegation, and achieve more than last year.

There are two other US internationals in Spain in addition to Dest. Midfielder Yunus Musah returns ready to grab a bigger role in Valencia’s midfield, while Luca de la Torre joins Celta Vigo for his first season in La Liga after moving from Heracles in the Netherlands.

Both teams finished in the middle of the pack last season, with Valencia in 9th and Celta Vigo in 11th-place. Valencia went through a summer of change, with Italian coach Gennaro Gattuso now installed on the sideline.

It’s tough to pin down Valencia’s prospects for the new campaign. Gattuso is new to La Liga but coached Milan and Napoli, and Valencia didn’t make any significant additions to the roster. Musah’s role is almost certain to grow, and Gattuso used the preseason to move the American to the center of the field.

That’s a departure from Musah’s first two seasons in Valencia’s senior team when he most often manned wide areas. It’s also more in line with his position with the USMNT, where head coach Gregg Berhalter asks Musah to contribute on both sides of the ball in a trio of central midfielders. Valencia fans expect more than a 9th-place finish. Gattuso and Musah will play massive parts in whether the club can deliver what they want.

Celta Vigo’s midtable finish and busy transfer window have de la Torre’s new team ready to make a move up in Spain. His jump from the Eredivisie to La Liga represents a real step up in difficulty, but far in his career, the San Diego native has shown a knack for making the right move to advance his soccer.

De la Torre rose to the occasion at Heracles, where he stood out as one of the club’s best performers in a season that ended with relegation. Celta’s investment in de la Torre suggests the Spanish club has faith that his talents, honed in a league known for developing top young players, can translate to a higher level. The move also makes La Liga more interesting for Americans anxious to see their compatriots thrive in a league that is not often home to much of an American presence.

The league holds potential surprises up and down the table. American soccer fans looking for another story connected to the game in the United States to follow might be intrigued to see how 2021 MLS Golden Boot winner Valentin Castellanos gets along at newly promoted Girona. The club is part of the City Football Group network of teams and will hope to make waves in the top division.

The second tier of Spanish clubs, teams not usually good enough to challenge Barcelona and Real Madrid but good enough to rank among the best in Europe behind that duopoly, make La Liga both top-heavy and possibly the best league in the world from top to bottom. La Liga’s reputation as home to technical and intricate play also helps it to stand out from its rivals. With US soccer players in intriguing spots ready to step into the limelight, the new La Liga season is here.