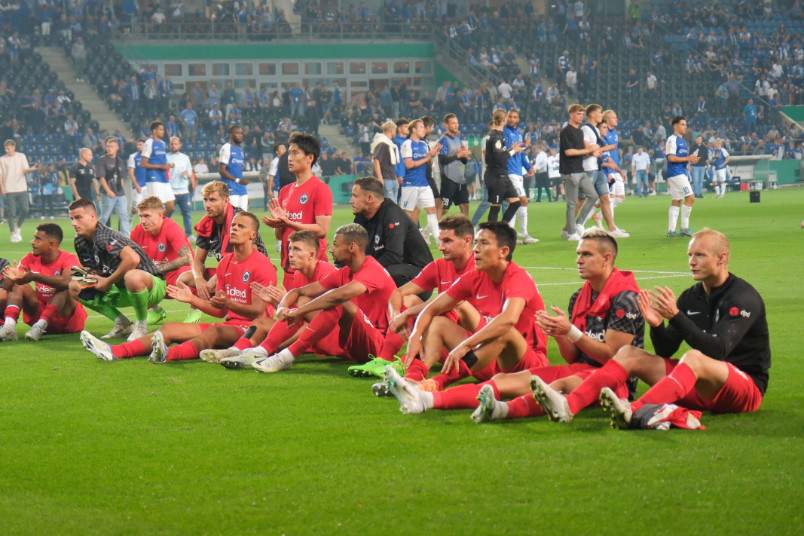 Tuesday’s soccer news starts with Jordan Pefok scoring in Union Berlin’s 2-1 win at Chemnitzer in the DFB Pokal. Trailing from the 62nd minute, Pefok equalized in the 64th to force extra time. Union Berlin’s Kevin Behrens scored in the 114th minute with Pefok subbing out in the 105th.

Timmy Chandler subbed on in the 67th minute of Eintracht’s 4-0 win at Magdeburg. Daichi Kamada put Eintracht up in the 4th minute with Magdeburg failing to convert a penalty in the 7th. Jesper Lindstrom made it 2-0 Eintracht in the 31st and Kamada scored their third goal in the 59th. Lucas Alario finished off the scoring in the 90th minute.

“We scored very nice goals,” Eintracht coach Oliver Glasner said. “It was important that Kevin prevented the equaliser from the penalty. We did a lot of things well, but it’s about little details which Bayern Munich or Real Madrid will ruthlessly exploit. The boys took the game 100 per cent seriously, which was perfectly illustrated by how they celebrated Kevin Trapp’s penalty save. That shows our spirit.”

Union Berlin and Eintracht join Ricardo Pepi’s Augsburg, George Bello’s Arminia Bielefeld, Gio Reyna’s Borussia Dortmund and Joe Scally’s Gladbach in the next round with the draw set for September 4 and the games on October 18-19.

Also in the soccer news, the midweek MLS schedule begins later tonight with Seattle looking for a turnaround against FC Dallas. “They played a game Saturday, they play Tuesday, they’ve got a big match on Saturday again,” Seattle coach Brian Schmetzer said on Monday. “We don’t know their lineup. It’s a good possession-based team. Nico does a great job. They can hurt you.”

The 9th-place Sounders lost 2-1 at LAFC last Friday, with one win and four losses over their last five games. Their 29 points has them two points behind 7th-place Portland but with a game in hand over all of the playoff teams except for 1st-place LAFC.

Tied on points with 3rd-place Minnesota and nine points behind 2nd-place Austin, FC Dallas has consecutive wins over Real Salt Lake and the LA Galaxy. That’s part of a three-game undefeated streak that started with a 1-1 home draw with Austin on July 16.

“We are at a point of the season where everything is becoming more equal and fair,” Dallas coach Nico Estevez said following the win over the Galaxy. “No one is able to win easily and there tends to be more ties. Defensively in these two games keeping the shutout was key while also creating scoring opportunities. We will continue like this going forward, this is the type of mentalities playoff caliber teams have. Nothing will ever be pretty and perfect. We know where we want to be at the end of the season and this is just one step of the route we have to get there.”

Copa Sudamericana on beIN Sport: Sao Paulo vs Ceara at 6:15pm. Copa Libertadores on beIN Sport: Atletico Mineiro vs Palmeiras at 8:30pm. beIN en Espanol has Velez Sarsfield vs Talleres Cordoba at 8:30pm. Liga MX on FS1: Juarez vs San Luis at 8pm. Leagues Cup on ESPN: Chivas vs LA Galaxy at 8:30pm and LAFC vs Club America at 11:15pm.

Photo by Imago via ZUMA – ISIPhotos.com