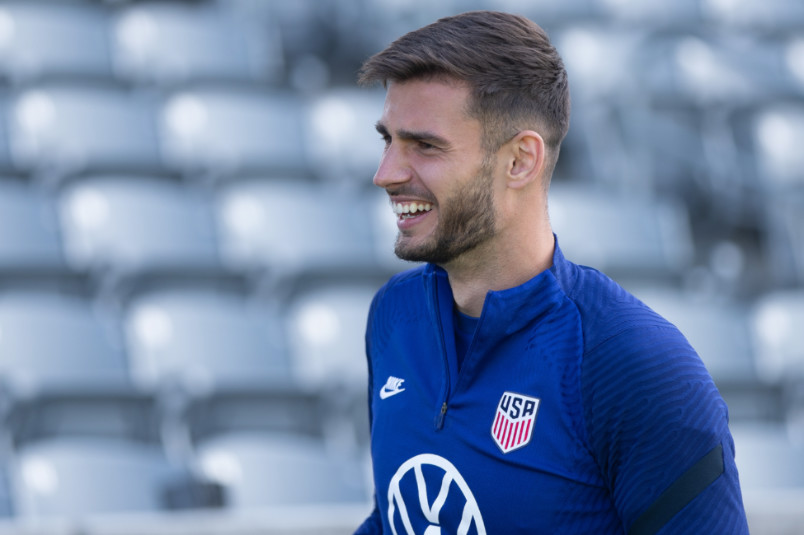 Friday’s soccer news starts with Europa Conference League third round qualifying first-legs and Kenny Saief subbing out in the 77th minute of Neftchi’s 2-1 home win over Rapid Vienna in the main path. Ataa Jaber opened the scoring for Neftchi in the 44th and Saief doubled the lead in the 60th. Rapid Vienna pulled a goal back five minutes into stoppage time. Sam Vines’s Royal Antwerp won 3-1 at Lillestrom. Dinis Almeida scored for Antwerp in the 5th minute with Lillestrom equalizing in first-half stoppage time. Antwerp’s Radja Nainggolan scored in the 50th and 86th minutes.

Moving to Europa League third round qualifying, Romain Gall wasn’t in the squad for Malmo’s 3-0 home win over Dudelang in the champions path. Malmo went a man up in the 31st with Isaac Thelin scoring in the 54th. Ola Toivonen made it 2-0 in the 81st and Veljko Biermancevic finished off the scoring in the 85th.

In MLS news, USMNT defender Matt Miazga is now a member of FC Cincinnati. “I’m really excited to join FC Cincinnati,” Miazga said in a press statement. “It’s a pleasure to be back in the United States and be able to compete in MLS again. The project here in Cincinnati is something that has drawn me here, and I want to say a special thank you to Jeff Berding, Chris Albright and Pat Noonan, who were all a big part of me coming to FCC. I can’t wait to meet all the amazing supporters, who I’ve heard so many good things about, at TQL stadium.”

No soccer news yesterday, so we’re catching up with midweek MLS starting with Charlotte FC shutting out DC United 3-0 at home. An own-goal put Charlotte up in the 13th minute with Karol Swiderski doubling the lead in the 64th. Charlotte’s Quinn McNeill finished off the scoring in the 67th and goalkeeper Kritsijan Kahlina made one save to keep the clean sheet.

The LA Galaxy beat Chivas 2-0 at home in a friendly at SoFi Stadium. Dejan Jovelic scored in the 28th and Jonathan Perez doubled the lead in the 62nd. LAFC played Club America in the late game at SoFi Stadium, finishing 0-0 at Banc of California Stadium. LAFC finished with three shots on goal to Club America’s five.

“It was a high intensity game, it was fun, it was good, and it’s exactly how we want to play,” LAFC coach Steve Cherundolo said. “So this furthers our endeavor and keeps us closer to our game model, which I was happy with.”

In the soccer news, The Cincinnati Enquirer’s Pat Brennan on Miazga at Cincinnati. SI’s Brian Straus explains what the Premier League means for the USMNT this season. DW’s Andreas Sten-Ziemons’s Bundesliga preview. The NY Times’ Rory Smith takes a broader look at the European soccer seasons.

Saturday has the Premier League on USA: Everton vs Chelsea at 12:30pm. Ligue 1 on beIN Sport: Strasbourg vs Monaco at 11am and Clermont vs PSG at 3pm. Bundesliga on ABC: Borussia Dortmund vs Bayer Leverkusen at 12:30pm. Primeira Liga on GolTV: Estoril vs Famalicao at 1pm and Porto vs Maritimo at 3:30pm. MLS on ABC: Atlanta vs Seattle at 3pm. Real Salt Lake vs LAFC is on UniMas at 10pm. Liga MX on FS1: Monterrey vs Leon at 8pm and Santos Laguna vs Cruz Azul at 10pm.

Sunday has Ligue 1 on beIN Sport: Toulouse vs Nice at 7am, Lille vs Auxerre at 9am, Rennes vs Lorient at 11am, and Marseille vs Reims at 2:45pm. Primeira Liga on GolTV: Braga vs Sporting at 1pm. TUDN has the Barcelona vs UNAM Pumas friendly at 2pm. Liga MX on TUDN: San Luis vs Necaxa at 5pm. UniMas has Pachuca vs Tigres at 7pm. Club America vs Juarez is on Univision at 9pm.

Monday has the Super Lig on beIN Sport: Fenerbahce vs Umraniyespor at 2:45pm. Primeira Liga on GolTV: Gil Vicente vs Pacos de Ferreira at 3:15pm. All Times Eastern

Photo by Imago via ZUMA – ISIPhotos.com