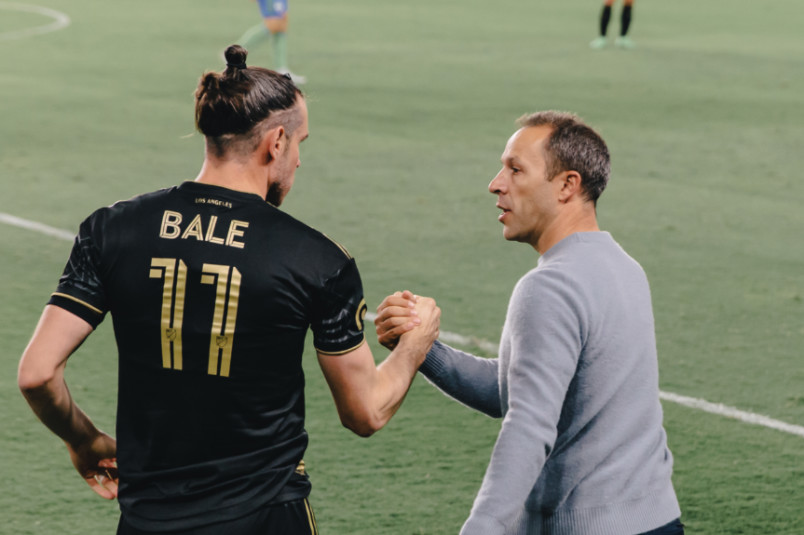 By Luis Bueno – RIVERSIDE, CA (Aug 3, 2022) US Soccer Players – With just under three months remaining in the regular season, each conference seems to have made things easier for anybody putting together a power ranking. LAFC stays in place and Philadelphia replaces the Red Bulls in 2nd, with no clear conference advantage in our top ten.

Since Giorgio Chiellini and Gareth Bale officially joined the club, LAFC is 4-0. The scary part is that Bale has appeared as a substitute in three matches, and Chiellini has yet to log a 90-minute outing. LAFC’s ceiling thus seems to be limitless right now.

The Union is just a scary club right now. They’re on a five-game winning streak, outscoring its opponents 18 to 2. If it weren’t for LAFC, the Union would be the clear frontrunners for MLS Cup.

NYCFC got back to its tough defending ways the last half of July as the club enters August having shut out four consecutive opponents. NYCFC found success with its suffocating defense early in the season and appears to have gotten past some potential difficulties. Unfortunately, NYCFC does not play the Union again during the regular season to see what team’s strength wins out.

For as good as Austin FC has been this season, the club throws in questions every now and again. Last month’s poor showing was the 4-3 home loss to the Red Bulls. Austin bounced back the very next match, heading to Sporting KC and polishing off the club in a workmanlike manner.

Defense had been a bit of a strength for the Red Bulls – five goals allowed in six games heading into July 24 – but since then the club’s been different. New York survived a 4-3 outing at Austin but then was on the wrong end of a wild 5-4 loss to Colorado where it blew a 3-1 lead. New York won’t overcome a poor defense if it has hopes of making an MLS Cup run.

Montreal isn’t going anywhere. The club shook off a bad loss to the LA Galaxy to open July and closed out the month with a solid stretch – two wins against Eastern foes Toronto and DC and a point against NYCFC. Romell Quioto has scored three of Montreal’s last five goals and seems poised to carry the team down the stretch.

FC Dallas has transitioned into a team that gives away very little defensively and engages in low-scoring matches. Sometimes it works in their favor, and sometimes it doesn’t. FC Dallas had a pair of 1-0 wins last month against RSL and the LA Galaxy but fell by the same score against Seattle to open August. The team could use a bit more offense, though, to maintain its spot in the West’s top four.

It wasn’t that Real Salt Lake was on another planet but July did seem to bring the club back down to Earth a bit. RSL went 1-3-2 in July and slipped to 5th in the Western table. RSL gets LAFC and Seattle to start off August, so the club will have to shake off whatever is troubling it quickly lest the slide continue.

Minnesota and Portland engaged in one of the most entertaining matches of the year in a spirited 4-4 draw to close out July. Minnesota’s defense needs to show that giving up four goals was an aberration. They’ve otherwise been solid, with three goals allowed over the four league games leading up to the home draw with the Timbers.

Seattle had a prime opportunity to shoot up the table and really cement its place among the top contenders in the Western Conference. The club stumbled last month with a 2-4-0 record. Complicating matters was that three of those losses came against Western rivals. Opening August with a win against FC Dallas was a positive sign.

An excess of home games hasn’t really resulted in a points haul for Nashville. The club had four home games in July and took five points from them. Nashville has four more home games in August but needs more than five points out of GEODIS Park this month to stay in the tight playoff race.

Cacho Hernandez hit the ground running with the Crew, bagging a match-winner in his first appearance, scoring both in a 2-2 draw against DC, and another game-winner against FC Cincinnati. He’s brought the club a much-needed attacking piece, and results should continue to come.

The Timbers have been involved in some crazy back-and-forth games this season, so the 4-4 draw at Minnesota wasn’t too out of the norm. The better result for the club was the 3-0 win at Seattle on July 9, showing what they can do with an offense that has scored at least twice over their last six games.

Orlando reached the US Open Cup final, but league play has gone differently. They won just once in six league games last month, and the team is now solidly in 5th-place, six points back of the top contenders in the East.

FC Cincinnati was down 3-2 late at Inter Miami to close out July, but scored two goals and looked like a win was coming. Instead, Inter scored a late equalizer, and FC Cincinnati settled for a point. The old FC Cincinnati, though, would not have come back at all, so this was a small setback for this playoff contender.

Wins against Montreal and Atlanta last month were fine, but the Galaxy’s defensive struggles are real and the attack disappears for stretches of games. Addressing that has been an ongoing project, but after a midweek Leagues Cup game to open the month, the August schedule may help.

A promising start to July with a 1-0 win over LAFC was not a precursor. Vancouver picked up just three more points over the next five matches and has slipped outside the playoff picture. Vancouver doesn’t play any of the top four Western clubs in August, so it has a chance to get back into the race.

The Revs haven’t won since June 19, drawing four and losing two. In fairness, those losses came at NYCFC and Philadelphia but drawing against Vancouver, Cincinnati, Columbus, and Toronto may highlight a team that needs answers as they try to move into the playoff spots in the East.

Inter Miami showed quite a bit of determination in its 4-4 draw against FC Cincinnati, which featured an equalizer in the seventh minute of second-half stoppage time. Early August will be critical as Inter tries to get back into the playoff hunt.

If Charlotte is to be the surprise team of the season, the club needs to take advantage of August’s schedule. Charlotte will play four home games, and only one of those teams – Orlando – enters the month in a playoff position. Road games against NYCFC and LAFC are brutal, but the club could still hit September higher up the table.

What the Fire turned into last month is a team on a three-match win streak and unbeaten in its last four. Chicago is in the throes of the playoff race now, within three points of fifth-place Orlando. Once again, big games loom at Philadelphia on August 13 and hosting NYCFC the following Sunday.

A win at San Jose on July 17 broke up a four-game winless streak with three of those losses, but Houston’s 6-0 loss at Philadelphia is asking a lot to simply set aside while focusing on the next game. That’s at Vancouver, with the Dynamo on the road for three of their next four.

Colorado is doing just enough to stay within sight of the playoff picture in the West. August’s first result was encouraging, a come-from-behind 5-4 win at New York, but the team’s inconsistency is ultimately costing it. At least their home form is encouraging with six of their seven wins, since they play three out of their next four in Commerce.

San Jose is nothing if not entertaining, playing close game after close game. Consider: since May 1, San Jose has been involved in one game decided by more than one goal. San Jose is competitive in each and every game, and for where this team was over the last few years, that is progress.

Four points back of the seventh spot and a playoff position, Atlanta had just one win last month and has won just once since June 19. Still, and perhaps showing how tough the Eastern Conference really is, their three draws in July came at NYCFC, home to Orlando, and at Chicago.

It wasn’t an easy month for Toronto, but the club’s Italian reinforcements arrived and showed what might be possible. Federico Bernardeschi had a goal and Lorenzo Insigne had an assist in a 4-0 win over Charlotte before drawing 0-0 at New England.

After DC United ended a winless run with stoppage time goals against Orlando City, it’s easy to see good things for the club under new coach Wayne Rooney. While they’re not the only team on this list looking at a tough schedule, they play at LAFC, Philadelphia, and at NYCFC in three out of their four games from August 16 through the 31.

The US Open Cup final would have helped Sporting KC salvage something, and while we don’t count the Open Cup it still shows how tough this season is for Sporting. They lost at home to LAFC before and Austin after that Open Cup loss in Sacramento, getting another date with Austin on August 13.