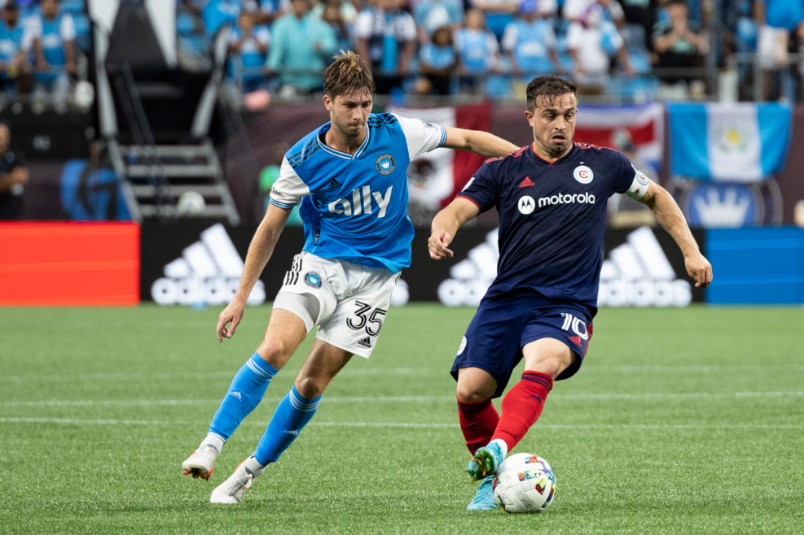 The roundup of Week 24 in Major League Soccer starts on Friday with the Whitecaps coming back to beat Houston 2-1 at BC Place. The Dynamo’s Fabrice Picault opened the scoring in the 6th minute. Vancouver’s Simon Becher equalized in the 88th and Lucas Cavallini scored two minutes into stoppage time.

Moving to Saturday’s schedule, Atlanta beat Seattle 2-1 at Mercedes-Benz Stadium with United’s Ronaldo Cisneros opening the scoring in the 23rd minute. Seattle’s Cristian Roldan equalized in the 68th, but it was Atlanta’s Andrew Gutman scoring two minutes into stoppage time.

“I think it is just a confidence booster,” Gutman said. “Yeah, I scored the goal, but these guys played their hearts for 90 minutes. I came in for 10 minutes and helped the team, and we have been playing great football, but we have to start capitalizing on goals and chances, and I think we will be ok.

Chicago won 3-2 at Charlotte after falling behind to Yordy Reyna’s goal in the opening minute. Kacper Przybylko equalized in the 21st and the Fire took the lead through Federico Navarro in the 24th. Charlotte’s Karol Swiderski leveled the score in the 45th, but Przybylko scored again in the 52nd minute.

“We are still not, you know, putting away as many chances as we should, but we are doing it enough to win, because we play very good defensively as a team,” Chicago coach Ezra Hendrickson said. “Even though tonight we gave up a couple soft goals, we were able to on the road score three goals to win this game and that’s not easy to do, especially in a place like this with those type of fans and that type of atmosphere.”

Montreal and Inter Miami drew 2-2 at Stade Saputo with Romell Quito scoring for Montreal in the 5th minute. Inter Miami was level a minute later from a Gonzalo Higuain goal, but Montreal retook the lead from a Quioto penalty in the 21st. Emerson Rodiguez scored for Miami in the 79th minute.

Columbus beat NYCFC 3-2 at home after giving up a 3rd minute own-goal. Cucho Hernandez equalized in the 20th and Lucas Zelarayan made it 2-1 Columbus in the 22nd. Gabriel Pereira equalized in the 64th, but Zelarayan scored again in the 75th minute.

DC and the Red Bulls finished 0-0 at Audi Field. DC put two of its four shots on goal to New York’s one from 13.

FC Cincinnati beat Philadelphia 3-1 at home with Brandon Vasquez opening the scoring in the 50th. Brenner added a Cincinnati goal in the 55th and Alvaro Barreal made it 3-0 in the 71st. Philadelphia’s Paxten Aaronson pulled a goal back in the 77th minute.

“Based on our home form and our opponent, I don’t think I would have expected us to create as many chances against a very good defensive team as we did,” Cincinnati coach Pat Noonan said. “I was really pleased with that. But having said that, we know when we step on the field in this building, we can play and beat anybody. We’ve shown that. It’s doing it on a more consistent basis that allows you to be more confident players, coaches, all of us.”

New England shutout Orlando 3-0 at Exploria Stadium. Matt Polster put the Revolution up in the 20th and Wilfrid Kaptoum scored in the 51st. Henry Kessler finished off the Revs’ goals in the 75th and goalkeeper Dorde Petrovic made five saves to keep the clean sheet.

“All in all, I think it was a complete performance by the guys,” New England coach Bruce Arena said. “Not that it was perfect, but we had guys playing together, having a really good understand of what they needed to do.”

Toronto beat Nashville 4-3 on the road, taking the lead from a 19th minute Jonathan Osorio goal. Nashville equalized from a 41st minute Hany Mukhtar penalty with Osorio scoring again in the 44th. Teal Bunbury leveled the score for Nashville four minutes into stoppage time. Toronto retook the lead from a 54th minute Federico Bernardeschi penalty with Lorenzo Insigne scoring in the 77th. Nashville’s Walker Zimmerman scored in the 84th minute.

Austin and San Jose drew 3-3 at Q2 Stadium with Austin’s Julio Cascante opening the scoring in the 6th minute. San Jose’s Benjamin Marie equalized in the 20th, but Sebastian Driussi returned the Austin lead in the 26th and scored again in the 44th. Jeremy Ebobisse equalized for the Earthquakes in the 88th minute.

Colorado came back to beat Minnesota United 4-3 at home. Falling behind to a 4th minute Abu Danladi goal, Colorado’s Gyasi Zardes scored in the 7th minute. The Rapids’ Diego Rubio put them up in the 11th and Zardes scored gain in the 15th. Luis Amarilla pulled a goal back for United in the 43rd, but Zardes made it 4-2 in the 61st. Minnesota’s Brent Kallman scored in the 81st minute.

LAFC won 4-1 at Real Salt Lake. Cristian Arango put LA up in the 9th with RSL’s Sergio Cordova equalizing in the 12th. LAFC’s Kellyn Acosta scored in the 17th, Arango added a goal in the 60th, and Gareth Bale finished off the scoring in the 87th minute.