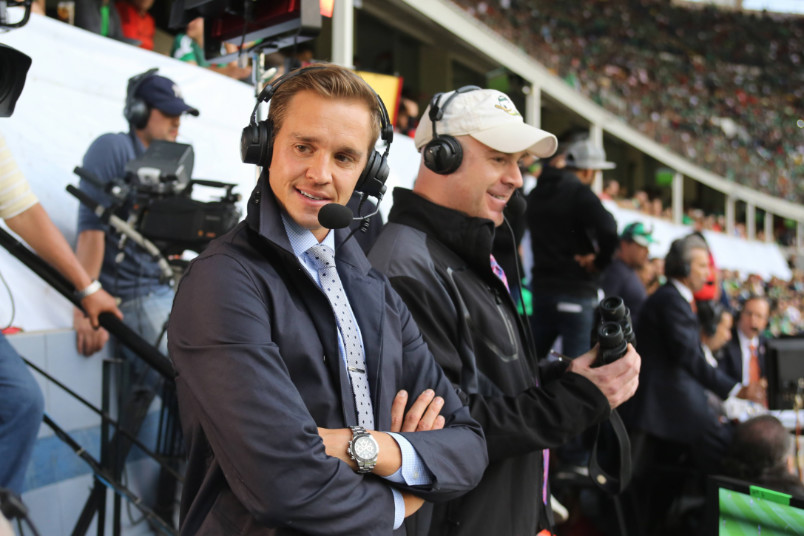 By Clemente Lisi – NEW YORK, NY (Aug 15, 2022) US Soccer Players – Like most of us, former USMNT midfielder-turned-TV commentator Stu Holden is anxiously awaiting the start of the 2022 World Cup. Less than 100 days away, Holden will be working the tournament in Qatar as Fox Sports’ lead match analyst for soccer.

As a player, Holden was on the US roster at the 2010 World Cup, finishing his USMNT career with 25 appearances and scoring three goals. Retiring in 2013 due to injuries, Holden turned his expertise into a TV career. He has worked alongside play-by-play announcer John Strong, calling over 250 matches with him, more than any other English-language TV duo on American television. They’re on track to surpass the 300-game mark during Fox’s coverage of the World Cup, which starts on November 20. Holden also worked the booth for Fox Sports at the 2018 World Cup.

We caught up with Holden, where we talked about what the US needs to do to get out of the group, what to expect from the host nation, and which country will win the whole thing.

With less than three months to go before the World Cup, many want to know the US’s chances of getting out of the group. The better question is how important will the US versus England be towards whether either or both nations advance?

I see the United States and England game as the group decider. The more important games for the US are Wales and Iran because those are games where you absolutely have to get points from. I genuinely think the US will give England a really good run in that match. This English team will come in, as always in every major tournament, with high expectations. They reached the semifinals in 2018 and reached the finals of the Euros (in 2021). They lost in both of those games. This is (England manager) Gareth Southgate’s third major tournament with England and I think the pressure and expectations sometimes get to this squad.

With the World Cup taking place in the winter, will we see better games overall because the players are in top form from club duty compared to when it’s played in the summer?

I feel 100 percent that I think the games will be better because of that fact. I think many people share that similar view. It’s going to be interesting though from a couple of perspectives. From a fitness perspective, you’re going to have guys who will be at their peak fitness level with a couple of months of a domestic season. They will be kind of hitting that gear of routine, playing games at a high level. As a national team you don’t have much time to prepare. Typically, you would have had two to three weeks of training camp leading into the World Cup after the season would have ended. Also, as a national team coach you already get limited days and windows with your players during the course of the season. Now, these coaches, like (USMNT coach) Gregg Berhalter, will have a week before (Christian) Pulisic and a lot of the European guys play that first game at the World Cup.

For me, this will be a completely different experience. I loved the experience in Russia because it was my first World Cup. It’s the biggest sporting event. It’s one where you’re just riding on adrenaline, red-eye flights at three in the morning, landing at seven, getting to the hotel by nine, sleeping from 10am to 3pm, waking up, hitting the gym, getting some food and going to the stadium. That was our routine.

What are you looking forward to most in Qatar that’s not related to soccer?

From my side, I’ve been fortunate enough to be twice already. I got to travel once for a feature shoot with Alexi (Lalas) and the second time, it’s common knowledge now, but I flew there for the World Cup Draw and ended up testing positive for COVID. I was in the country for 10 days recovering. At the very end of that trip, I got to see some of the country, just walking around after testing negative before flying home. I got to see a lot. I am excited to see the country itself and them being on the world stage and hosting millions of people. They do things big. They want this to be the biggest, most spectacular World Cup and they’re making sure the fans coming to the country experience that.

Who is your favorite to win the World Cup? Why?

My favorite is Argentina. I flip-flopped between France. I think they will be dangerous again, but it’s really hard to repeat as a World Cup champion. The last three World Cup champions have gone out in the group stage. I’m picking Argentina because the Copa America win was huge over Brazil. I think that (Argentina coach Lionel) Scaloni is a coach that understands what the team needed to be successful outside of Lionel Messi. I think the supporting cast doesn’t carry the big names perhaps like the past, although it has guys like Rodrigo De Paul and Lautaro Martinez. Of course, Lionel Messi is the one we will talk about so much because he’s the biggest star and among the best players who has never lifted the trophy. He’s been to a final and lost. This is the most complete team back to front.