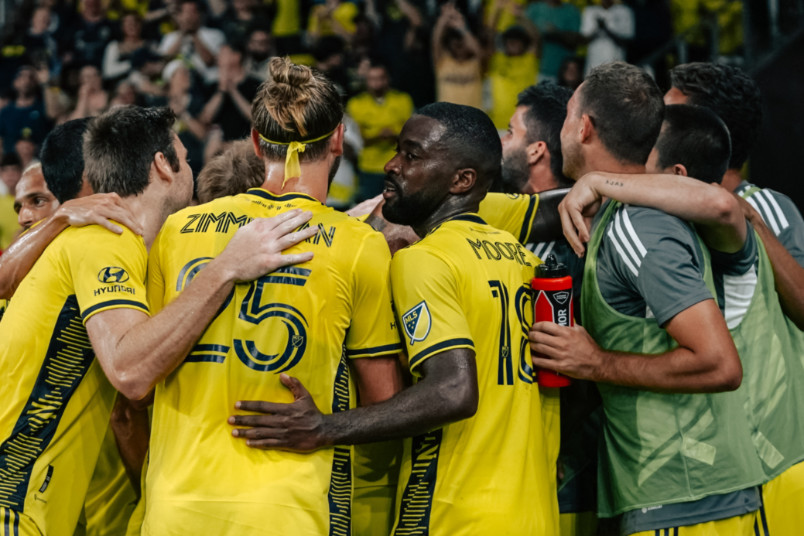 By Jason Davis – WASHINGTON, DC (Aug 26, 2022) US Soccer Players – Nashville SC has a lot going for it. The club opened a brand new stadium this year, 30,000-seat GEODIS Park, and has a passionate, committed fan base in a growing soccer market. Just three years into its Major League Soccer existence, they’re already an established playoff contender.

Success on the field is a function of continuity (the club elevated former MLS Cup champion head coach Gary Smith from the USL version of the club) and smart recruiting. General manager Mike Jacobs is racking up accolades for the work he has done making Nashville a threat to win trophies so quickly.

A healthy part of Nashville’s early success is also due to its American contingent. While other young MLS clubs have focused primarily on foreign players to establish a competitive place in the league, Nashville has consciously worked to maximize the domestic influence on the team.

The move for Moore to MLS brought him home after seven years in Spain. Taking a path less traveled by American players, Moore left his native Georgia to join Huracan Valencia in 2015. He went on to play for two other Spanish teams before Nashville acquired him from Tenerife this summer in a multimillion-dollar transaction. Saturday’s 4-0 win over FC Dallas was just his fifth game in MLS, all of them as a starter.

“Being back home to play has been great,” Moore told USSoccerPlayers.com. “Having family close by and being able to see them on a regular basis has been such a luxury for us. (It’s the) first time that has happened since maybe youth soccer days so that’s good.”

Considering the contrast in style between Spanish football and American soccer and his arrival in the middle of the campaign, Moore’s transition has been relatively smooth. That doesn’t mean it’s been easy.

“What surprised me the most about MLS is the physical demands of the league,” Moore said. “Especially for me coming from time off into the heart and most important part of the season. The travel demands and just the overall athletes partnered with the growing level of play and good players surprised me the most.”

Opposite Moore in Nashville’s back line is Lovitz, an MLS veteran with almost 200 appearances on his resume. An original Nashville SC MLS signing, Lovitz is keenly aware that regular season success is only a means towards getting into the postseason field.

“Anyone is an MLS Cup contender in this league, provided you make playoffs of course,” Lovitz said when asked about Nashville’s chances this season. “This competition is about momentum and being difficult to beat. We’re focused on growth here. We know who we are and what we’re capable of. We continue to focus internally on what we need to execute to reach those goals.”

Experience tells Lovitz that keeping the ups and downs of the season in perspective is important, particularly in MLS. Nashville’s season was made more complicated this year by a shift to the Western Conference and longer away trips and the move from Nissan Stadium to GEODIS Park. The boost Nashville got from the win over FC Dallas can only be seen as temporary with crucial games coming up.

“It’s always important to stay grounded throughout different phases of the season,” Lovitz explained. “Things aren’t always as great as they may seem or feel, just as they may not be as negative and dire as you might expect. Getting over the hump in a win like that at home certainly makes life easier and gets us moving in the right direction but we’re focused on improving on that performance and moving on to the next.”

Nashville’s unquestioned leader is midfielder Dax McCarty, the club’s captain for all three of its MLS campaigns. McCarty is playing his 17th MLS season and was one of the savviest signings Nashville made in the buildup to its expansion year. He remains one of the league’s top defensive midfielders and ranks among the league’s best for progressive passing from his area of the field.

McCarty has had an up-close view of Zimmerman’s play during the pair’s time together in Tennessee and has no trouble identifying what makes the USMNT center back the consensus top defender in MLS.

“I think Walker has improved tremendously in his career, from his trajectory in Dallas, to then LA and now here in Nashville,” McCarty said. “I’ve only played with him now going on three years, but every year he has gotten better and every year he has improved. Every year he has increased his responsibility in terms of his leadership, in terms of his command of the backline, and in terms of his dominance, especially aerially. His ability to break lines and play out of the back, he’s always looking to connect with myself and the other midfielders to try and move the team forward. I’m really happy for him and everything he’s accomplished so far, but I know he’s like me and wants to have that prize and the ultimate goal of winning MLS Cup. So I know he’s not going to be satisfied until we do that.”

It’s fair to say that Zimmerman’s status in the league is as much a function of those other aspects of his game – leadership and passing ability – as it is his obvious defensive qualities.

Defending has been a calling card of Nashville since the club entered the league, but McCarty knows that his team needs to add more scoring punch if it wants to win the ultimate prize. The victory over FC Dallas represented incremental progress on that front.

“I mentioned it in my post-game press conference a few weeks ago that we need to figure out ways for how to get some secondary scoring help for Hany (Mukhtar),” he said. “The Dallas game was a great performance by him, but it was nice to see a score on a set piece, and Jacob (Shaffelburg) get off the mark with a well-taken goal. That’s going to be a big factor for us, and getting back to the basics with our defending, getting shutouts, and making sure we are defending as a group and staying compact.

“I feel like as long as you make the playoffs, any team is a contender,” McCarty continued. “It doesn’t matter what you do in the regular season, we’ve seen that plenty of times throughout MLS history where teams just end up making the playoffs and go on a deep long run. Sometimes they win MLS Cup and sometimes they don’t. I feel like any team that makes the playoffs should feel like they are contenders. I feel like we do have the type of personalities and players in our locker room to certainly be able to contend if we do make the postseason which is our goal.”